Stuck in reverse, Tokyo looks back wearily as the rest of the world looks ahead. The dissonance of the past year has changed my view of the city at least once a week. Living here is to be conscious of alternating lives that run in parallel, with days either counting down or running up. What does it mean to live in the midst of two very different global events? One is the Olympics, the pantheon of all sport, this year spectator-less and out of reach. The other is the pandemic, inescapable for everyone. Both have held up unusual mirrors to the city, and each reflection has felt either too distant or too close to fully comprehend. Questions turn to what might happen next, but there is nagging doubt that the answer is “very little”—as signaled by banners hung from lampposts and buildings for more than a year that still read Tokyo 2020. 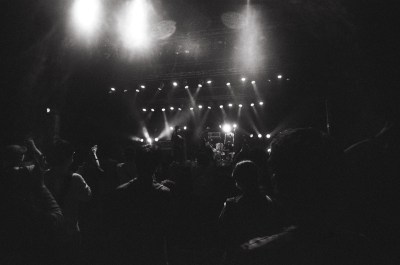 Changes in the seasons came thick and fast, tripping over each other on their way to summer. In June, I ran the gauntlet through driving rain to watch the 40-year-old underground rock band Friction perform in Kawasaki, an industrial city less than an hour to the south that plays home to marginal communities and illegal raves. Escaping Tokyo, I heard my first live music in who knows how long. Along the way I read an interview with the New York painter Taro Suzuki, who started his own experimental band, Youth in Asia, as he left art school in the early 1970s. He recalled an urge to “rage against the death of Modernism” as an artist. How could he paint, he wondered at the time, against a backdrop of war fought on one side of the world, in Southeast Asia, with people on the other side looking up and claiming territory on the surface of the moon for all mankind? Could he make art beyond what Minimalism had fashioned from Modernism’s demise and head somewhere more spirited instead? Music was partly the answer. Temporarily, it was mine too.

Friction formed in Tokyo in 1978, having returned from a year hanging around downtown New York with icons from the early No Wave scene, including Diego Cortez and Lydia Lunch. As visas expired, the band came home and started its own scene known for a time as Tokyo Rockers. It was as notable as No Wave but less organized, in an awkward period for a city full of people with pent-up energy and nowhere to go. Japan wrestled with countries still fighting in parts of Vietnam, and argued with Russia over islands it had lost following World War II. Its economy was heavily affected by the oil crisis in Iran, as it depended on imports with few natural resources of its own. This was in the years before the affluence of the mid-’80s amid a cash-rich “bubble economy” that over-inflated its own worth.

Reading back, it struck me how Friction had brought some of the do-it-yourself mentality of ’70s New York home with them along with a passion to rail against the failures of the modern world. That mindset extended beyond the underground music scene to ideals for a city they hoped could be more personal and individual. Tokyo was not for the faint of heart or the low of income. It was a difficult and expensive place to live, making it easier to invest in yourself than in any plot of land. 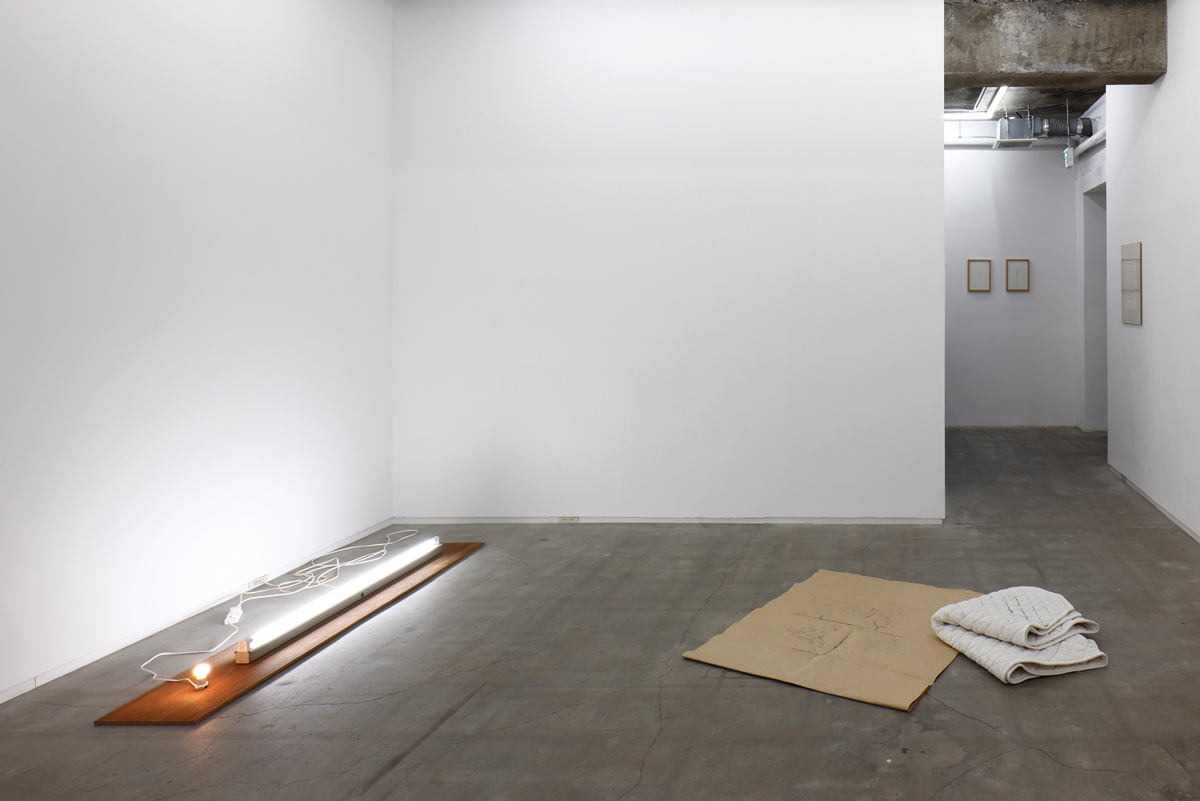 Artist Eri Takayanagi uses words like “liberation” and “attack” to describe the work she makes from found objects. Her exhibition “Demonstration” at Talion Gallery this summer set out to think through the nature of ordinariness. A fluorescent tube had been laid across the floor. A flower pot sprayed with orange paint sat on a roll of paper. A soft blanket and a brown paper sheet had been carefully sprinkled with dirt. Each piece demonstrated its worth in the most plain and immediate way possible, and the exhibition title foregrounded their presence head-on, raising questions about what they might become when free of their usual function.

Around the same time as Takayanagi’s show, demonstrations of a different kind emerged throughout the capitol: silent protests of people with placards dismissing face masks as impersonal and vaccination as an invasion of the body. The demonstrations in both the gallery and the street were concerned with establishing a truth of their own. Each charged ideas of “liberation” and “attack” with different meaning. One expressed the simple joy of imagining something as unprovocative as paper being liberated. The other expressed the freedom of self-determination, shunning authority and the pressure to follow others. In any case, both showed how language these days is being put through its paces.

In the past five or so years, many young artists in Tokyo have opened their own gallery spaces, determined to press ahead on their own terms outside the commercial gallery scene. One of those spaces, Lavender Opener Chair, operates at the end of a quiet street in east Tokyo’s Arakawa neighborhood, a tight-knit patchwork of houses and small stores tied at one end by the tramline tracking through what’s known as Downtown. The space is run by three young artists—Tatsuhiko Togashi, Yoko Pinkham, and Yohei Watanabe—and takes its name from a barstool shaped like a bottle opener they found at a restaurant long since closed. Converted from an old flower store, Lavender Opener Chair is now a white cube gallery with a kitchen, known as Tohmei Diner, that serves food from Yamagata, a city north of Tokyo near the Sea of Japan and a range of mountains.

Togashi, both a chef and an artist, hails from Yamagata, and his culinary skills figure in artwork that involves smell, touch, and taste. Pinkham provides support in the kitchen and, between shifts, weaves tapestries with images of local wildlife in the style of old Nintendo video games. Watanabe manages the gallery side and works as a photographer. All three think of their space as a chance to work with others, and with the culinary component, Lavender Chair Opener could almost be a distant cousin of Food, the New York restaurant started in SoHo in the ’70s by Carol Goodden, Tina Girouard, and Gordon Matta-Clark.

Hunkering down for the long summer, Lavender Chair Opener had hoped to connect with communities farther afield. At first they invited artists from overseas to exhibit, but this proved difficult as the pandemic dragged on. Earlier this year they limited gallery opening hours to weekends, then closed the kitchen as pressure rose to limit the sale of food and drink. The connections they had longed for now seem a long way off. But artist-run spaces in the local scene support each other as best they can, counting on personal connections as the only way of working through an awkward and uncomfortable situation. 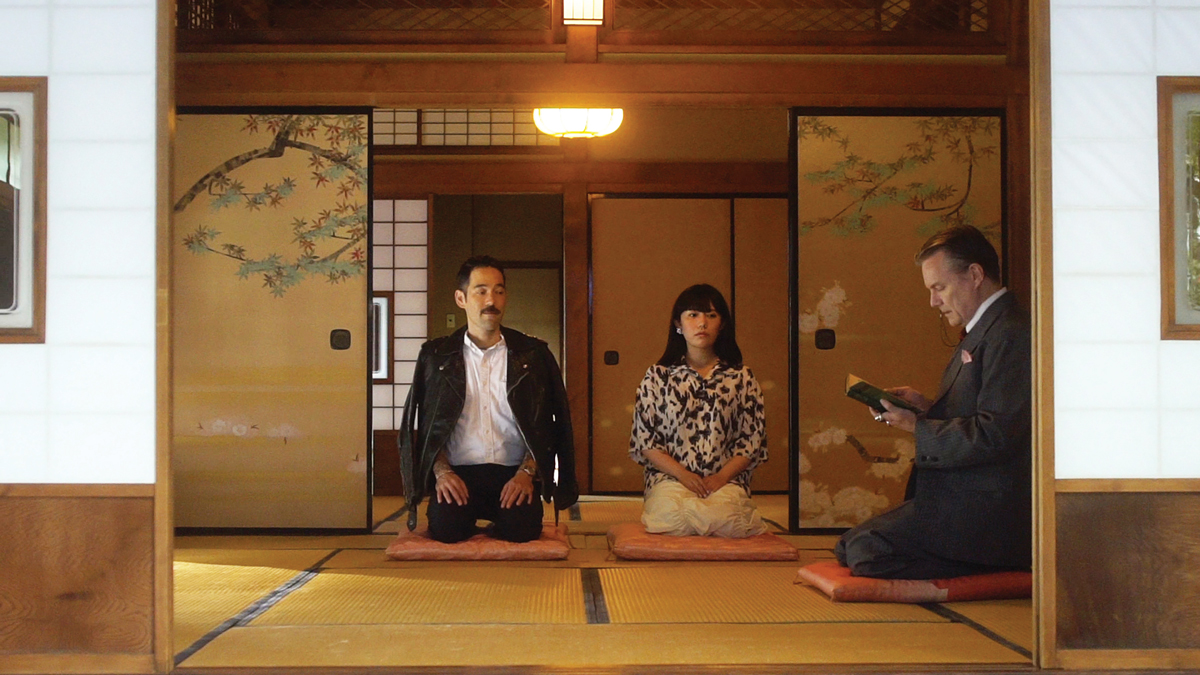 Artist and filmmaker Yu Araki drew connections between stories of etiquette and strange myth in his short film Honeymoon, which premiered in July in France at the FIDMarseille—Marseille International Film Festival and was scheduled to show this fall at Tokyo’s 35th Image Forum Festival. The film follows a fictional wedding ceremony in which the character of Adolf de Meyer, a real-life photographer and alleged spy from Paris, marries a young bride in a scene inspired by Carmine Gallone’s 1954 film Madame Butterfly (in which a U.S. naval officer marries a young Japanese girl).

During the ceremony, both de Meyer and his bride sit on the floor with their legs tucked under their knees in the traditional position known as seiza, which carries rich historical significance in Japan. Following the end of military rule after political revolution in 1868, imperial rule was restored under Emperor Meiji, and trade with foreign countries became a bid for social reform. But an accompanying fear of subjugation cast seiza as a way to distinguish Japanese culture from foreign customs. In spite of the pain it causes, seiza was considered the proper way to sit, in contrast to other cultures that privilege sitting on a chair.

Araki left Japan to study in the United States as a teenager in the mid-’90s and soon discovered the 1996 album Pinkerton by the rock band Weezer. It was a signpost for the haze of alternative culture back then, but it also struck a chord with something more personal. Pinkerton was the name of the naval officer from the Madame Butterfly film, and lyrics from the Puccini opera on which it is based expressed how transient cultures can be: “Everywhere in the world, the roving Yankee takes his pleasure and his profit, indifferent to all risks. He drops anchor at random.”

While one meaning of the word seiza was ingrained in a tradition of correctness in the late 19th century, the same word also describes a constellation of stars—pointing to what Araki calls the “twisting imagery of Japanese culture.” The story behind Honeymoon, about sitting on the floor in obligatory pain, is Araki’s way of tracing a route through a maze of history and etiquette no less constructed from randomness than a seiza of stars named after Greek mythology.

The Olympic tradition imposes the same mythology on today’s sporting achievements. And like a broadcast of the Summer Games, Araki’s film features commentators discussing the event at the center of it like a celebrity marriage on TV. The ceremony drags on as they talk about fashion choices and the weather. The bride and groom wait patiently until their legs fall asleep and they are unable to stand, falling back to earth in slow motion in a final twist that plays on the fact that the story being told is not set in Japan but on a fictional moon base called Nagasaki, named after the harbor city that officially welcomed the first European visitors to Japan in the 1600s. 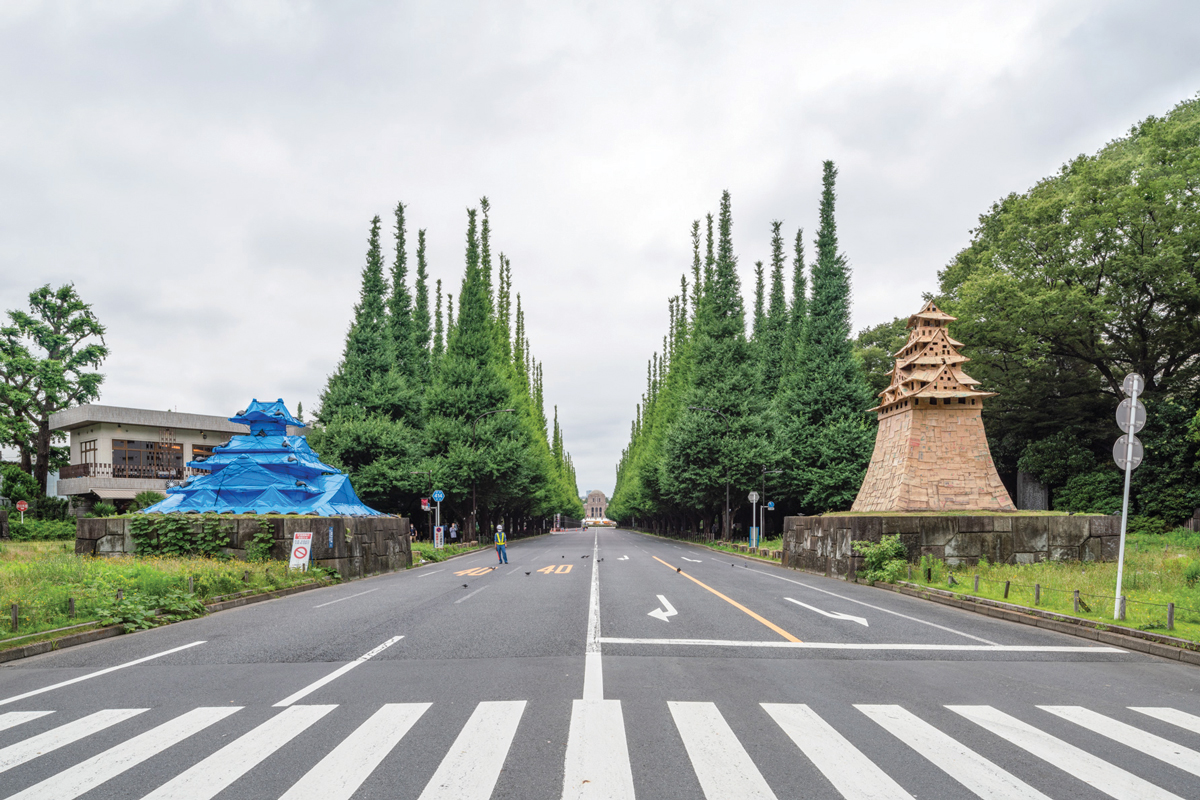 Makoto Aida’s Tokyo Castle at the entrance to Meiji-jingu Park leading to the Olympic stadium.

The motto for the Olympics this summer was “United by Emotion,” but every time I saw it written on a billboard or posted on a wall I wondered: which one? Was it elation, fascination, frustration, panic? A shrug of resignation, maybe?

On either side of the entrance to Meiji-jingu Park leading to the Olympic stadium stood sculptures by Makoto Aida. Titled Tokyo Castle, the pair of pavilions sat on what were once stone walls from the old Edo Castle, which now form part of the Imperial Palace. The piece on one side was wrapped in blue tarpaulin and the other was covered in cardboard—materials for temporary structures that stood in stark contrast to the stadium itself.

Blue tarpaulin had become a sign of disaster and recovery in recent years. It had been used to cover the topsoil removed from Fukushima and the Daiichi nuclear power plant. It also covered up earth from recent landslides in the coastal town of Atami.

The cardboard covering the other structure also touched a nerve, echoing the makeshift dwellings of Tokyo’s homeless. Slowly but surely they were moved out of sight to make way for the Summer Games. Like characters from Araki’s Honeymoon, they found themselves cast out as fleeting figures, meaningless in the modern mythology of their own city.

A version of this article appears in the October/November 2021 issue of ARTnews, under the title “Celestial Nobodies.”