He distrusted visual description—funny thing for an art critic to distrust—but let’s start with some, anyway. Thick hair, superhero jawline, impasto eyebrows, rugged mustache, six foot four (the better to glower down on civilization). In a 1964 portrait by his friend Saul Steinberg, he looks like Bert from Sesame Street, but as a younger man he’d been a great beauty. After his death in 1978, he appeared under the name Victor Wulpy in “What Kind of Day Did You Have?,” a Saul Bellow story à clef that mentions both his “silken scrotum” and his “exquisite toes.” Right up to the end, he was overindulging in the three main New York literary vices (adultery, alcohol, egomania) and making new enemies. But if Bellow is to be believed, “Even his bitterest detractors, the diehard grudgers, had to admit that he was still first-rate.”

Yet the fact remains that Harold Rosenberg is to the intellectuals of midcentury Manhattan what Andrew McCarthy is to the Brat Pack of 1980s Hollywood—the most minor of the major, the one people may have heard of but couldn’t tell you much about. He wrote for Partisan Review, Commentary, and the other august little magazines that flourished between the rise of the New Deal and the fraying of the New Left. At the time of his death, he’d been the New Yorker’s art critic for twelve years. He knew everyone, sat on all the panels, went to all the parties; he even had an archnemesis in the art critic Clement Greenberg. He proposed daring theories and coined arresting phrases, most of which have been banished to the dustier corners of the library. Still, one good biography is all it would take to get a comeback going. 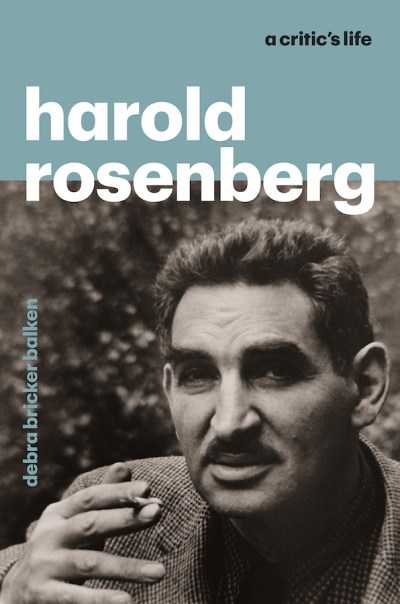 Instead, he got Harold Rosenberg: A Critic’s Life. Debra Bricker Balken has dug the man up, only to bury him in sentences like “Rosenberg’s sense of ostracism affected him emotionally.” That tiring little tautology, from chapter one, sets the tone for the next six hundred pages. For instance: “Rosenberg’s ramblings on Stalin engendered trust during a period when the Communist Party induced trepidation in many leftist thinkers who had witnessed similar taunting to what Kenneth Burke had endured at the American Writers’ Congress.” Ramblings, indeed—did the Estate of Clement Greenberg bribe Balken to write like this? The question isn’t entirely facetious. The best way to enjoy this book, in fact, may be to treat it as one big joke: sluggish writing about a writer whose signature idea was action.

Born in Brooklyn in 1906, Rosenberg belonged to the first generation of thinkers to grow up with a Marxism that had finally made good on its promise to change the world, not just describe it. In 1927, he graduated from Brooklyn Law School, where he later said he’d spent most of his time learning about Modernist aesthetics and the new Soviet Union. By 1937, news of the Great Purge had reached the US, and Rosenberg had made a name for himself as an anti-Stalinist Marxist in the pages of Partisan Review. That year, he marched down Broadway with the Communist Party of New York, chanting “We write for the working class!” The neocon Norman Podhoretz would later mock Rosenberg for the pompousness of that chant, and he had a point (still—talk about the pot calling the kettle black). Pompousness came easily to Rosenberg’s generation of intellectuals —but that’s what happens when you grow up with an international revolution inspired by a stack of economics texts. Ideas were life-and-death. They had to be fought for, in print and in the streets. They were worth being pompous about.

The key, for Rosenberg, was action. The word shows up throughout his criticism and Balken’s biography (though only Balken has the annoying habit of putting it in italics, lest we forget how meaningful it is). Like many simple words used in highly technical senses, action is easy to point to and hard to define outright; Rosenberg himself reworked the concept so many times it’s tempting to say he never really defined it at all. To act meant to assert one’s place in the world as an individual, but also to brush aside second-hand ideas and think for oneself, but also to embrace uncertainty and live with courage, but also lots of other things, held together with a dab of macho mysticism. Lenin was a man of action. So were Trotsky and Captain Ahab and Prince Hamlet. Rosenberg seems to have thought of himself in the same exalted terms (no point founding a club unless you get to be a member), and not totally without reason. He marched and chanted and painted and penned poetry and criticism, always with the same swaggering enthusiasm.

Rosenberg may have been a man of action, but he couldn’t do everything he thought he could. To say that his poems haven’t aged well would imply they were fresh to begin with. Many sound as if they’d rather be criticism; one features the refrain, “A raised arm has many meanings.” Another, published in Poetry in 1935, describes a kind of effortless creative vigor Rosenberg could never quite channel:

A language on which the sun flows

for the first time! The page is

blue and yellow and a touch of

Ezra Pound this isn’t, though not for lack of trying (the less said about that “exceptionally,” the better). But when abstract painting came to the fore after World War II and art critics were taking a moment to gather their thoughts, Rosenberg knew what to say, because he’d already more or less said it in the pages of Poetry.

It’s strange how many big, revolutionary ideas are really old ideas dusted off the night before. “The American Action Painters,” published in ARTnews in 1952, was Rosenberg’s blockbuster, the one that got people talking, the one art historians will still be fighting about fifty years from now. The core concept was the same as ever, but this time concept fit form so snugly it was almost eerie, as though all the leading Tenth Street avant-gardists had read Rosenberg’s poem back in 1935 and spent the war years mulling it over. In their new abstract paintings, image was inseparable from gesture; the white canvas, no less than the white page, was a sprawling frontier to be colonized with blue and yellow and a touch of orange. Aesthetic conventions were as useful here as a road map at the bottom of the ocean—if anything, action painting proved the obsolescence of aesthetic style. From now on, only bold, self-sufficient brushstrokes, applied by a bold, self-reliant artist (Rosenberg had his friend Willem de Kooning in mind, but readers imagined their own favorites), would prevail.

For about six weeks of the ’50s, per Morton Feldman’s famous line, nobody understood art. “The American Action Painters” offered its readers a powerful tool for making sense of art once again, and in doing so it helped make the avant-garde safe for museumgoers and collectors. De Kooning and his peers took off. Rosenberg had backed the right horse, and he was pleased with himself. “So far,” his essay concludes, “the silence of American literature on the new painting all but amounts to a scandal”—a victory lap disguised as a finger-wag. 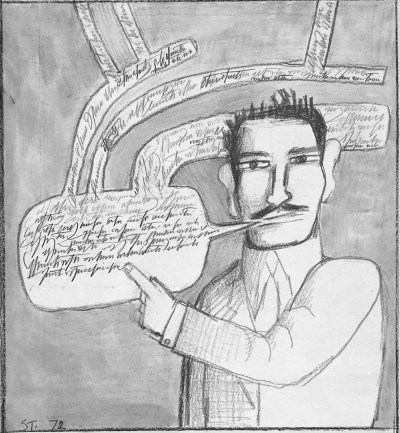 “It was an ironic stroke of fate,” Balken writes, “that the most prolific phase of [Rosenberg’s] career came late and was associated with art criticism.” What Balken seems to mean is that Rosenberg had barely written about aesthetics before 1952 and pivoted from philosophy to visual art around that time, after which he spent the rest of his life bounding from brilliant review to brilliant review. I would propose a simpler irony: Harold Rosenberg was not an especially good art critic.

He was good at thinking and writing, but not at noticing what was right in front of him. “The American Action Painters” describes zero paintings and names zero painters, though it does find the time to mention Kierkegaard once and Whitman twice. More astonishingly, it implies that description has become an outdated form of art criticism—what’s the use if style is obsolete and action is everything? This cavalier vagueness ended up working to Rosenberg’s advantage. He had reservations about Pollock’s drip paintings (“apocalyptic wallpaper,” he sneered), but because his essay never mentioned Pollock by name, most readers assumed he was a fan, and both men’s reputations got a boost.

Encouraged (or enabled) by the success of “The American Action Painters,” Rosenberg began writing like a parody of an aloof, tweed-jacketed professor and overusing the word “history.” Balken thinks that the New Yorker forced him to roll up his sleeves, but a few months before his death he was still issuing stern proclamations like, “The aim of every authentic artist is not to conform to the history of art but to release himself from it, in order to replace it with his own history.” The review in question is about collage artists, not that it really matters—it might as well be any New Yorker review Rosenberg ever wrote.

When a critic gets hooked on a big idea, the main question becomes whether the work of art at hand affirms it (in which case, bravo) or disputes it (in which case, boo). Rosenberg found his big idea fairly early on and pampered it like a puppy. But in order to thrive, ideas need to be tested against individual works, sharpened against the whetstone of the new. T. S. Eliot’s famous praise for Henry James’s criticism—“He had a mind so fine no idea could violate it”—was of no concern to Rosenberg. His idea of action was so elusive no artwork could disprove it, not even the novels of Henry James or the poetry of Eliot, both of which he suavely dismissed (Lambert Strether and J. Alfred Prufrock conclusively not being men of action). And while Rosenberg was always better with ideas than individual artworks, he could be surprisingly naive about the implications of action, too—probably because, by 1952, he was relieved to find any example of his pet idea anywhere at all. Even when Mary McCarthy praised a collection of his essays in the Partisan Review in 1959, she couldn’t resist pointing out that action painting had become one more in a long line of aesthetic styles, i.e., the one thing Rosenberg had insisted it wasn’t.

In hindsight, you can detect something a little defensive about McCarthy’s enthusiasm. In Balken’s biography, too, there’s a sense that Rosenberg was better than the sum of his writings, or that writing was a mere shadow of his true genius, which he trotted out around 3 AM for audiences of half a dozen, somewhere on the Upper West Side. But intellectuals—or at least pre-Y2K intellectuals—are remembered for what they write, not what they say at parties, and soon after Rosenberg died, his reputation began to dim. If he were alive today, he’d probably have a great podcast. In any case, “The American Action Painters” will go on being taught, which means his name will survive as long as de Kooning’s or—such irony!—Pollock’s. Ideas in the humanities rarely catch on because everybody agrees they’re true; more often, everybody thinks they’re about half-true and nobody can agree which half is which. With “action painting,” Rosenberg coined a vivid phrase that had a shade of mystery and a spark of truth, and it got people talking. Maybe he was a great poet all along.

A new biography of the midcentury critic Harold Rosenberg offers an unconvincing case for his reappraisal.