A new Roman temple has been discovered by archaeologists in the ancient Phoenician city of Tyre, located off the coast of Lebanon. The joint excavation, led by María Eugenia Aubet (Pompeu Fabra University of Barcelona), Ali Badawi (General Directorate of Antiquities of Lebanon), and Francisco J. Núñez (Polish Centre of Mediterranean Archaeology, University of Warsaw), focused on the massive structure.

Two phases of construction have been identified, placing the temple in the early Roman period (about 31 B.C.E. to 193 C.E.) with a major modification in the late Roman period (about 284 C.E. to 476 C.E.). The temple is situated in the Tyre Acropolis, the highest point of the land mass, which Greek and Phoenician inscriptions describe as a sacred area. Researchers believe many cult-related rituals and worship activities would have taken place here. 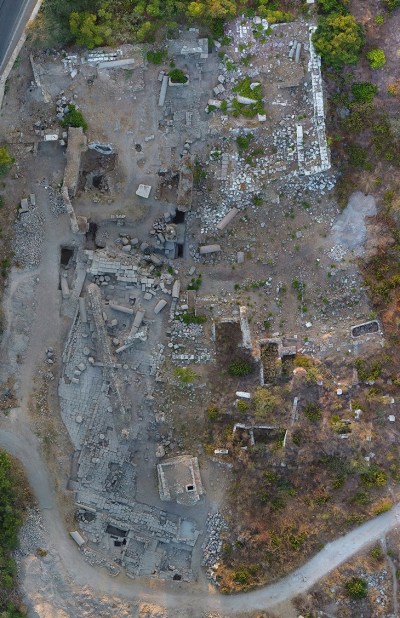 “Its location on a podium in the most elevated area of the ancient island highlights this building’s particular status,” said Núñez in an email.

The rectangular building is east-west in orientation, with a vestibule flanked by two columns, and a podium on the other side. Temple walls were originally comprised of sandstone blocks, and the building stood on a platform made of limestone and sandstone. The 26-foot-high columns were made of Egyptian pink granite, and the stepped entryway was decorated with engraved slabs featuring geometric motifs.

“It is one of but a few buildings of this character found in Tyre to date,” Núñez wrote. “Our knowledge of Tyre in Antiquity, despite the great prominence of the city, is unfortunately quite limited.”

Researchers believe there may have been a subterranean chamber located south of the entrance. The exact object of veneration at the massive temple remains a mystery. “At least for now, the name of the deity worshipped in this building remains elusive to us,” wrote Núñez.

The porticoed street that descends from the temple intersects with a narrower street leading to a nearby shrine, with two rooms and a courtyard. This smaller structure is oriented north-south, with one room featuring an Egyptian relief that portrays the goddess Isis breastfeeding her son Horus as a child. 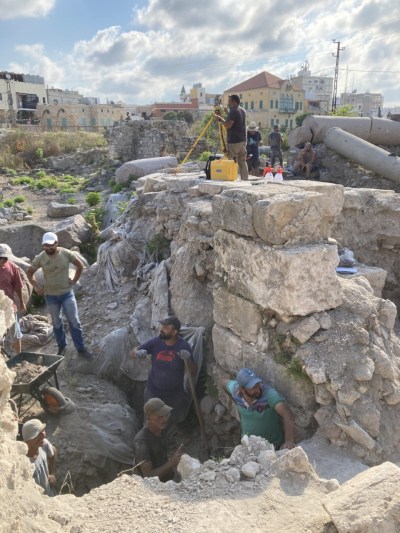 Work in the location of the Roman temple’s facade, with the foundation of a column in the foreground.

Tyre is one of the oldest continuously inhabited cities in the world, with a long history of settlement dating back to the 3rd millennium B.C.E. It has long been a significant port and trading center in the Mediterranean region. During the Bronze Age and Iron Age, around 1,200 B.C.E. to 868 B.C.E., it was an independent Phoenician city and a site of major economic importance, including industry, commerce, and crafts.Originally located on an offshore island, Tyre was connected to the mainland by a causeway built by Alexander the Great.

Buildings constructed over five millennia by various cultures have made Tyre a difficult archaeological site to investigate, with layers of occupation overlapping each other. “The superimposed architectural remains, along with natural catastrophes, the rise of the sea level, and the dynamic land development and public works in the recent decades efficiently obscured the character of ancient architecture,” Núñez said in a statement.

The area around the temple was severely damaged and reconstructed in the Early Byzantine era. The temple itself was dismantled and replaced by a large basilica, which was eventually destroyed along with other parts of the city during a tsunami in the 6th century C.E.

Work will continue at the site in 2022, with further investigations of the Roman temple and surrounding area. Researchers plan to determine whether a second monumental building, located to the north, is another temple.

The temple’s location “in the most elevated area of the ancient island highlights this building’s particular status.”