Michael Richards was obsessed with flight. His imagination glided at a high altitude, producing a rigorous body of work filled with wings, planes, pilots, and myths. So fascinated was he by aviation that when he died, aged thirty-eight, on September 11, 2001, his art was said to have foreshadowed his fate.

“Are You Down?,” the artist’s first retrospective, brings together his sculptures, installations, and dozens of drawings at the Museum of Contemporary Art North Miami. Many of the works have been freshly unearthed, after being stored for years in Richards’s cousin’s garage, thanks in part to the cocurators, Melissa Levin and Alex Fialho, who previously organized “Winged” at the Lower Manhattan Cultural Council in 2016—then the largest display of Richards’s work since his untimely death.

Richards was born in New York in 1963 and grew up in Kingston, Jamaica. After studying at New York University, he found his place in the city as a sculptor in the 1990s, an era animated by the upsurge of multiculturalism. Those days seemed to promise new advances for Black artists, an ingress into the all but impenetrable halls of institutions. But Richards remained acutely aware of the “doubt and discomfort,” he wrote in an artist statement, “which face Blacks who wish to succeed in a system which is structured to deny them access.”

His work was exercised by this preoccupation, and he seized upon the history of the Tuskegee Airmen—who in the 1940s were the first Black aviators to serve in the U.S. Army Air Corps—as a potent metaphor for that condition. For Richards, the airmen, cutting swiftly through skies, embodied that exhilarating, elusive abstraction—freedom. Yet they were beset by what he called the “tension between assimilation and exclusion”: though they lent themselves, however nobly, to the international interests of America, they remained second-class citizens.

Richards’s bronze figures, often cast using his own body, are perturbed by a forlorn, Icarian spirit. One gets the impression that they were intent on some aspiration before being abruptly impeded, plummeting to their demise. Notice, for instance, all those heads strewn about a target that lies at the foot of Climbing Jacob’s Ladder (He Lost His Head), 1994. Perhaps the ladder, which resembles Donald Judd’s sleek, reflective “stacks,” is pitched toward the coveted success in an art world that routinely valorizes a privileged few. Or observe the shattered winged torso toppled from its base in The Great Black Airmen (Tuskegee), 1996. One feels the empyrean drive alongside the devastated ambition. 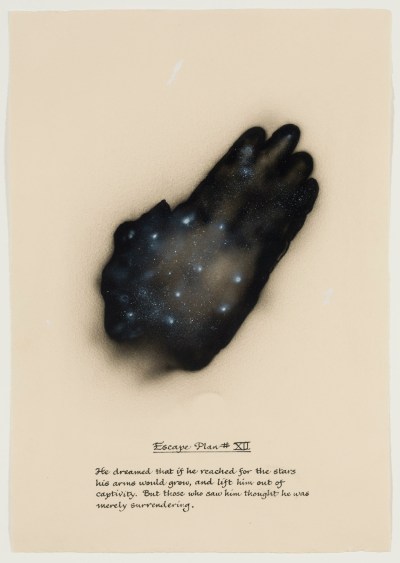 Nowhere is that devastated ambition more vivid than in his drawings. Over and over in the series “Escape Plan” (1996–2000), the promise of a way out is blighted by a crushing futility. Escape Plan XII, for instance, shows bright stars swirling against the dark silhouette of a hand. The accompanying text reads: “He dreamed that if he reached for the stars his arms would grow, and lift him out of captivity. But those who saw him thought he was merely surrendering.”

The show’s title work renders in fiberglass, bronze, and resin a life-size trio of downed pilots slumped on the ground with their backs facing one another. With their frayed, abraded jumpsuits and downcast heads, they look as though they slipped out of the pages of Ralph Ellison’s 1944 short story “Flying Home,” in which a Tuskegee Airman, Todd, wrecks his plane (“the only dignity I have”) in a field and is bedeviled by a frantic, febrile interior monologue: I must excel despite the odds, I must be a credit to my race, I mustn’t let them see me down, goes his mind.

Walking through the exhibition, viewers might be dismayed to find so many figures gripped by those anxieties. But one figure appears to buck them. In Every Nigga Is a Star, 2000, a metallic, uniformed man straddles a comet like a bull rider, poised to careen through the cosmos. This work was presumed lost in the destruction of the World Trade Center, where Richards had a studio, so a large-scale photographic reproduction suffices. Surely, the comet will disintegrate; surely our protagonist will fade with it. No matter. His is a flight propelled by the pleasures of transcendence, by the casting off of constraints, by a giddy, heedless, even lethal defiance. Call him a maroon of the air.

For Michael Richards, the history and symbology of flight provided a language for addressing structural racism and the inequities facing Black artists in America.