Skip to content
Turning the Tide: “Sun & Sea” at the Brooklyn Academy of Music

The thing that most reviews and features haven’t conveyed about Sun & Sea (Marina), the acclaimed opera about climate change that won Lithuania the 2019 Venice Biennale Golden Lion award, is the strange delight of experiencing it live. The work recently made its US debut at the Brooklyn Academy of Music, where, as at other venues, the audience stood on a platform, ringed round a medium-size room, that made the human performers below resemble animals on display in a zoo pit. The performers lounged on an artificial beach and conversed and frolicked as if they were actually by the sea; from those reclined body positions, one-by-one or occasionally in chorus, they sang songs that registered poetic intuitions about humans’ irresponsibility toward their environment (“vacation is what killed the mammoth”). The accompanying music, mellifluous and repetitive, suffused the space with languid washes of sound.

What’s hard to convey, yet essential to the experience, is the way this unnervingly pleasant spectacle felt by turns detached and immersive. The set contains neither sun nor sea, only sand and plastic and unnatural light; the opera is estranged from the elements in its title. The elevated vantage point—with viewers thronged around the platform railing, observing both the performers and each other—makes the audience feel literally and figuratively above the dramatic action, almost godlike. Yet the music, soothing as a spa bath, is all-encompassing—physically absorbing—and the libretto emphasizes the importance of sensory experience to both climate awareness and climate obliviousness. The Wealthy Mommy character (one of several “types” in the cast), for instance, gushes discordantly about how an unwell section of the Great Barrier Reef is “an amazing sight”: “Those coral horns, that bleached, pallid whiteness / You have to see it, words cannot describe it.” Sun & Sea encourages audiences to feel, bodily, the extent to which they’re disconnected from the abstract knowledge of climate change that they already possess. 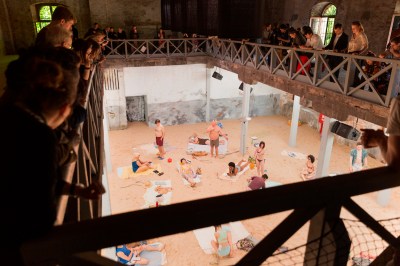 Perhaps the strangest part of that feeling is its familiarity, the way in which, well before attaining knowledge of anthropogenic climate change, humans did their best not to think too hard about the extent to which innocuous-seeming pleasures (such as tobacco or clothing) can be systemically bound up with others’ pain (as with slavery or sweatshop labor). “The banana comes into being, ripens somewhere in South America / And then it ends up on the other side of the planet,” sings the sunbathing Philosopher character. “It only existed to satisfy our hunger in one bite / To give us a feeling of bliss.” Sun & Sea is a bit like that banana, mysteriously arriving from elsewhere to provide temporary hedonic pleasure, while also, unlike the banana, raising questions about that pleasure’s hidden or repressed costs.

Director Rugilė Barzdžiukaitė, librettist Vaiva Grainytė, and composer Lina Lapelytė’s canny use of the opera form highlights such ethical and experiential binds. For arts audiences, Sun & Sea’s animating paradox—that our species remains complacent and self-absorbed in the face of climate disasters—will be a familiar message. Neither that premise nor the work’s eschewal of didactic content and apocalyptic dramaturgy quite accounts for the rapture Sun & Sea inspires. More than anything, audiences respond to the way the opera delivers such messages with a self-reflexive blend of artifice and authenticity: unconventional staging, vérité casting and acting, vibratory music.

The performance can be understood as artistic consciousness-raising, which has been one of two main historical rationales for eco-oriented art (the other being more direct environmental remediation). Yet it’s a quite particular kind of consciousness-raising, one that offers sensory immersion rather than abstract information. This approach fits with the trend for immersive art installations, from transparent cash grabs such as the Museum of Ice Cream and digitized Van Gogh experiences to Instagram traps with a veneer of activism or artistry, such as the recent Bushwick pop-up climate installation-cum-lounge, “Undercurrent,” or the high-art haunted house by the artist collective DRIFT at The Shed, “Fragile Future.” Whatever its efficacy at raising climate awareness, Sun & Sea stands out for its self-awareness, for its recognition that art can put audiences in touch with the conflicting realities of their own behaviors in the gallery and beyond.

The opera can be understood as a consciousness-raising effort, with a self-aware approach that is both immersive and unconventional.