A Reunited History: Jacob Lawrence at the Phillips Collection

It seems fitting that the Phillips Collection’s centennial celebration would include a major exhibition of works by painter Jacob Lawrence, whose career was deeply entangled with the Washington, D.C., institution. Collector Duncan Phillips, who founded the museum with his mother, was one of the artist’s early champions who solidified his support by purchasing all odd-numbered panels of Lawrence’s sixty-part epic “The Migration Series” (1940–41) a year after its completion. That series, portions of which are always on view as a vital part of the museum’s vast collection of European and American modern art, is a significant reflection on how the lingering legacies and consequences of slavery affected the development of the United States. During a time of widespread protest and political chaos in the United States—where white supremacy and anti-racist activism collide and historians and educators fight for a more inclusive and truthful narrative of American history—the thoughtful Phillips Collection exhibition “Jacob Lawrence: The American Struggle” presents an older, recently reunited series, titled “Struggle: From the History of the American People” (1954–56), to provide a useful lesson in constructing history.

In thirty panels, “Struggle” interprets key and lesser-known moments from the years up to and after the American Revolution; the titles often quote pamphlets and letters that capture the attitudes of that time. Created during the start of the Civil Rights movement, Lawrence’s work represents a more complicated narrative of America’s beginning in which the white founding fathers’ struggle for independence is entangled with that of Black, Native American, and enslaved populations.

The story commences with a panel titled …Is Life so dear or peace so sweet as to be purchased at the price of chains and slavery? —Patrick Henry, 1775 (1955). This line from the lawyer’s advocacy for the freedom of the American colonies from British rule, which led to his appointment as commander of the Virginia militia, appears in the caption just below Lawrence’s image and animates a multiracial crowd of colonists, their fists raised in anger against oppression as they are surrounded by crimson gashes symbolizing the violence inherent in all revolutionary causes. Across the cycle of panels, scenes of Black and Indigenous courage and resistance are amplified against a presumed backdrop in which the ongoing fight for peace and universal equality is never won. This paradox—where legislated slavery and displacement continue within a “democratic” society—is encapsulated in the title of Panel 5, We have no property! We have no wives! No children! We have no city! No country! —petition of many slaves, 1773 (1955). The cited petition was written by an enslaved Massachusetts man known only as Felix. His words electrify Lawrence’s imagery, a brutal and chaotic collision of bodies, rifles, and bayonets that does not represent a specific revolt, but stands for the many slave rebellions that took place during the early decades of the nation’s founding and were never memorialized in art.

Another underemphasized facet of U.S. history is boldly rendered in Panel 21, which presents American soldiers in blue-and-white uniforms in the midst of battle against Shawnee warriors during the 1811 Battle of Tippecanoe. A dense, jarring weave of arms and weapons in a tight chevron pattern communicates the strength of both forces on the battlefield, but Lawrence positions the Shawnee fighters at the top of the pictorial field, where they loom over the Americans like a waterfall. While the Shawnee were eventually defeated in 1813, Lawrence chooses to represent the tipping point and thus suggests the possibility of an alternative story in which Native American peoples retain their sacred homelands. Lawrence ends the sequence with an image of covered wagons heading West, its simplicity disturbed by the blood-red ooze seeping out of the side of a cart—an uneasy reminder of both the utopian and colonialist dimensions of Manifest Destiny and the uncertain outcomes of the nation’s quest to secure freedom for some. 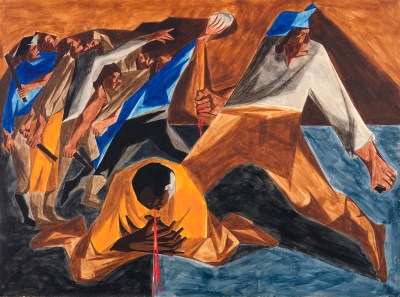 These horrific costs as well as the many specific contexts of Lawrence’s paintings can be hard to process all at once. Soft gray walls and dim lighting encourage viewers to get close to the works and spend time with Lawrence’s extended captions and the curator’s richly researched wall texts. And while each panel measures roughly twelve by sixteen inches, Lawrence’s compositional economy, dynamic figural arrangements, and electric use of color distill these harsh realities of continual conflict into an expressive and nuanced visual poetics. For instance, in Panel 2, which illustrates British troops firing on a crowd of colonists in 1770, Crispus Attucks, a man of African and Wampanoag descent who escaped from slavery to join the cause against the British, has just fallen to his knees. His softly mounded figure is in the midst of collapse: blood pours from his mouth as he grips his chest while his protesting comrades form a human pyramid around him. Like Attucks, figures throughout Lawrence’s series convey an intensity of action even in images of presumed stillness. The subject and composition of this panel also capture the triangulation of these struggles for freedom, where enslaved people would fight for whichever side of the American Revolution seemed more likely to fulfill the promise of liberty.

Built from striations of ochers, deep browns, and beige earth tones, these paintings show Lawrence turning away from the more graphic elements and jewel tones of “The Migration Series” toward visceral imagery in a corporeal palette. Such formal details convey both passion and violence, mirroring Lawrence’s two central themes: an unbridled belief in the nation and a relentless fight for true emancipation for all—the two poles of our American project.

A decade after his celebrated “The Migration Series,” Jacob Lawrence painted the story of the beginnings of America, including competing struggles for independence.