Amid the Wealth of the Hamptons, an Indigenous Artist Builds a Residency for BIPOC Creators

Jeremy Dennis, a photographer, educator, and tribal member of the Shinnecock Indian Nation, spent the past year and a half renovating the home where he grew up on Long Island’s East End. During the first wave of the pandemic, Dennis had been living with his parents, after his plans to attend artists’ residencies had been cut short. While there, he thought there would be no better time to dedicate himself to renovating his family’s house, which had been abandoned for a decade. The house would give him a place to live and make art, but it became obvious to him that the space was too large for just himself.

That led to Ma’s House and BIPOC Art Studio, a new residency for artists of color on the Shinnecock reservation tucked between Shinnecock Bay and the ritzy town of Southampton. “There’s such a disproportionate wealth gap out here,” Dennis said the setting he calls home. One in five Shinnecock tribe members live below the poverty line, so resources to make projects like Ma’s House happen are scarce.

The house was first built in the 1960s, cobbled together from scrap materials, including joints and studs salvaged from an old church that dates back to the 1800s. Jeremy’s grandmother, Loretta Silva—also known as Princess Silva Arrow of the Shinnecock Nation who also went by “Ma”—raised her family there. “My mom and her five siblings grew up in this front of the house,” Dennis said of the site where his grandmother brought the community together for backyard powwows, pony rides, and traditional foods and crafts.

By the time Dennis was 13, with floors caving in from water damage, the family had to move out. “It was just so degraded,” he said. For 10 years, the house stood empty, relegated to use as storage space “full of archival material,” Dennis was quick to note.

Dennis was able to restore the house by appealing to wealthy Hamptons residents. He launched a successful GoFundMe campaign explaining that Ma’s House had an important history in the community, and by raising it up again, the space could be used not just for Dennis’s own benefit but as a kind of cultural center that would host residencies and invite members of the community, both Shinnecock and non-Shinnecock, to participate in various arts programming.

Toni Ross, co-founder of the mainstay restaurant Nick and Toni’s in East Hampton and artist in her own right, never questioned that she would donate to make Ma’s House possible. She and Dennis had exhibited together in the past and she came to know and appreciate his work. “I find his work to be both very challenging and accessible,” Ross said. “So I wanted to support that. But moreover, I loved the idea of helping address some of the barriers that exist between the Shinnecock nation and those of us out East who are not part of the tribe.”

The campaign raised more than $40,000 for the materials needed to put the house back together while Dennis and his father provided the labor necessary for the renovation. They cleared out white mold, laid down concrete, and erected floors and walls while filing the paperwork for Ma’s House non-profit status. 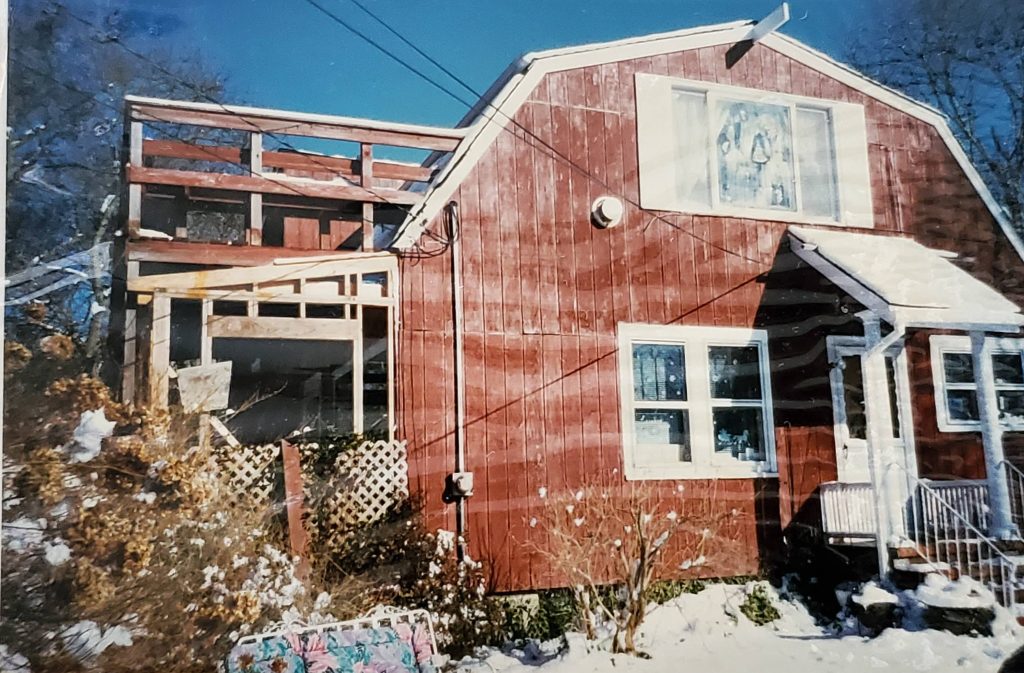 Ma’s House and BIPOC Art Studio before the renovation.

After more than a year of hard work, the house is now whole in a way it hadn’t been for decades. A garden in the back is full of plants donated by friends. A beehive gifted by Pink Floyd bassist Roger Waters and his partner drones quietly nearby. Various other donations populate the house and grounds, including a wide filing cabinet from the local East Hampton Star newspaper that Dennis uses to store his work. “Now I can actually show people stuff, even sell it,” he said. “Before I had to keep it all in boxes.”

After Dennis started working and living out of Ma’s House, he opened it to other residents. Yanyan Huang, a multimedia artist, visited for two weeks and produced work inspired by origin myths of the Shinnecock tribe. At the end of her tenure, she showed it in an exhibition there titled “Time Cloud.” Allie Mitchell, a screenwriter, actress, and filmmaker who recently moved to Long Island, just finished a week-long residency during which she spent time finishing up TV pilot scripts she had been developing.

Dennis said that while he values residencies without too many strings attached, he thought that since the artists benefitted from staying on the reservation they should find a way to give back to the community. Huang hosted open studios once a week and various other programs. Mitchell staged a reading of an episode from one of her scripts that proved heartening.

“Everyone has been really welcoming and kind as well as generous with their time,” Mitchell said. “There’s a strong sense of community on the reservation and I think people are excited and supportive of what Jeremy is doing to bring more art to the reservation.”

Offerings from the residents are just one part of how Ma’s House is being used to foster opportunities for art making and education on the reservation. In collaboration with Guild Hall in East Hampton, Dennis set up programming where Black and Indigenous educators and artists gave talks over the summer in a series called “Gather.” More events like talks and artist dinners are being planned for the fall.

Thinking back to an earlier time when Ma’s House played home to powwows, Dennis said he was happy to see the community once again congregating in the backyard. “With our first resident, we had that happen again—Shinnecock and non-Shinnecock people coming, bringing different communities together,” he said. “All around us is art and storytelling and performance. I think that’s amazing.”

Jeremy Dennis, a photographer, educator, and tribal member of the Shinnecock Indian Nation, spent the past year and a half renovating the home where he grew up on Long Island’s East End. During the first wave of the pandemic, Dennis had been living with his parents, after his plans to attend artists’ residencies had been […]