“AQUI ESTAMOS (HERE WE ARE)” by Leiko Ikemura in Valencia, Spain 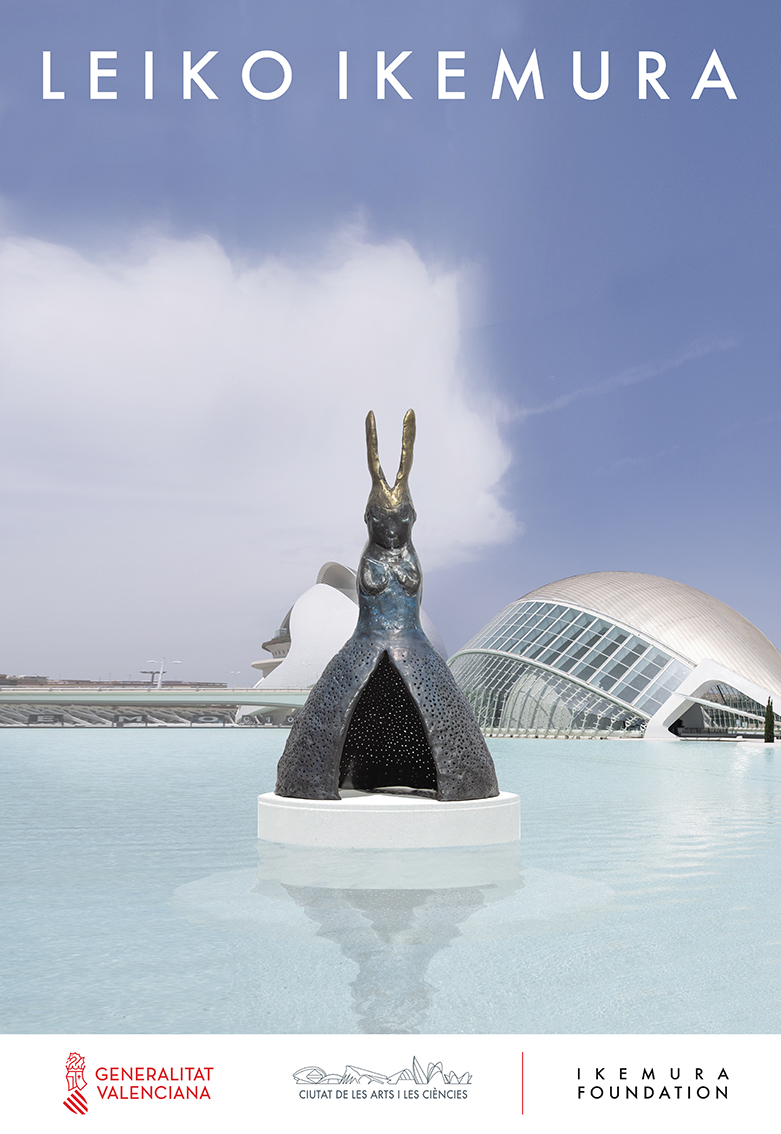 Planned via a collaboration among the Ciutat de les Arts i les Ciències (The City of Arts and Sciences), the Generalitat de València (Government of Valencia) and the Ikemura Foundation, the project is a return to Spain for the internationally exhibited artist. After leaving Japan, Leiko Ikemura has lived in various places in Europe, including Seville, where she studied at the Real Academia de Bellas Artes de Santa Isabel de Hungría (Royal Academy of Fine Arts of Saint Isabel of Hungary). 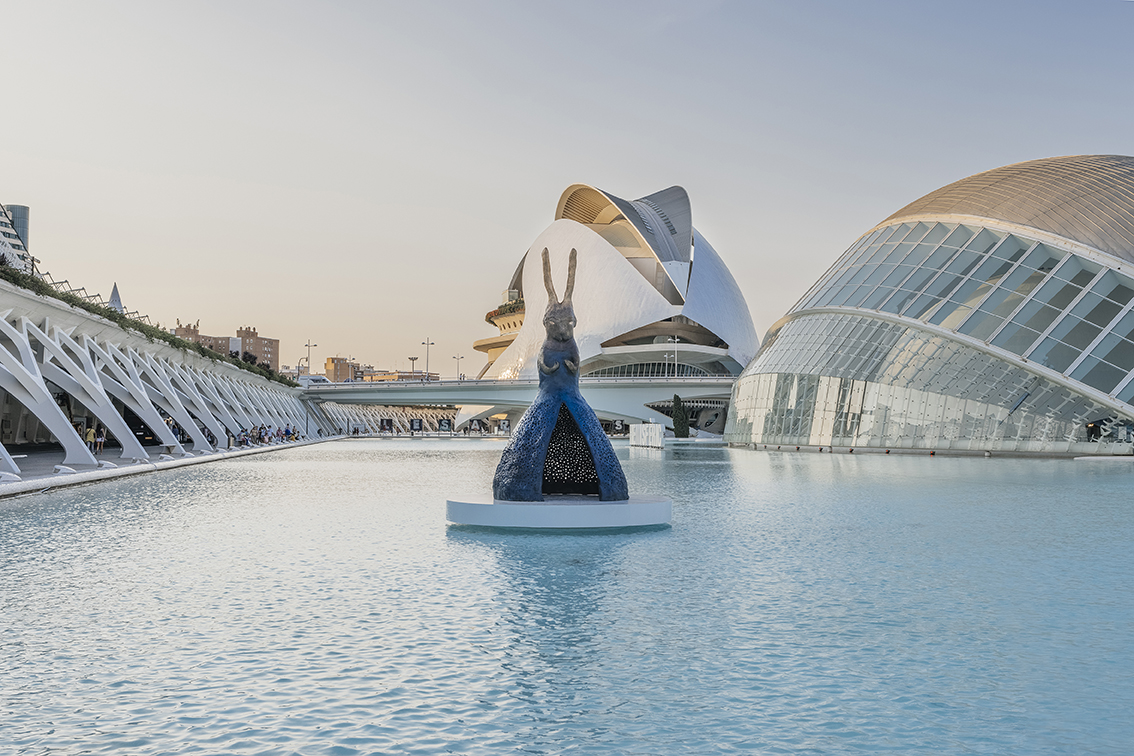 As the title of the exhibition AQUÍ ESTAMOS / (HERE WE ARE) asserts in its simplicity, Leiko Ikemura and her imaginary world have returned to Spain to present her renewed understanding of her own oeuvre.

Six giant public sculptures float above a blue pool of water in public space, an urban architectural landscape created by the architect Santiago Calatrava in front of the panorama of the eye-shaped l’Hemisfèric. Immanent and transcendent, the fantastical figures exude a sense of resilience. Their collective manifestation as bronze sculptures consolidates the artist’s ability to be meaningful and durable, to go beyond essence and travel through times. 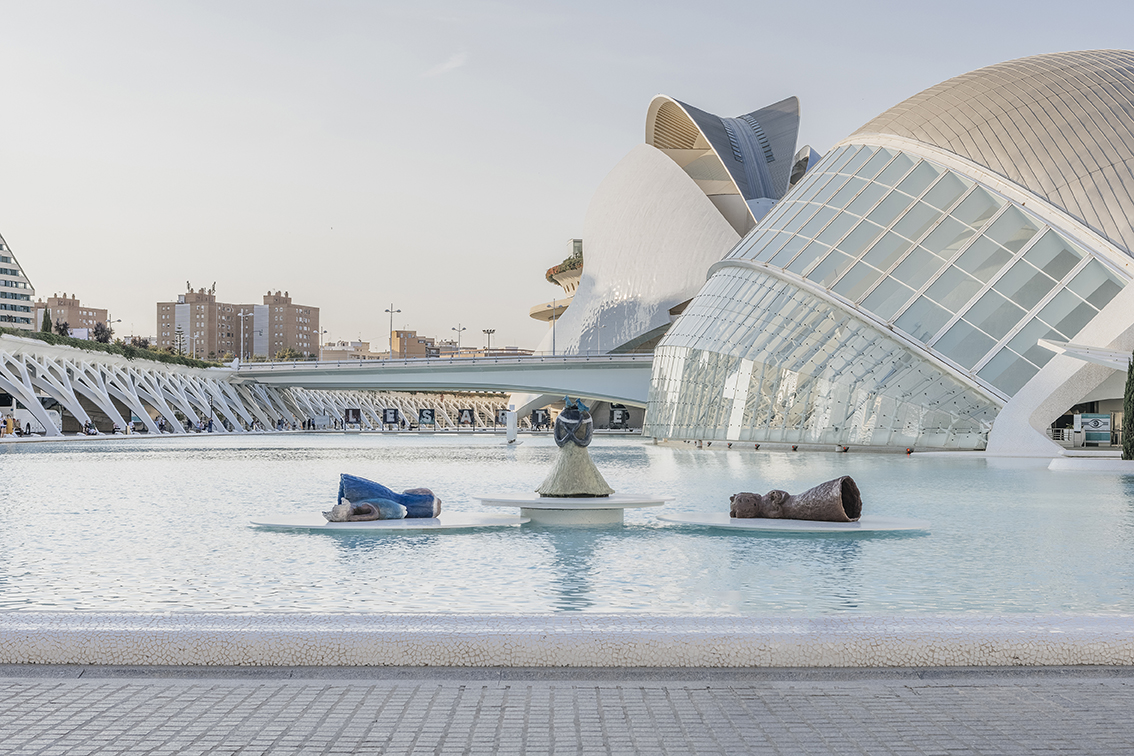 Among the six sculptures with subtly colored patina, four are in the reclining position, as if they are diving into the horizon of the pool. These four artworks —Double Figure, Cat Girl Lying, Lying Girl, and Catgirl with Usagi— each have the appearance of a girl, but also the shape of a flower:

In my work I foster the fusion of nature, with animals and plants as hybrid beings in space, in an eternal circle of life. — Leiko Ikemura 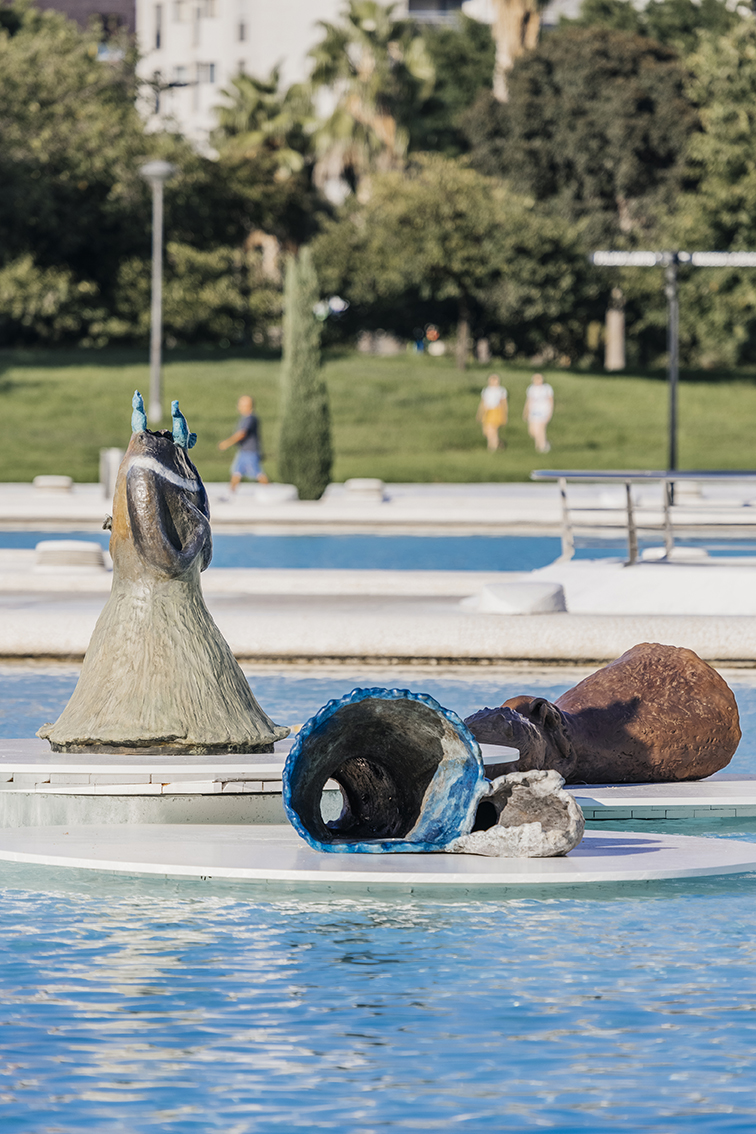 Rather than adopting the more commonly depicted posture of lying face up, the feminine figures face either downward or to the side. Simultaneously, when the hands are not covering the faces (removing the individual identity from each figure), they join firmly in front of the chest. Together, the reclining figures flesh out the numinous moment of quietness that arrives after the tide of trauma has somewhat receded, in a condition much like the pandemic-swept world in which we find ourselves. 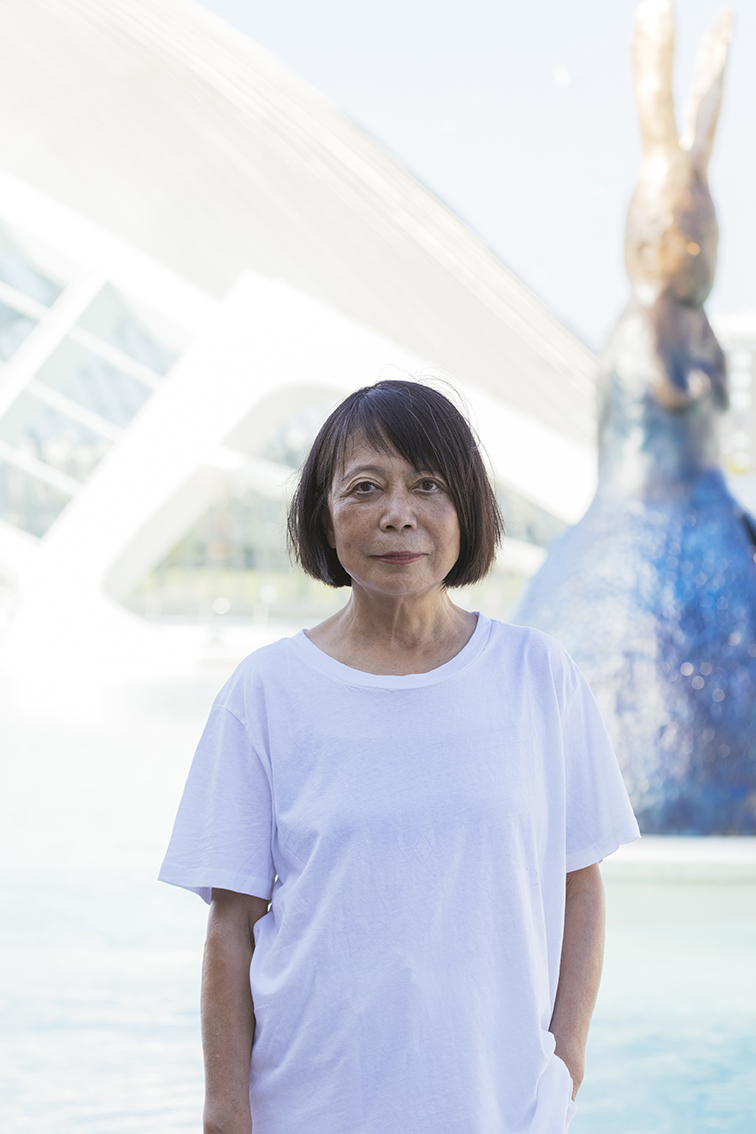 As the reclining figures could cast a grounding effect on the audience, the two standing sculptures, Usagi Greeting and Figure with Three Birds, through their tapering verticality that draws from the water, harbour vulnerability.

Usagi (兎), meaning “rabbit” or “hare” in Japanese, is a recurring motif in Leiko Ikemura’s work. Realized in a distinctively large scale (ca 4,5 x 2,5 x 2,5 m) for the first time, Usagi Greeting presents less clearly defined facial features yet specific physical proportions that give a more immediate sense of tenderness and youthfulness than the similarly sized series of works of Ikemura, Usagi Kannon. 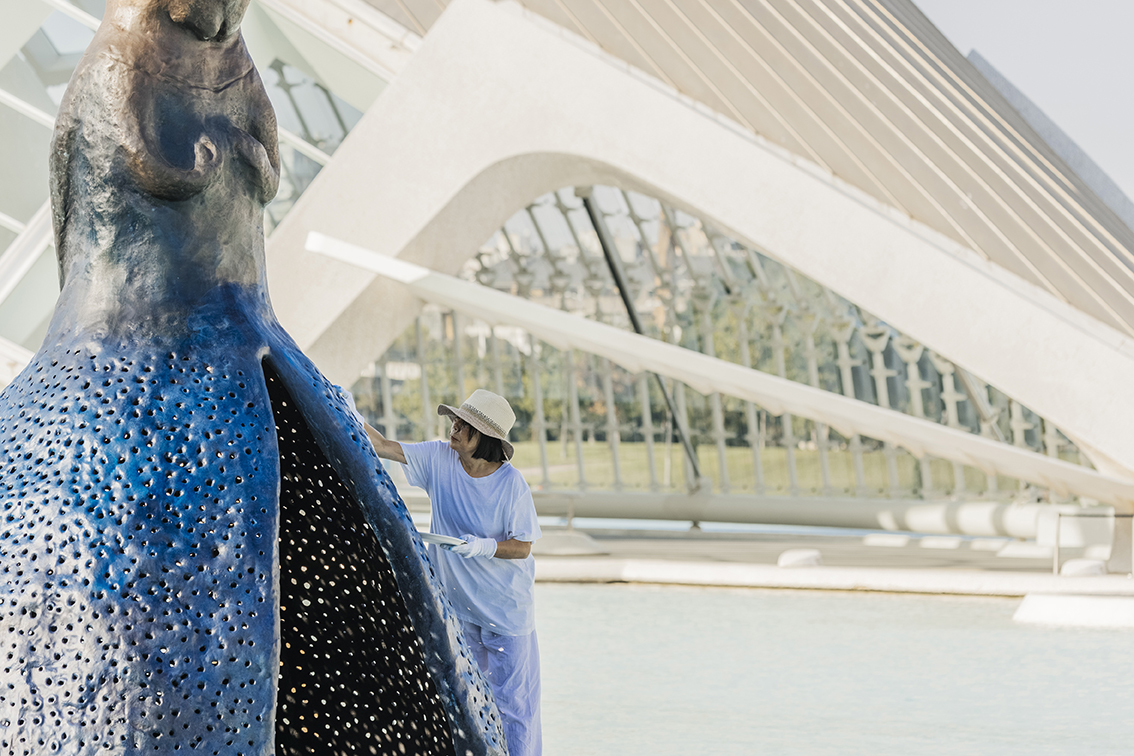 At first glimpse, Figure with Three Birds is a headless torso that does not shy away from the state of devastation, but offers visitors solace in its coexistence with the animated birds and the tersely incised face that emerges from the back. Here, life and death convene not only at the juxtaposition between the torso and birds but also through the cyclic process of hope and natural growth signified by usagi.

The importance of this group of sculptures that seems to float on water is amplified by the built context. The Ciutat de les Arts i les Ciències is an architectural complex of great cultural significance, appealing to its visitors with a sophisticated sense of ambition that is characteristic of Calatrava’s geometric and undulating designs. The oval-shaped sculpture platforms designed by Philipp von Matt bring such design ideals to the fore. They enable the emotive work of Leiko Ikemura to blend into the environment and accentuate the architecture of the waterscape, ultimately helping to achieve an unprecedented symbiosis of art and architecture:

It’s like water lilies on a pond the way Monet painted them, but with sculptures on the leaves. – reflects the architect Philipp von Matt. 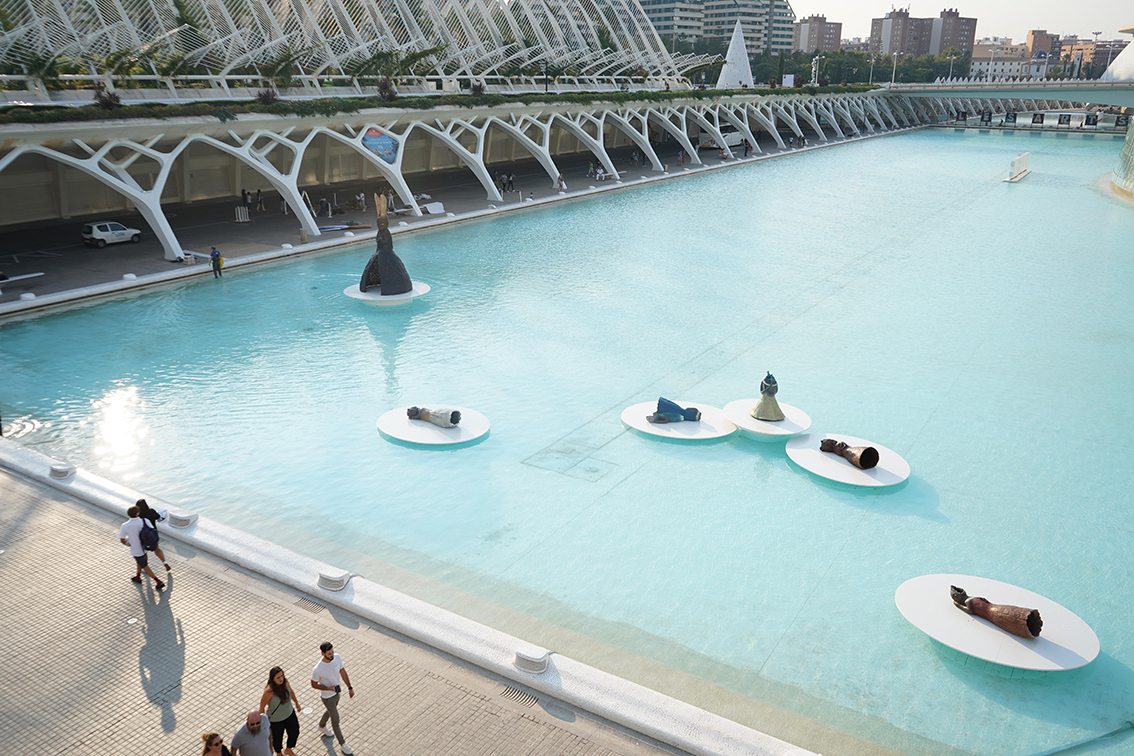 The exhibition AQUÍ ESTAMOS / (HERE WE ARE) by Leiko Ikemura invites the audience to embark upon a dreamy journey by composing a lyrical stanza within the framework of the structural epic of Calatrava’s magnificent architecture.

Leiko Ikemura (born in Tsu, Japan) is a Japanese-Swiss artist working in Berlin and Cologne. Ikemura studied at the Osaka University of Foreign Studies and the Escuela Superior de Bellas Artes in Seville. Featuring motifs such as animals, people, and horizons, Ikemura’s work delves into the genesis of worlds through a variety of mediums, including painting, drawing, photography, and sculpture. Her work bridges outer appearances of objects with subjects’ inner workings, referencing moments of literature as well as personal experience

“AQUI ESTAMOS (HERE WE ARE)” by Leiko Ikemura in Valencia, Spain 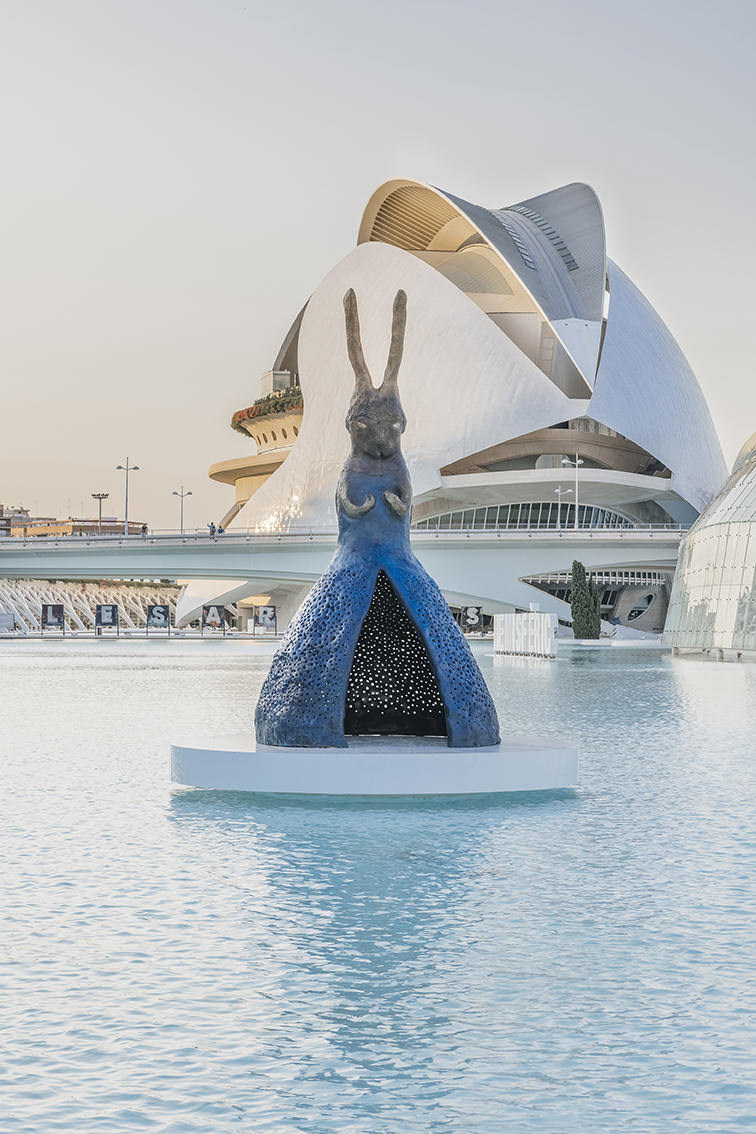 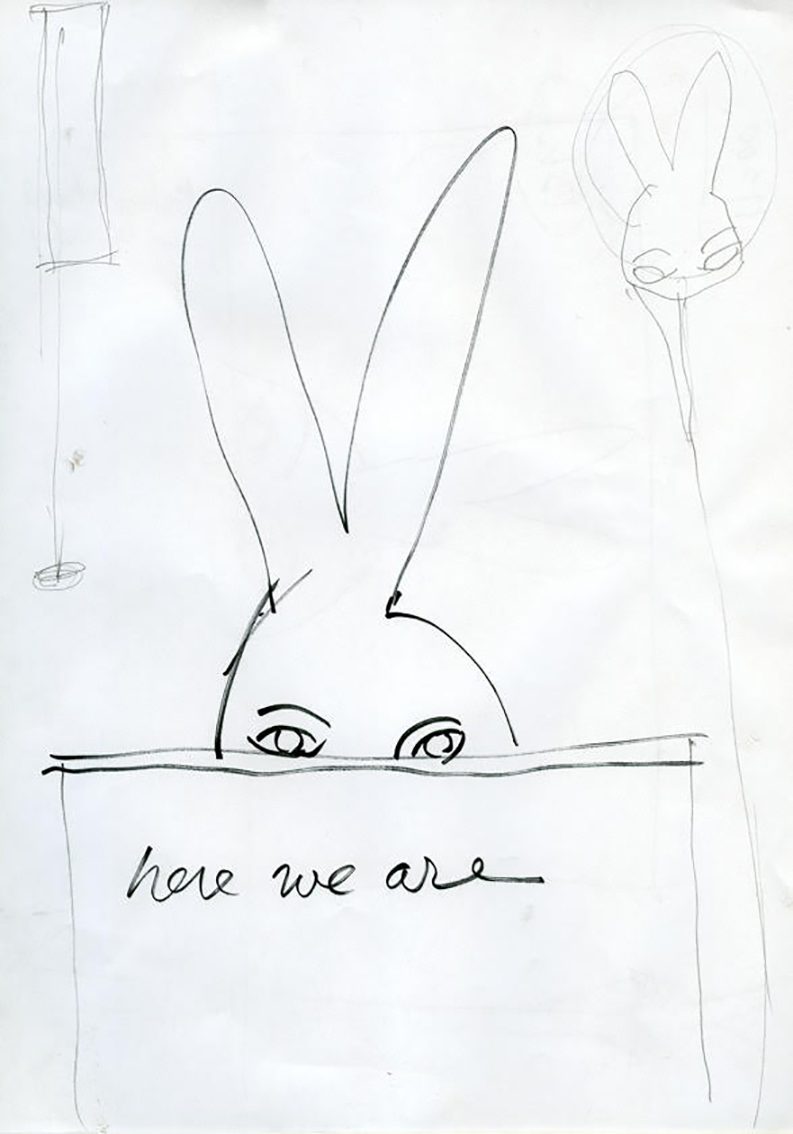 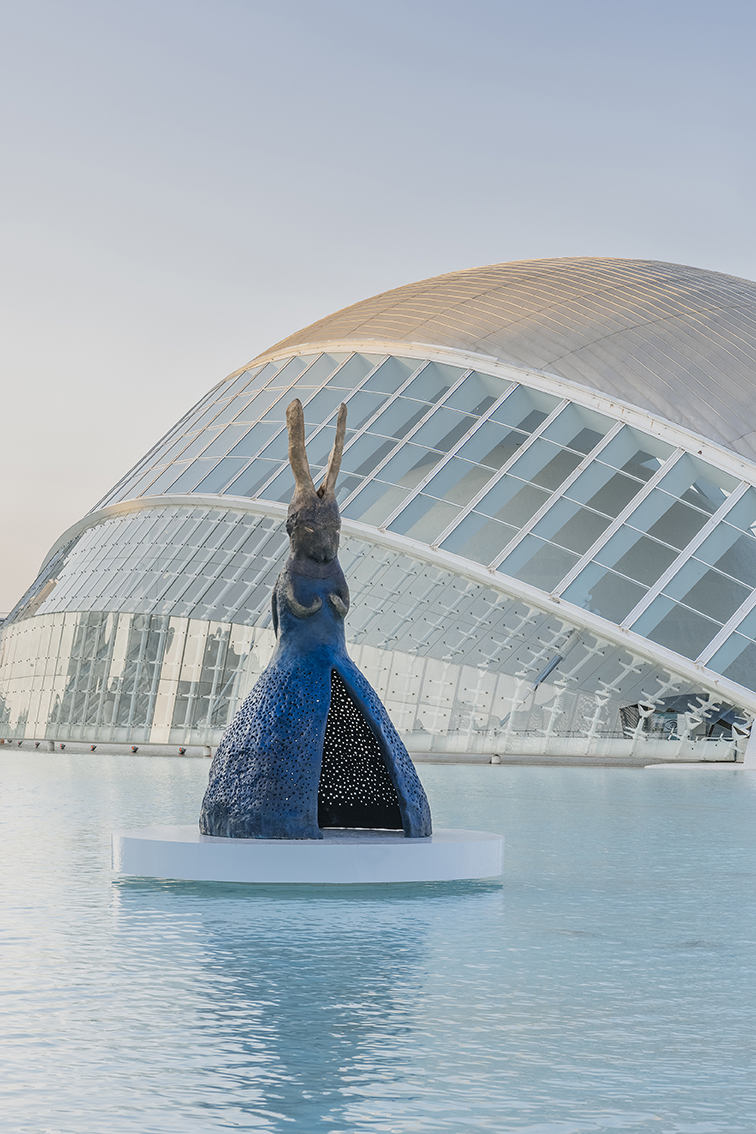 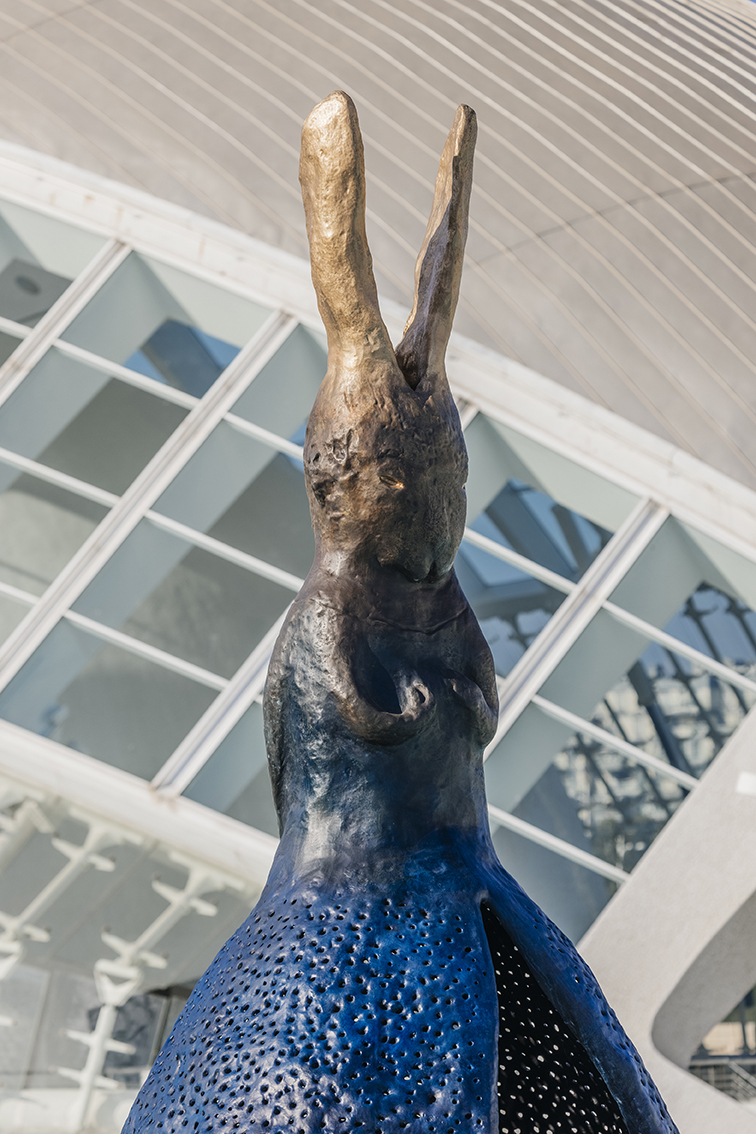 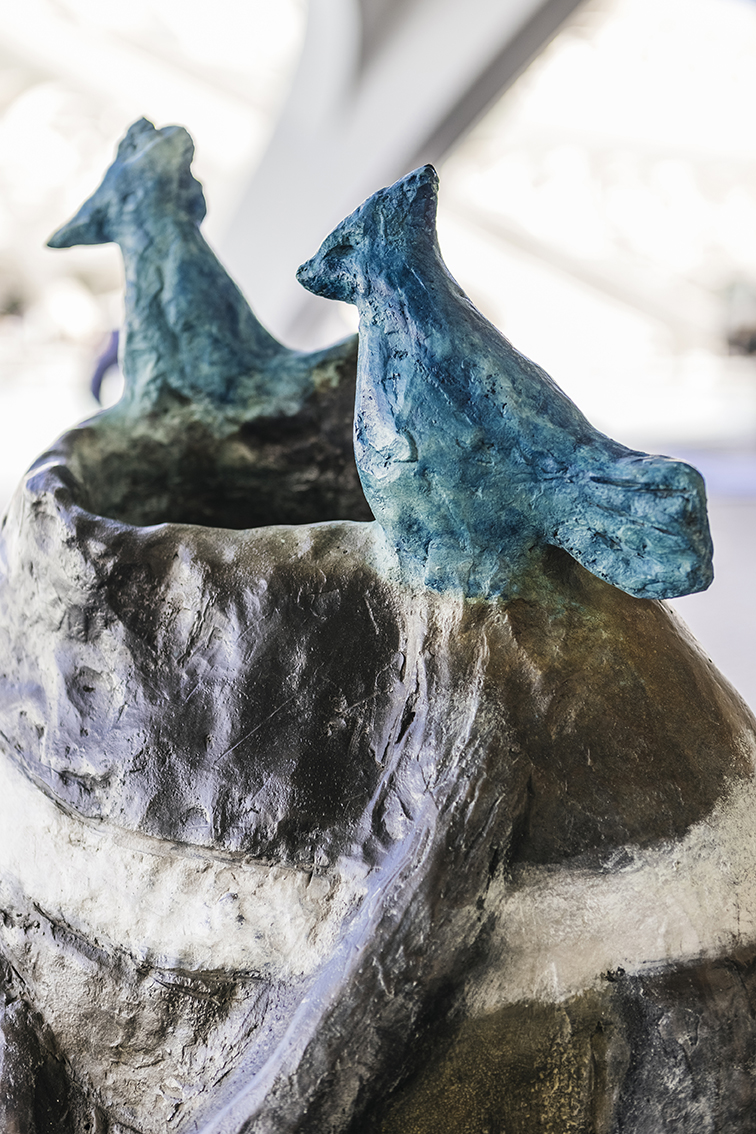 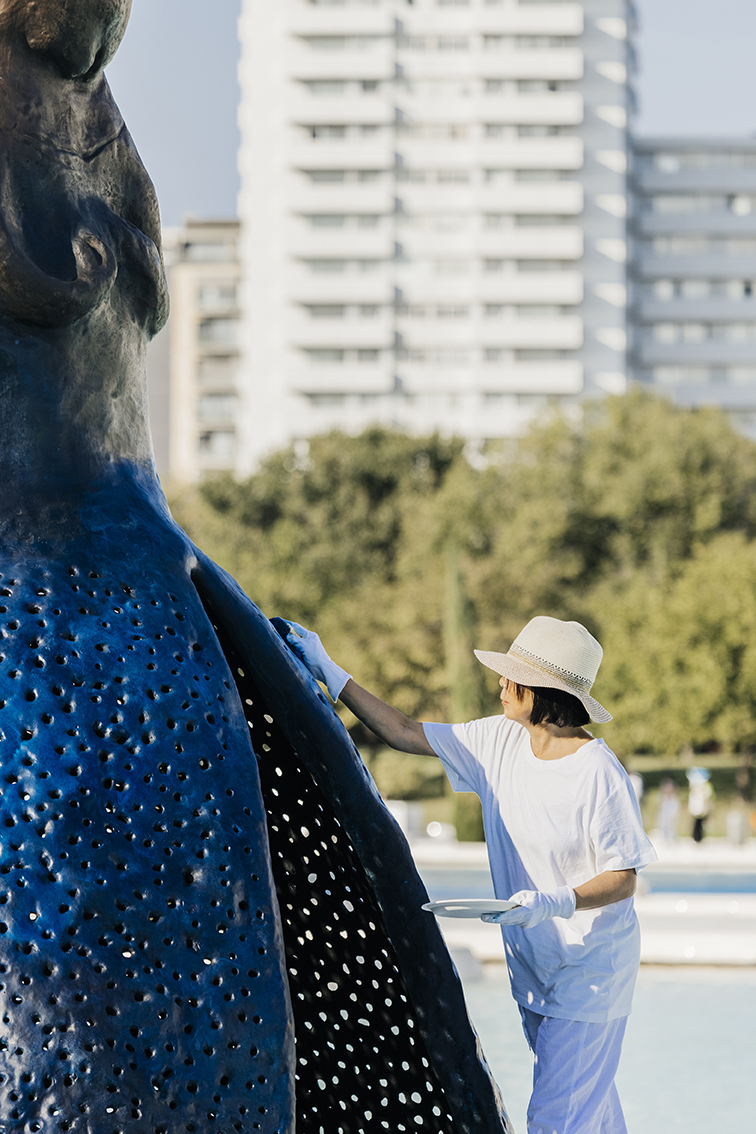