I’m currently sitting with Ad Deville from Skewville in Bushwick, Brooklyn in his backyard while he is setting up for the Bushwick Open Studios this Saturday. So firstly, what & where Skewville came from? Skewville started in Queens with me and my twin brother, Droo. The word Skewville originated from the house we moved into… 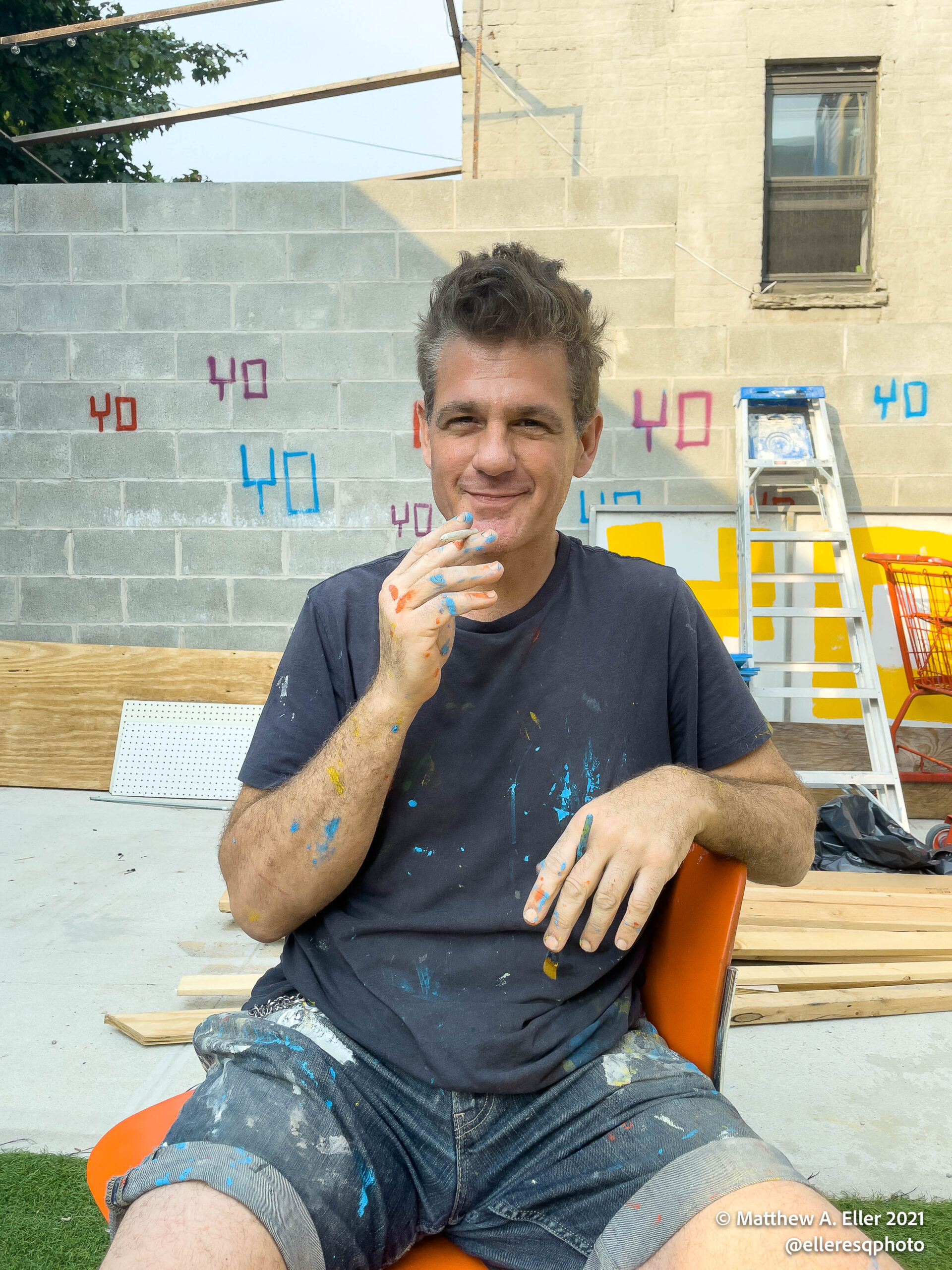 I’m currently sitting with Ad Deville from Skewville in Bushwick, Brooklyn in his backyard while he is setting up for the Bushwick Open Studios this Saturday. So firstly, what & where Skewville came from?

Skewville started in Queens with me and my twin brother, Droo. The word Skewville originated from the house we moved into that was totally dilapidated so we fuckin’ tricked the shit out of it with loads of retro furniture and that became like the honeycomb hideout for us and our friends. People would go into Skewville and make art and people were smoking tons of weed in Skewville. So that’s where and what we started our own bong company later that same year. Well, actually we kinda started it because I got fired from my day job as well… 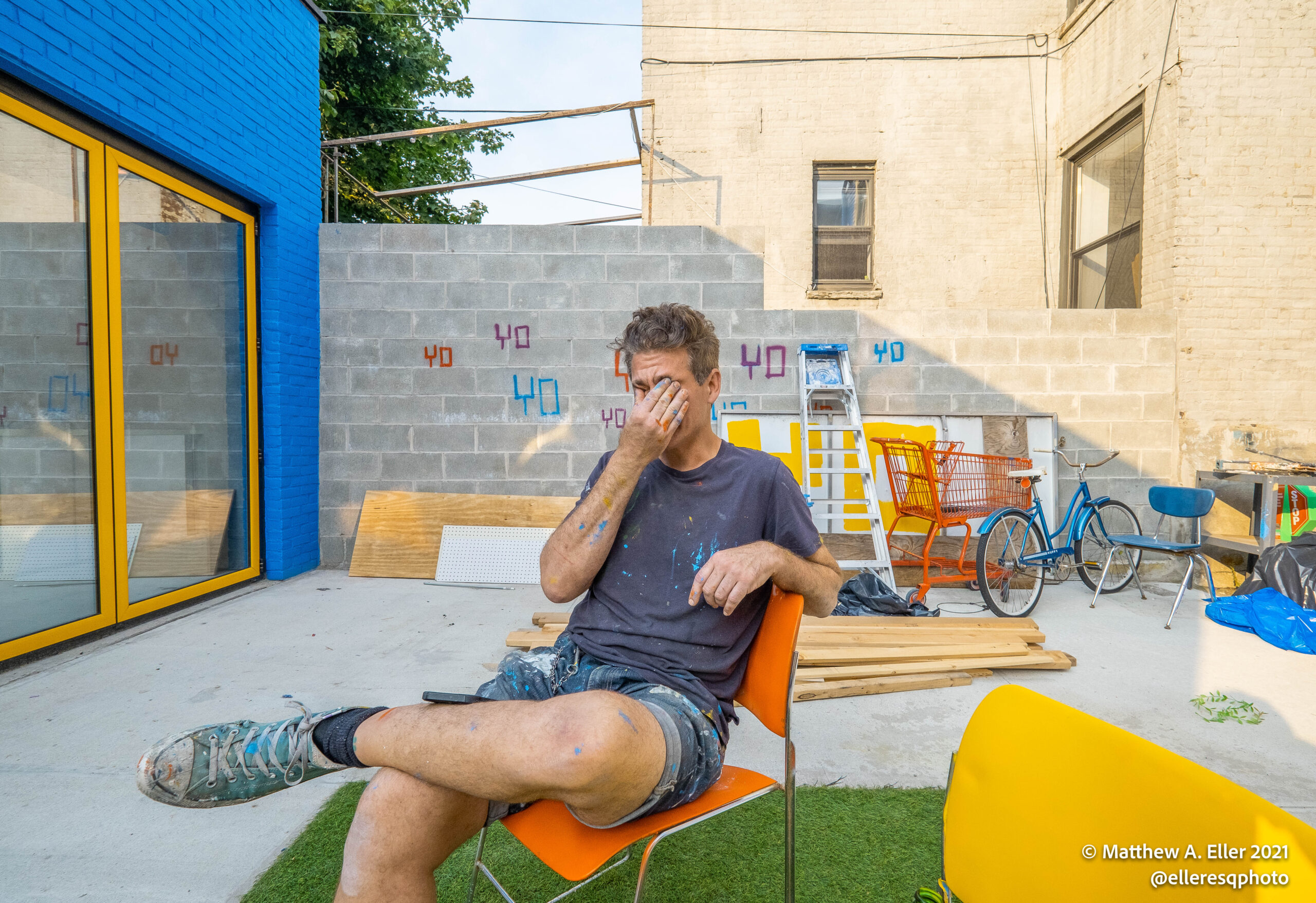 What type of job/industry?

An advertising gig at one of the best agencies in NYC who totally suck ass by the way. And actually, because of that I collected unemployment which financed the first Skewville Smokables collection. Coincidently this weekend we will be celebrating its 25th anniversary at our Bushwick Open studios event. But anyway, so for 15 or 16 years we were killing it in the paraphernalia market, but after 9/11 the Government busted the whole bong industry. So, I slowly switched over to art and I opened Orchard Street Art Gallery & Factory Fresh. And then throughout the years Skewville just kind of developed, just kind of pushed more and more into the art scene and thats when the “Sneaker Mission” was created in 1999.

So this is when you started to get more serious about street art stuff? Tell me more about the “Sneaker Mission”.

Well, we silk screen on planks of wood, double sided, hand cut, then drill holes and lace them together.  So essentially they are a pair of wood sneakers we toss over power lines. We have thrown over 5,000 pairs of fake wooden sneakers worldwide… South Africa, all over Europe, across the entire U.S.A… 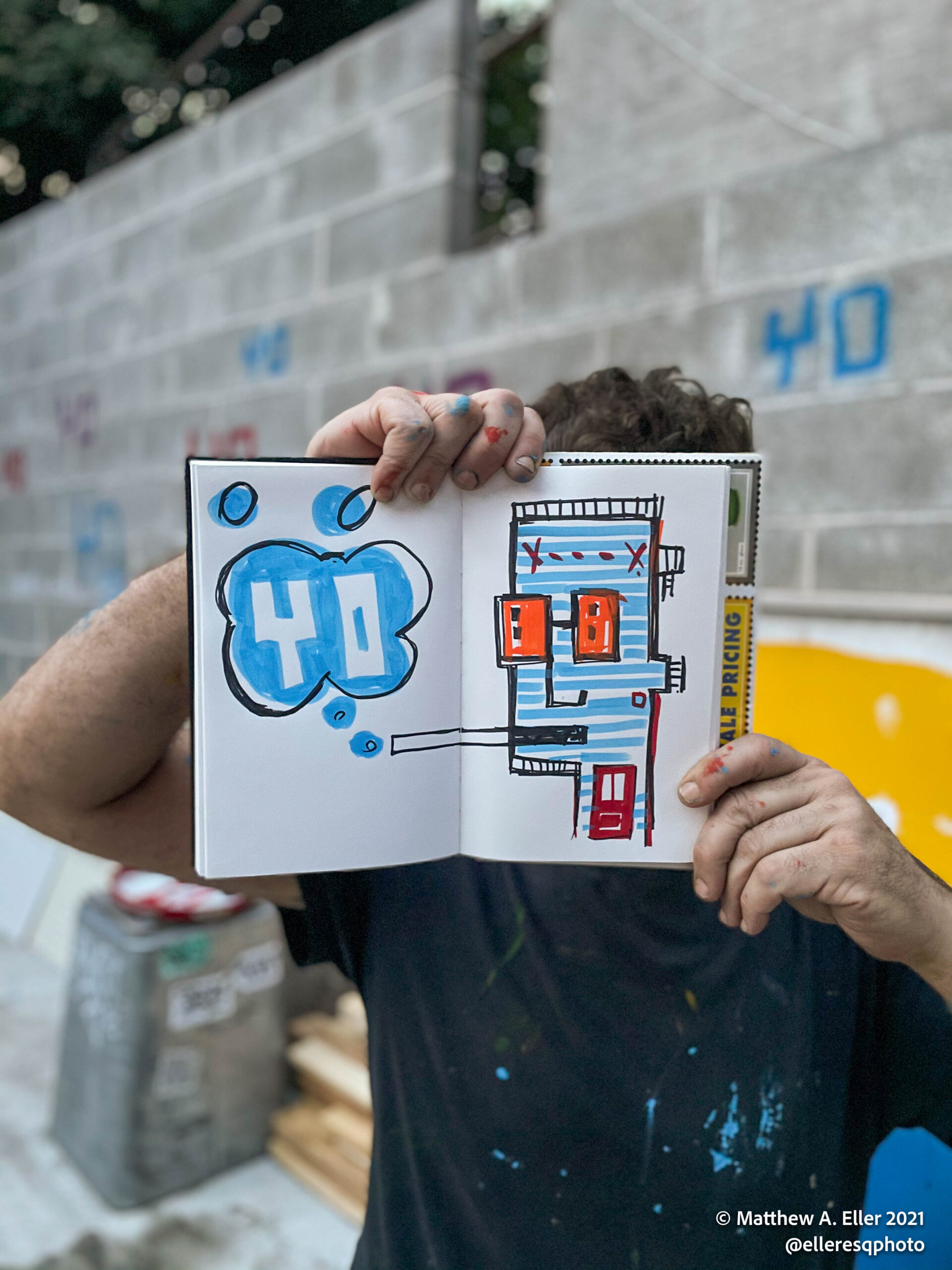 Doesn’t sound like the worst job in the world…

Ya! Exactly! The sneaker project experiment was just kind of the birth of Skewville as street artists. Like we thought street art was completely played out in 1999 because everyone was doing posters and stickers and all the same shit. So it was kind of like what’s something new? Like what’s a new media? And that’s kind of what we saw the “Sneaker Mission” as, but I need to give that credit to Droo, because we were thinking about what could we put up on telephone lines and sneakers were his idea.  We were originally going to fly kites into them that said “The Sky is Falling”. But that seemed it would be too expensive.  But i was in the room when he said it so that counts as our Idea!

Good thing you figured that out out early… how much would 5000 kites cost??

Right! Who knows but a small fortune most likely! But most of all it really got us back into street art. Particularly I think it was 2002, I moved into the city (Manhattan) with my girlfriend at the time Puffarella. And I said, the only way I’m moving into this city is if I could live in a store front, cause I seen a few artists do it. So we got a second floor apartment and ground floor storefront on Orchard Street in 2002 and started Orchard Street Art Gallery. But my inspiration for opening the gallery came that prior year I went to CBGB gallery and try to get a piece of mine into an art show there and got rejected. And I just remembered there is actually a great Ron English story in here… I told you about that right?? 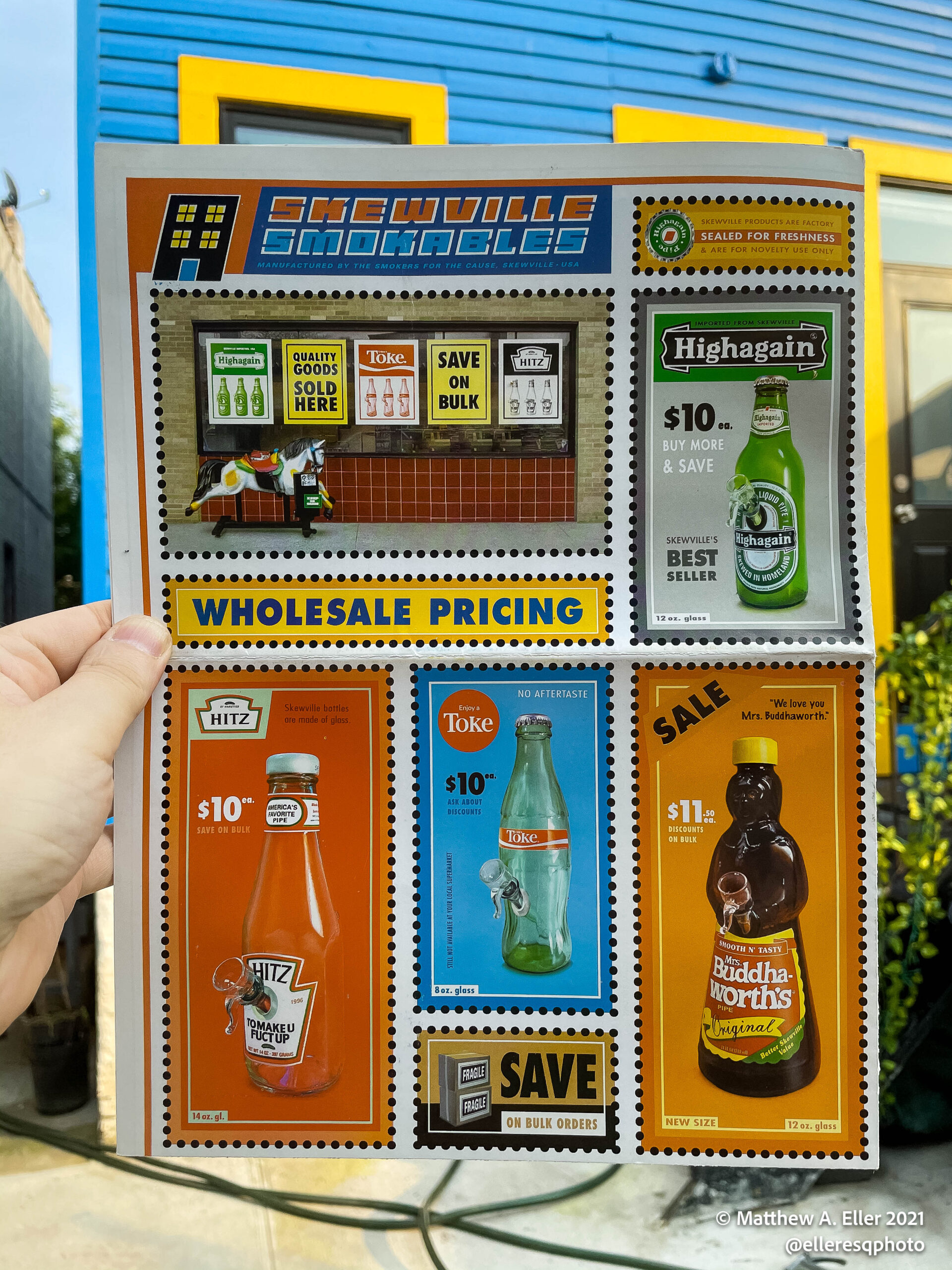 I’m not sure. But Ron has that show Saturday at Allouche Gallery actually…

Oh sweet! So, CBGB Gallery was like, “oh, we’re doing this group show”… ‘Cause I brought them a Skewville bong as a kind of audition… Crazy enough this was even before we mass produced paraphernalia. Every piece was one of a kind hand made at this point.  This was like 1997. Anyway, we went to CBGB gallery because I was also making poster art parody stuff at this point. So, we went to CBGB gallery and she was like, “Oh, this is really cool. There’s this guy doing this group show. I’ll give you his number”. His name was Ronald English. And I’m like “No way!!”.  So I wrote him a letter. I sent it upstate with one of our parody catalogs and photos of our “Toke and Highagain” Coke and Heineken parody, and works like that. And I had his phone number. So I called him a week or two later. He was just like, “who is this?” And I’m like, “this is Adam from Skewville. I just sent you a catalog”.  And he’s like, “I didn’t get it”.  And then I never heard from him again. Until a bunch of years later in Dresden Germany with Carla McCormick, who curated some happy street art thing. And I was sitting at a table suddenly with Ron English. So I brought up the story about him not receiving the newspaper flyer we designed and Ron was like, “yeah, I did get the catalog actually”. I was like, “what motherfucker!”  You’re doing weed and smokable parodies now just like on our flyer! But honestly I wouldn’t have it any other way because it made for the best story ever. Maybe Skewville will make a smokable with Ron one day. We would be honored to work with Ron. It would be a great finally to the trilogy!

The craziest part is that we didn’t take it into the art scene initially. We took our parodies into the commercial scene and made a killing until the government busted it years later after 9/11. So the irony now is that it’s back in style and we are breaking out the old archives for the Bushwick Open Studios event this Saturday. It’s going to be like a mini retrospective. We emptied out our storage unit, so there’s going to be loads of stuff both artwork and smokable like this bong that’s available for purchase, and sneakers of course, all while simultaneously showcase the new space. 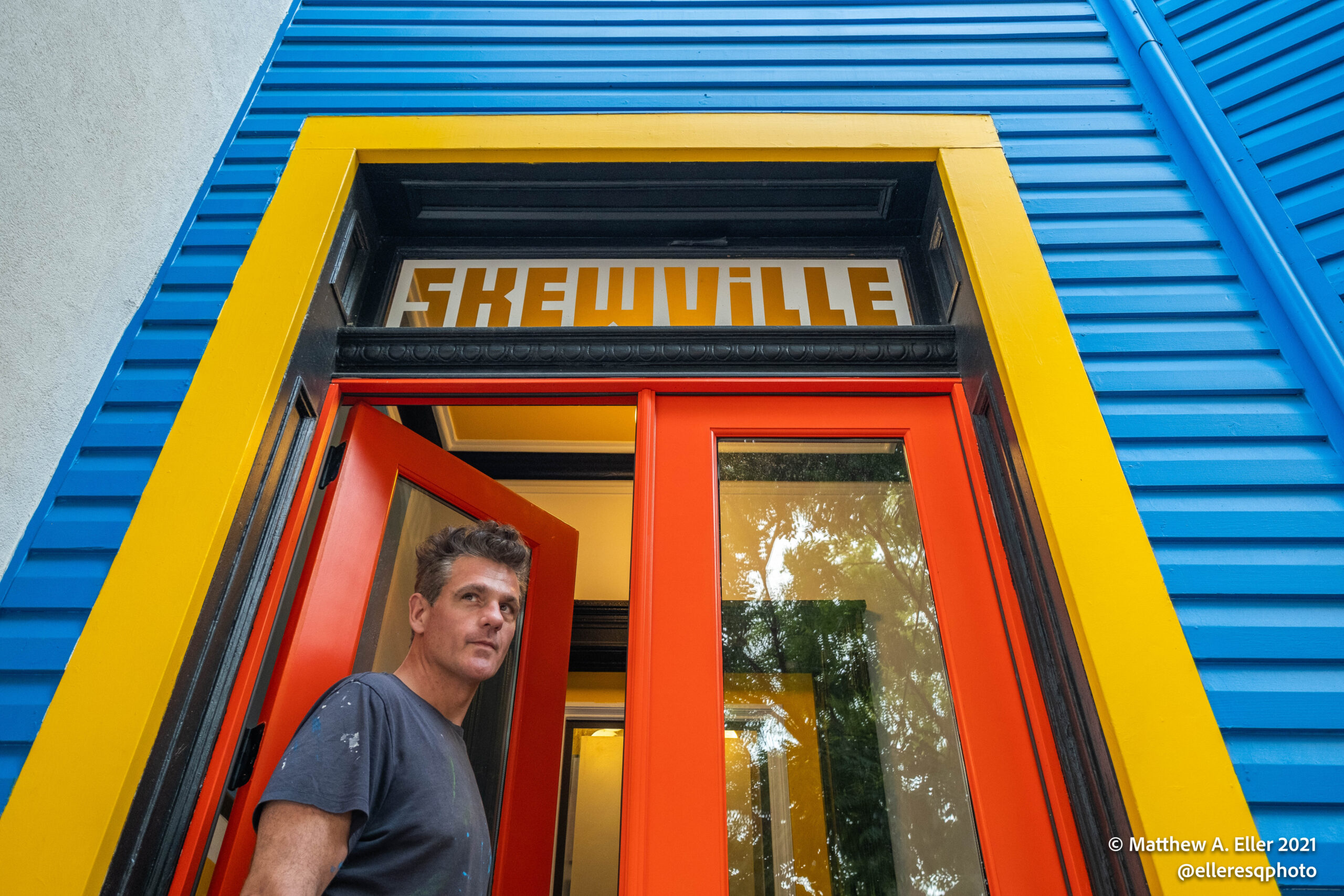 Oh amazing! And I heard there is an after party?

Well then they would miss out on touring your amazing Skewville custom row house which is just down the block from The Bushwick Collective in the heart of Bushwick, Brooklyn. Can you explain this surreal place? 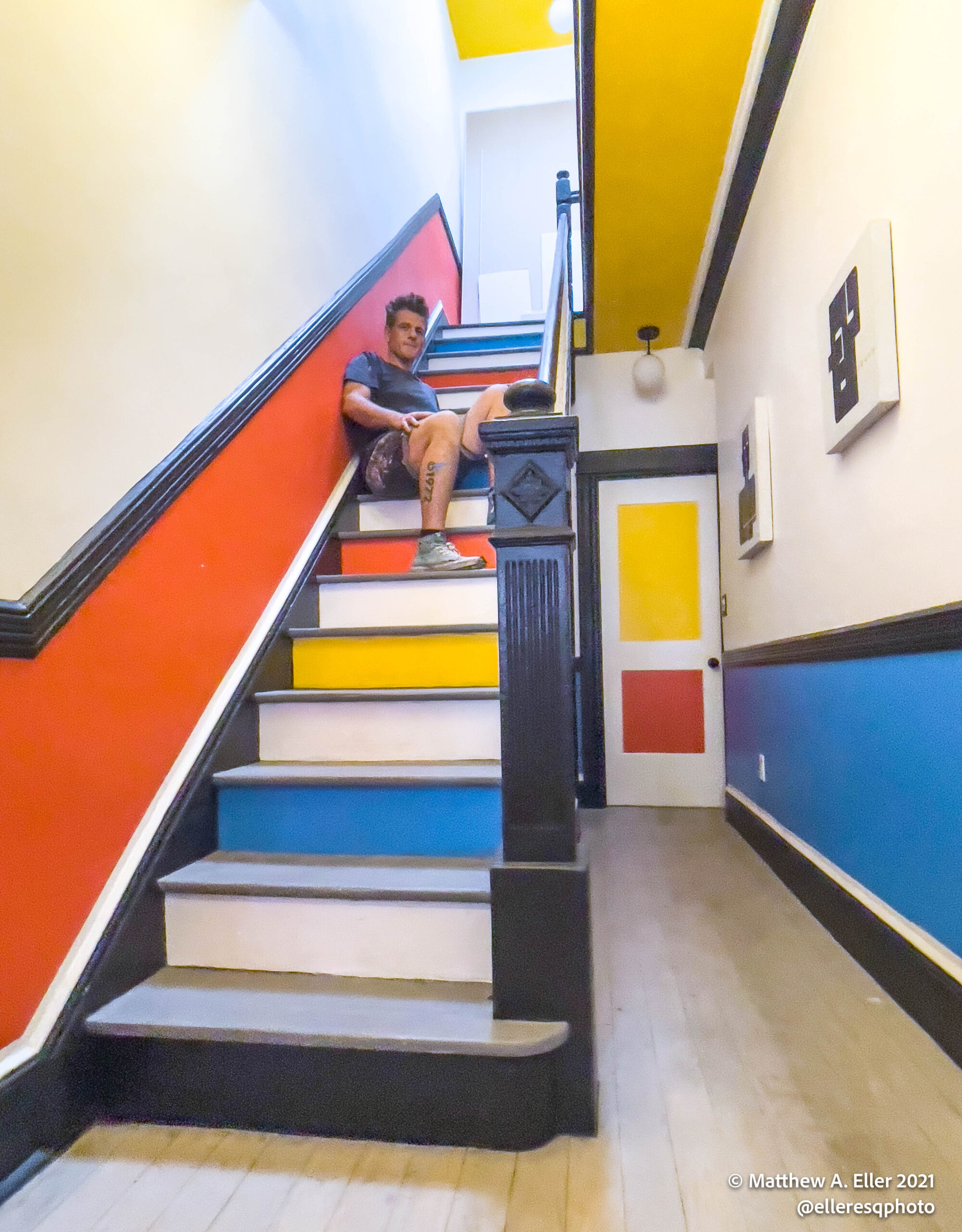 Well it’s a row house with a horse stable in the back we converted into our art studio. The entire house inside and out, top to bottom, have been customized by us in our trademark Skewville color palette and style. For Saturdays event we will be opening up the entire basement, and both floors of the building will be open so you can see the totally gangster staircase which is usually not available to the public.

I mean honestly it’s worth the ride just to see this house. It’s a total trip. But I know you have to get back to setting up for Saturday so any last crazy or funny stories while tossing wood sneakers over stuff all over the world?

Well I’ve been caught a few times by police while throwing up the sneakers and they’re just kinda like, don’t know what to do. They usually just ask why we are doing it and I usually tell them that I can cut them down if it’s a problem, but they have never asked me to. 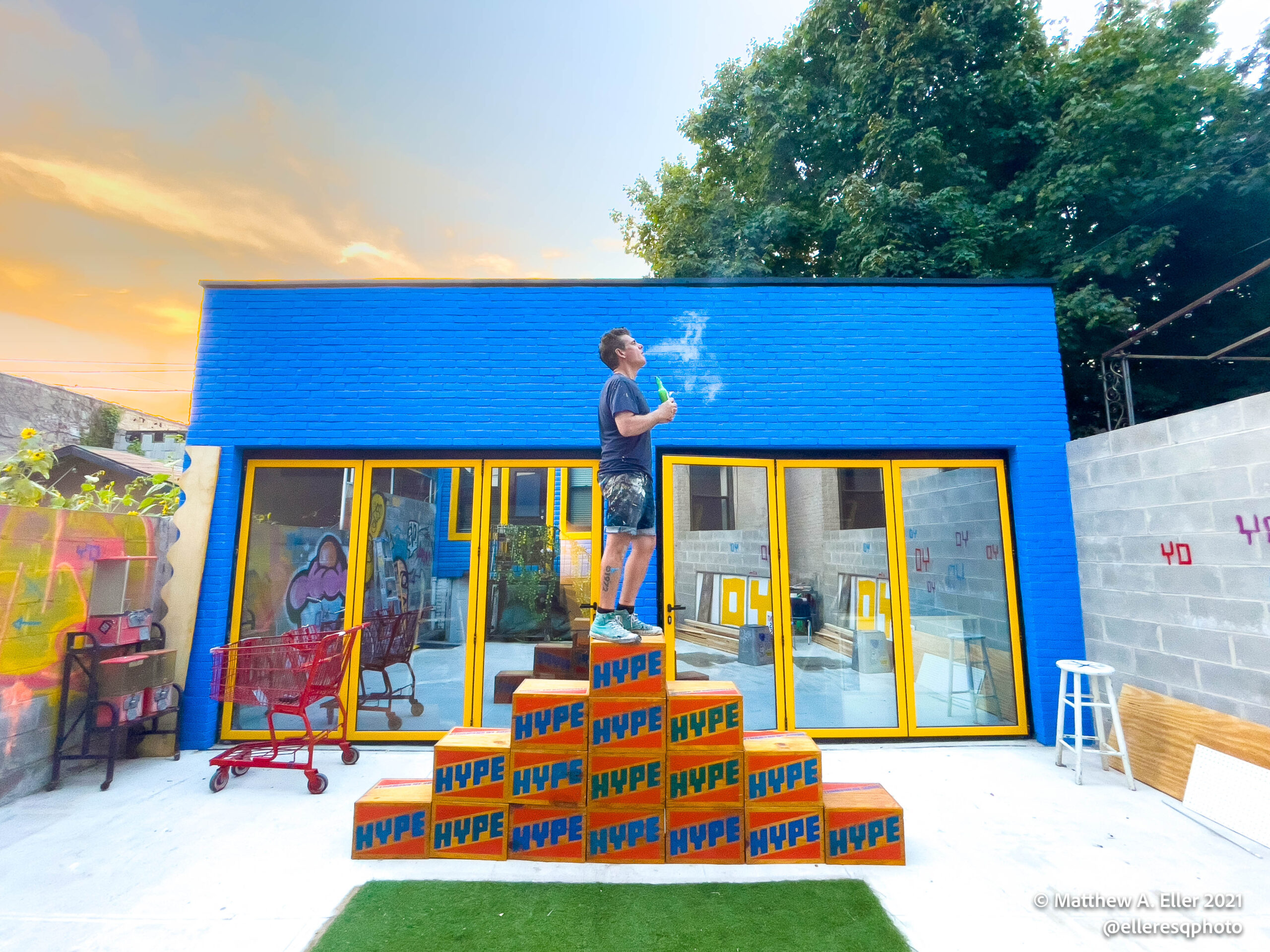 Well at least you have not gotten in any real trouble yet.  Any last words?

We’ve always kept shit in house, you know, literally we can do that now. Mostly because dealing with galleries in our experience is crap, so our goal is just to kind of not be a shameless evil brand but still a brand which Skewville basically was originally. We will be making pillowcases, bedspreads and shameless stuff like that, but they’ll be smokable as well of course! We want to have artists come paint all these walls around us and have a place to chill and make art. So stop by Saturday and say hello and check out the new Skewville art compound. 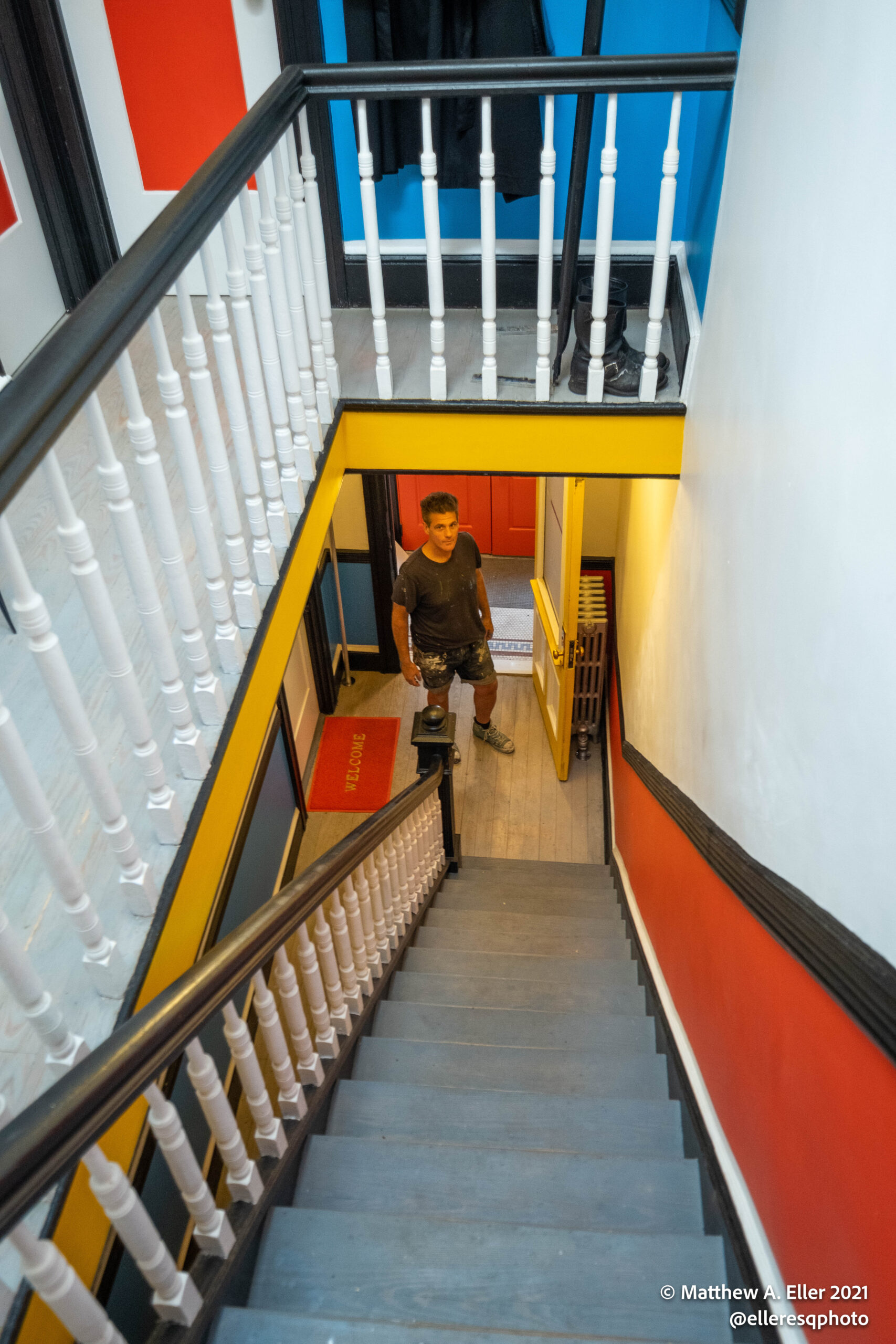 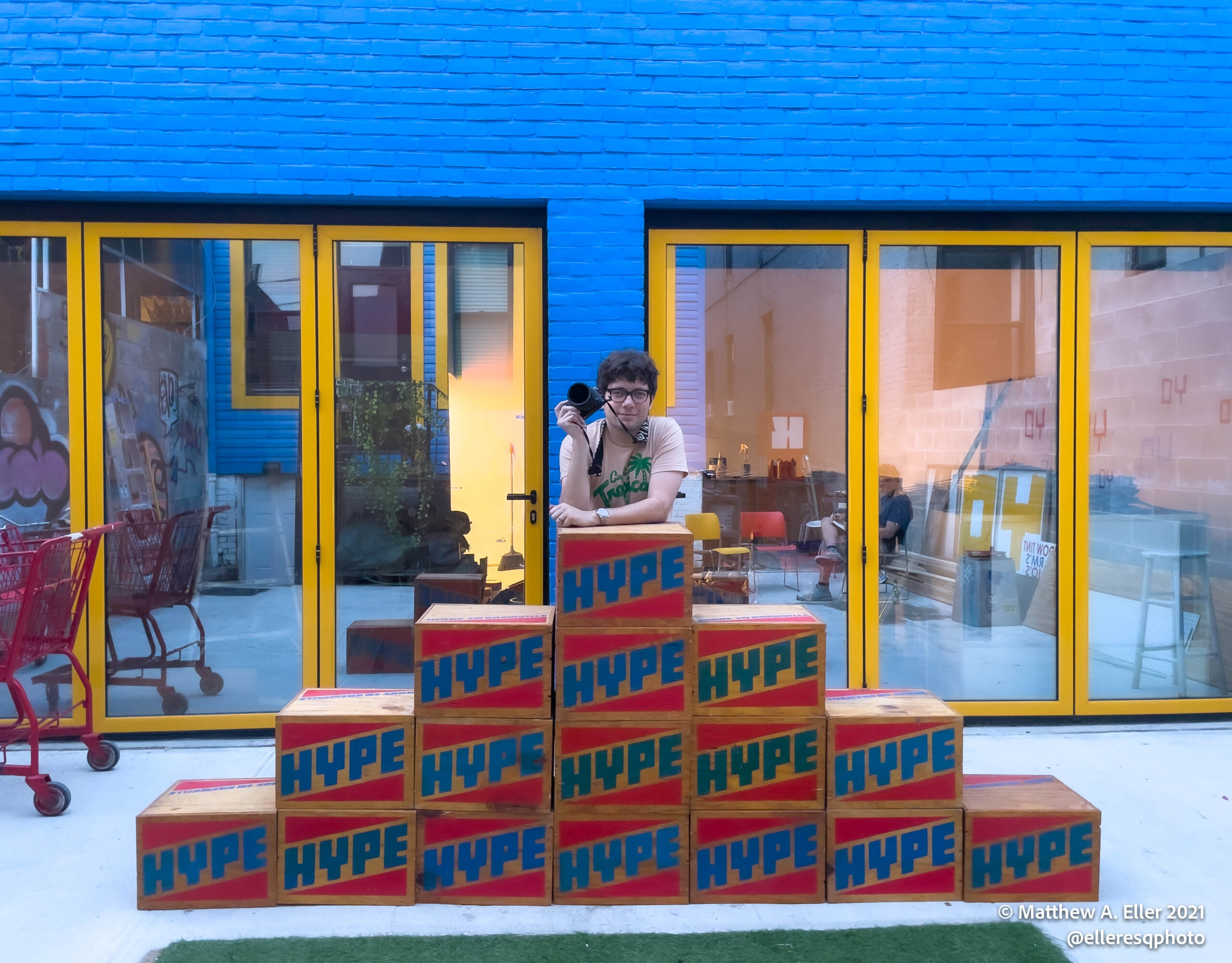