Atta Kwami, a Ghanaian painter whose abstractions elegantly established a continuum between Africa’s past and present, has died at 65. The Serpentine Galleries in London, which is set to stage an exhibition of Kwami’s work in 2022, announced his passing on Tuesday.

Kwami’s paintings often resemble colorful arrays of geometric forms that are organized in ways that recall grids. But unlike the neat arrangements seen in works by Piet Mondrian and Agnes Martin, Kwami’s compositions are freer and livelier, and are often filled with shapes of uneven sizes, rows of varying widths, and dramatic contrasts between hues. In that way, they are closer to the abstractions of Stanley Whitney, whose work, like Kwami’s, often melds Western modernism with styles associated with jazz and crafts.

In a 2017 New York Times review of Kwami’s exhibition at Howard Scott Gallery in New York, critic Roberta Smith wrote that the artist had “one of the most flexible abstract vocabularies of any painter today.”

As he was working, Kwami often had in mind the traditions of the Ewe and Ashanti peoples, two groups with significant populations in Ghana. Born in 1956 in Accra, Kwami was based in Kumasi, Ghana, and Loughborough, England. In his art, he often alluded to the cross-pollination of European and African aesthetics that he witnessed throughout his career. Among his Ghanaian sources were Ewe kente cloth and the sounds of the folk musician Koo Nimo. 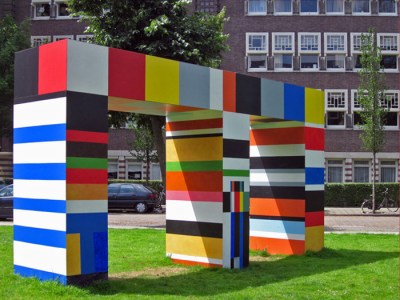 Periodically, Kwami also worked as a curator and an art historian. In 2013, he published the book Kumasi Realism 1951–2007: An African Modernism, which explored the growth of an art scene in the city he long called home. The book postulated a style that Kwami termed “Kumasi Realism,” or a Ghanaian kind of painting that emphasized multiplicity, and considered the role that the city’s art spaces played in fostering a local kind of modernism.

At the time of his death, Kwami was on the rise in Europe. He won the 2021 Maria Lassnig Prize, a $57,000 art award that comes with an exhibition at the Serpentine Galleries, and his sculptures can currently be seen at the Folkestone Triennial in the U.K. In the forthcoming Phaidon book African Artists From 1882 to Now, Kwami’s work is included alongside that of more well-known artists like Meschac Gaba, Wangechi Mutu, and Yinka Shonibare.

When Kwami was announced the winner of the 2021 Maria Lassnig Prize last year, Hans Ulrich Obrist, artistic director of the Serpentine Galleries, called him “an artist with decades of pioneering work.”

Kwami often spoke about how his work likened abstraction to poetry. “The qualities I seek in my work are: clarity, simplicity, intensity, subtlety, architectonic structure, musicality (rhythm and tone), wholeness and spontaneity,” he said in a 2012 artist statement.

He continued, “Poetry is able to sustain the life of language through new forms of usage. In painting it is also re-interpretation, improvisation and variation that affect innovation and development.”

The artist was the winner of this year’s $57,000 Maria Lassnig Prize.