In the theater of American violence, Cady Noland is a cruel and canny scenographer. Her sculptures, often assembled from mundane readymade objects such as handcuffs, tires, and metal railings, create an atmosphere of brutality. With “THE CLIP-ON METHOD” at Galerie Buchholz’s New York space, she has transformed the white cube into a kind of prison. Chain-link fencing along two walls blocks access to one of the gallery’s windows. Four groupings of plastic barricades used by the police for crowd control have been arranged around the room’s perimeter; some are truncated so their crossbars jut out. (Both sets of work, dated 2021, echo pieces she made in the 1990s with the same materials.) Three untitled silkscreens on metal panels from 1991/92 lean against the walls: these enlarged, annotated pages from Police Patrol: Tactics and Techniques (1971), a cop training manual, recommend dogs, horses, and helicopters as means of surveillance. Gray carpeting lends the space a banal corporate air. The spare installation feels like a premonition of authoritarianism.

This show was occasioned by the launch of a two-volume book of the same title that the artist edited and published with art historian Rhea Anastas. Its pages reproduce black-and-white images of Noland’s work from her nearly forty-year career; an index of the corresponding exhibitions appears at the back of the volumes. Several brief essays by Noland, most written in the late 1980s and 1990s, grapple with some of America’s most paranoiac obsessions, from serial killers to suicide cults. Across these pages, bloodlust seems as American as apple pie. But the book contributes to an overall sense of Noland’s visual language rather than providing an index of her specific cultural referents. The artist has eschewed a lengthy press release or gallery didactics, so the exhibition, unaddressed in the book, is left open to interpretation. 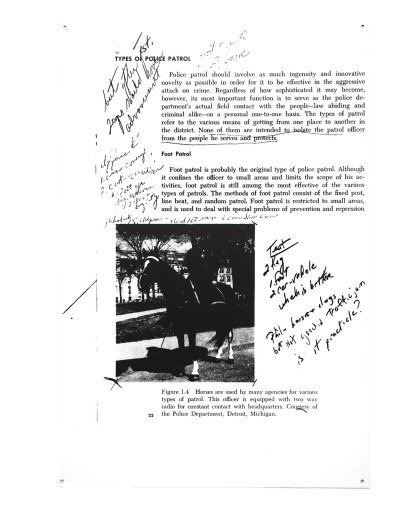 The fencing at Buchholz recalls the walls that Michael Asher removed from Claire Copley Gallery in Los Angeles in 1974, denuding the space of its authority by exposing its inner workings. Noland has reversed the gesture, reinforcing—rather than breaking down—the perimeter, perhaps pointing to a certain carceral logic of the white cube, with its endless reproducibility and its dependence on enclosure to produce meaning. Access in a gallery is implicitly limited and largely predetermined; chain-link and Plasticade barriers are designed to physically impede movement, and their presence in an Upper East Side gallery calls to mind the art world’s penchant for exclusivity. Yet Noland’s persistent refusal to explain herself also suggests a latent exclusivity aligned with the tendencies she seems to critique. The quieter dimension of her conceptual gestures—seemingly addressed less to the state than the art institution—is accessible only to those already in the know.

More than a century after Marcel Duchamp declared a urinal a work of art, Noland’s sculptures prompt us to question whether the readymade can be successfully deployed to political ends. Without added context, her coldly manufactured objects still gesture to their origins, making it difficult to parse how she intends to alter their meaning. This approach contrasts markedly with those of a younger generation of artists, such as Park McArthur, Cameron Rowland, and Constantina Zavitsanos, whose readymades are generally accompanied by lengthy explanatory texts relating them to contemporary issues. Does such didacticism make an artwork more accessible or simply overdetermined? How might it change art’s affective power?

That balance between openness and fixity isn’t quite resolved here. Then again, balance may not be Noland’s aim. The book, which is available for sale directly from the artist, can also be read in the gallery, while one sits on a black leather couch. Turn its colorless pages under searing fluorescents and the exhibition becomes an oppressive waiting room. Every road Noland has left open for us leads to more anxious deferral, as if to say: the worst is yet to come.

Deploying barricades and fencing as readymades, Cady Noland’s new works attempt to speak to exclusivity in and outside of the art world.