A paradisiacal swath of blue sky and white clouds spanned the central wall of José Guadalupe Garza’s solo exhibition. Titled Sin Fronteras / Stateless (still from a nonexistent film), 2019, the nine-foot-long vinyl banner, scaled to cinematic proportions, operated as an elusive establishing shot for the show bearing the bilingual subtitle “Al principio, pensaras que estás alucianando. / In the beginning, you will think you’re hallucinating.” The stock image is internet-sourced—as its pixelated quality suggests—while the quote is from La región salvaje (The Untamed), a surreal 2016 art-house movie by Mexican director Amat Escalante about a complicated love affair between a woman and an alien. Around this scene, eleven other works by Garza montaged text and images from a personal canon of American and Latinx films, books, and historical events—high and low, earthly and other-worldly—to reflect their influence on his life and practice.

Garza’s referentiality is more layered than a simple embrace or convenient shorthand. The artist, now based in St. Louis, was raised in Florida by parents who immigrated from Mexico. Growing up as a non-English speaker, he turned to the language not only of drawing but also of American popular culture; becoming aware of that culture’s fallacies has been disorienting, enraging, and mournful—qualities that are evident in his work. Shelter in Place (El Norte / COVID-19 remix), 2020, comprises a grid of fifteen Polaroids depicting domestic interiors: a dining room table, a flower arrangement, a cluster of memorial candles. The images’ sense of intimacy belies their origin in a 1983 Spanish-language film Garza saw on PBS as a child. The movie follows two young Guatemalan siblings who flee to the US to escape the civil war that began in 1960 in their home country—a war that was largely stoked by US interference. Reframed by Garza as everyday snapshots, the pictures and their story become, in part, his, as well as a poignant complication of the titular notion of “sheltering in place.” That concept, which became prevalent during the pandemic and recent natural disasters, remains a privilege rarely afforded refugees amid continually shifting US immigration policies. 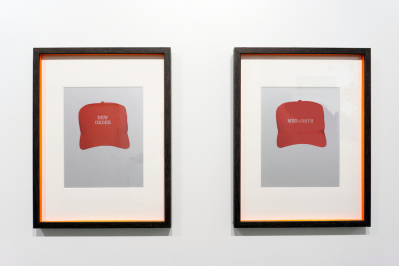 Indeed, the legacy of US imperial ambitions in and hostile policies toward South America—including those of the last presidential regime—was felt in this show as a long continuum extending into the past and future. The cyanotype diptych Foreign Policy (Burn, Hollywood, Burn remix), 2021, juxtaposes a 1986 photograph of a smiling Ronald Reagan holding up a T-shirt that reads STOP COMMUNISM CENTRAL AMERICA with a still from the 1997 movie The Game, in which Sean Penn holds up a T-shirt that says I WAS DRUGGED AND LEFT FOR DEAD IN MEXICO—AND ALL I GOT WAS THIS STUPID T-SHIRT. The work’s conflation of aggressive US political meddling with big-budget entertainment (both involving white male actors, one former and one current) is as crass as it is revealing. On the wall opposite this piece, in small framed inkjet prints, two red MAGA hats appeared with new slogans: MEGADETH and NEW ORDER, referencing both the ’80s metal and new wave bands, respectively, and the fascistic death-drive of the alt-right. Produced using a Trump hat generator created by the Washington Post in 2015, the piece doubles down on the irony of Foreign Policy while reinforcing the malignant persistence of Reagan-era politics.

Garza framed this show—full of juxtapositions and riffs, remakes and doublings—as an adaptation of the 1972 book Autobiography of a Brown Buffalo by Mexican-American lawyer, activist, and writer Oscar Zeta Acosta. Acosta was a quasi-fabulist: his books document real episodes from his participation in the Chicano movement, in which he provided legal representation for impoverished Mexicans in Los Angeles; they also include invented characters, such as the specter of his psychiatrist, with whom he had an ongoing (inner) dialogue. One of the Garza pieces grappling with such layering of fact and fiction, people and portrayals is a delicately rendered pencil-and-charcoal portrait of Marlon Brando as Emiliano Zapata in Viva Zapata!, Elia Kazan’s 1952 biopic of the Mexican revolutionary. While Brando’s brown-face is heightened, in Garza’s rendition, with the red-pigmented dust from Takis Fuego tortilla chips—a critical and self-reflexive comment on the erasures and distortions endemic to appropriation and re-creation—the image is tender, and fastidiously drawn.

Acosta’s activist legacy is best embodied in a work that initially came across as an outlier: situated near the gallery entrance, a small bilingual plaque created this year in collaboration with artist Melissa Bauer reads, “On this site in 1906, activist Ricardo Flores Magon published Regeneracion, a Spanish language newspaper credited with sparking the Revolution which built the framework for Mexico’s modern democracy.” Intended to be placed at a currently unmarked site in St. Louis to help draw attention to the city’s under-recorded Latinx history, this piece engages the past as a way to step forward and seek active connections on real and solid ground.

Using the language of popular culture, the artist interrogates the fraught relationship between the United States and South America.