There was no turning back when, in 1950, Joan Mitchell completed Figure and City, a painting in which an abstracted figure emerges from the canvas amid a crush of cuboidal forms. Prior to this breakthrough, Mitchell had been working in a semi-figurative mode, producing still lifes and urban landscapes in which anything and everything could be reduced to geometric shapes. Then, after Figure and City, she leapt into the void and began working in abstraction. “I knew it was the last figure I would ever paint,” Mitchell said of the female shown in Figure and City. “I just knew. And it was.”

In the decade afterward, Mitchell would come to refine the style for which she is now known. Many of the canvases she produced during the ’50s feature dazzling arrays of brushstrokes assembled against stark white backgrounds. Mitchell always made sure to leave her paint chunky and her colors pure and bright. The hues that she used would grow hotter as her career went on, and her gestural strokes would sometimes coalesce to form masses that appear to cluster in the center of her canvases. Impressionism and poetry, as well as nature and the cast of art-world A-listers that surrounded her, haunt her works—though their subject matter is often only revealed by their titles.

Mitchell was considered one of the most important members of the postwar movement of Abstract Expressionism. This was the case even during her day, when female artists rarely achieved widespread fame. In 1972, critic Peter Schjeldahl, for example, called Mitchell “a master of many oil‐painting techniques who seems always to be pushing her mastery to the limit, willfully throwing it against ‘impossible’ problems.”

Mitchell’s ability to resolve the unresolvable with her innovative painterly techniques will be on display in a long-awaited retrospective opening this week at the San Francisco Museum of Modern Art. (Curated by Sarah Roberts and Katy Siegel, the show will also travel to the Baltimore Museum of Art, which co-organized it, and to the Fondation Louis Vuitton in Paris.) Below, a look at why Mitchell’s piquant abstractions continue to intrigue. 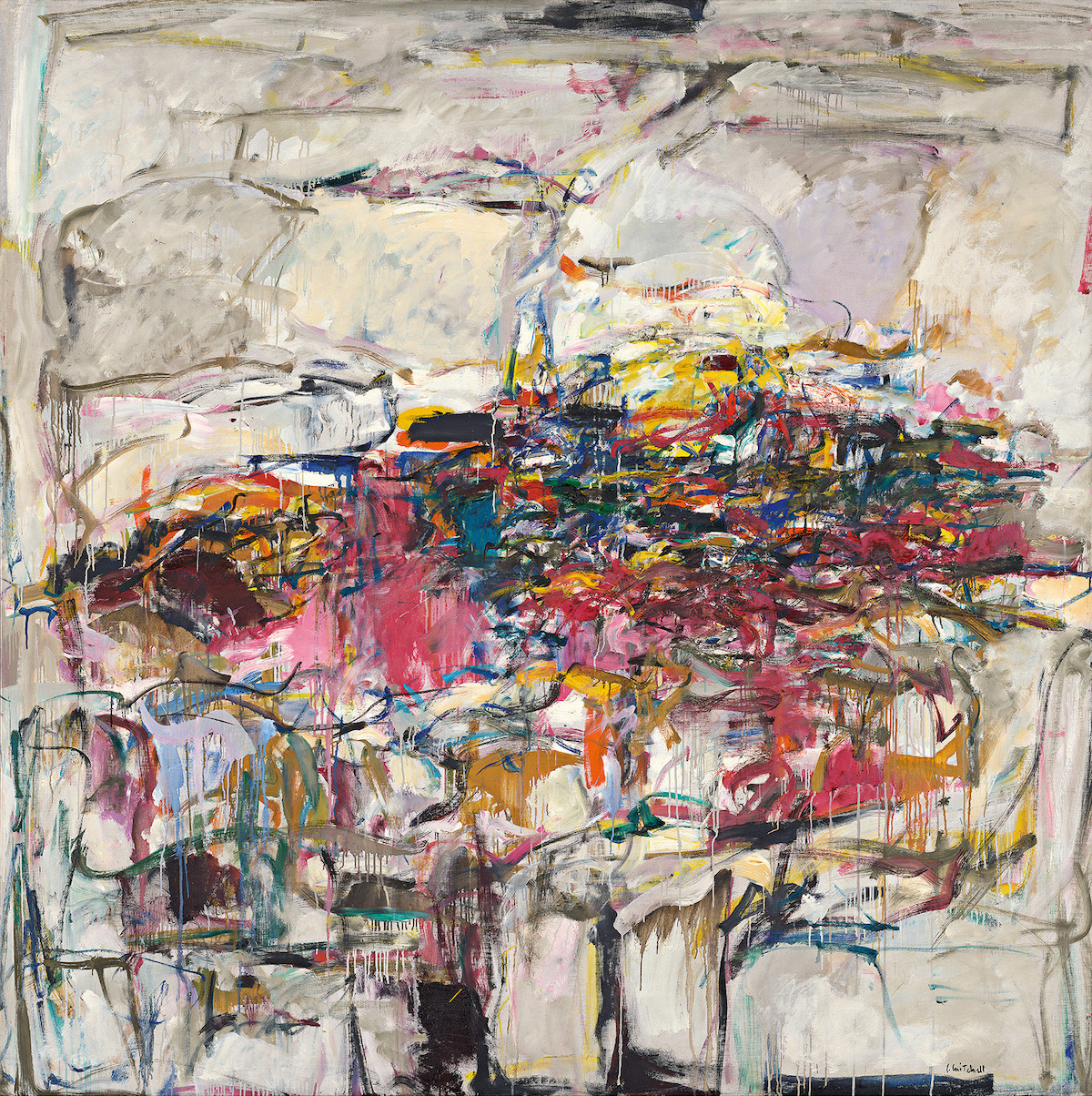 The greatest defenders of Abstract Expressionism preferred a style that has been termed all-over abstraction—think of the vast drip paintings of Jackson Pollock or the epic, elegiac black-and-white canvases of Franz Kline. A number of Mitchell’s canvases stand apart from that style, however, featuring at their core swirling masses that appear to vibrate with life. “Clement Greenberg said there should never be a central image so I decided to make one,” Mitchell once said, referring to the art critic who was Abstract Expressionism’s most vocal exponent.

The basis for Mitchell’s “central images” changed depending on her locale, her mood, and the company she kept. But trees were among the constants in her oeuvre. In Grandes Carrières (1961–62), for example, a swirling mixture of burnt umber, mint green, and deep blue looms before the viewer, appearing to float above, or stand before, a messy white background dripped and splashed with yellow. Only upon further study of Mitchell’s oeuvre would one be able to discover its referent: cypress trees in the Grandes Carrières district of Paris, which the artist frequented.

For Mitchell, trees acted as symbols of mortality and stand-ins for her loved ones. But viewers would not necessarily know this just by looking. During the age of Abstract Expressionism, content was considered anathema. Form—the ways materials were wielded and came to coalesce—was believed to be the most important way to make an artistic statement. Mitchell appears to have subscribed to that idea in her work, but unlike some of her colleagues, she also prioritized visual pleasure. In 1957, for a famed ARTnews profile titled “Mitchell Paints a Picture,” she told critic Irving Sandler, “I am not a member of the make-it-ugly school.” 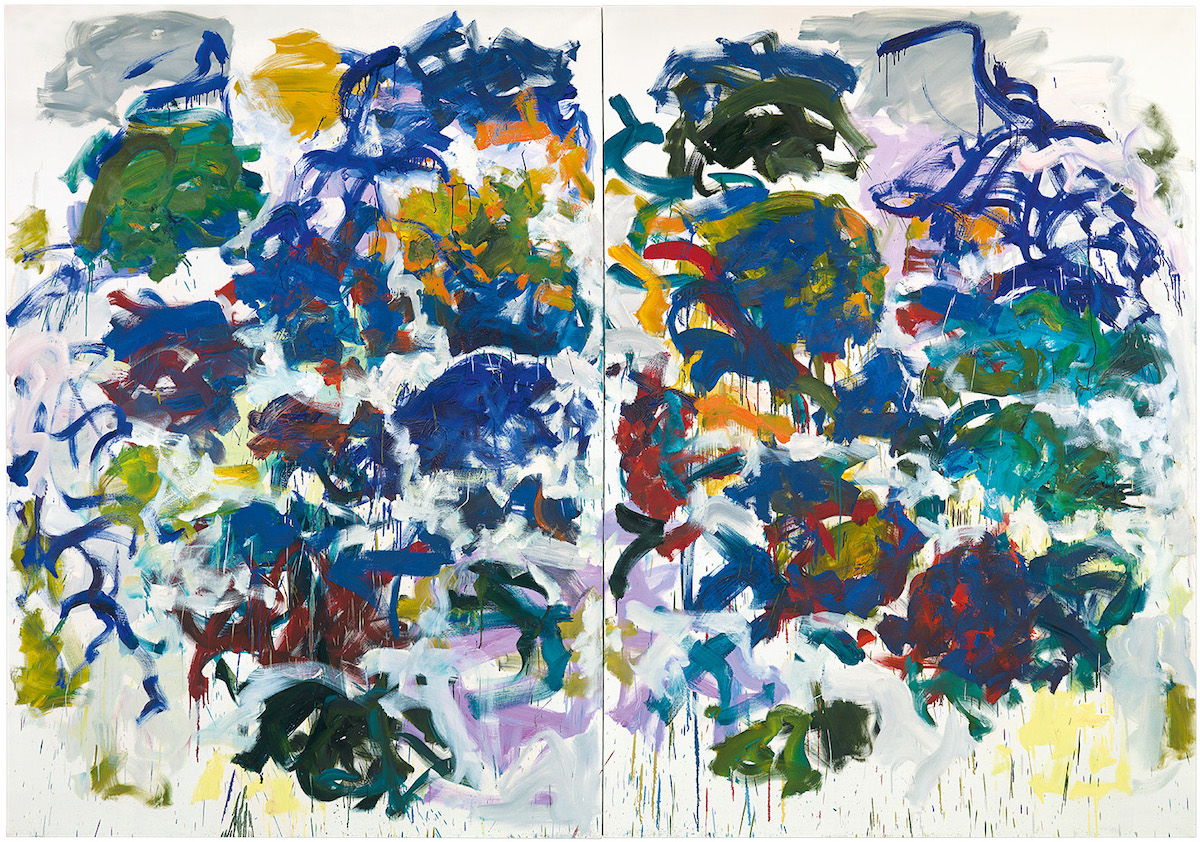 A Force of Nature

Mitchell frequently returned to two broad subjects throughout her career: poetry and nature, both of which could be seen as being related in her work. The former had been with Mitchell from a young age. Her mother, Marion Strobel, was herself a poet and an editor of Poetry magazine. When Mitchell was 10 years old, one of her poems was printed in that journal, with lines like “The rusty leaves crunch and crackle, / Blue haze hangs from the dimmed sky, / The fields are matted with sun-tanned stalks — / Wind rushes by.” 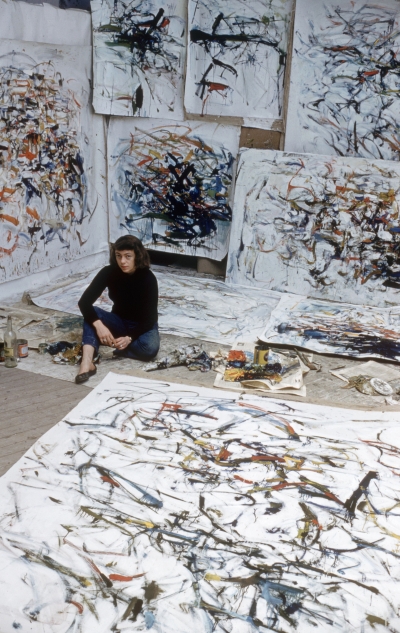 Nature, too, figured in her work, whether in the form of still lifes or abstracted landscapes. “Man made a city; nature grows,” she once wrote in a letter to Sandler. “I see it all as nature. I look at it all as what I see.” Whether she was painting bridges spotted from her New York apartment window or the vibrant scenery she saw in the north of France, Mitchell always cast an admiring eye toward her surroundings.

Many have likened Mitchell’s work to Impressionism—a fitting comparison given that she spent significant amounts of time in the historic stomping grounds of that earlier movement’s foremost names. In 1959, Mitchell took up residence in the French commune of Vétheuil, where Claude Monet had once worked. Mitchell’s large-scale, multi-canvas paintings often communicated the impact of time on nature, just as Monet’s cathedrals and gardens did.

Vincent van Gogh’s work also loomed large over her oeuvre. Particularly in the later stages of her career, Mitchell made use of eye-popping shades of yellow and blue that she lathered on thick, allowing her paint to remain chunky. Then there are the sunflowers that recur throughout Mitchell’s work, albeit in abstract ways. In the three-part painting Untitled (1969), for example, one giant yellow flower sprouts of a mass of off-white at the center, its petals rendered as globs of yellow, purple, and blue. (Mitchell, who was far-sighted, often had to stand back to see her paintings in the greatest detail, and viewing them at a remove can often bring out previously unseen flourishes.) 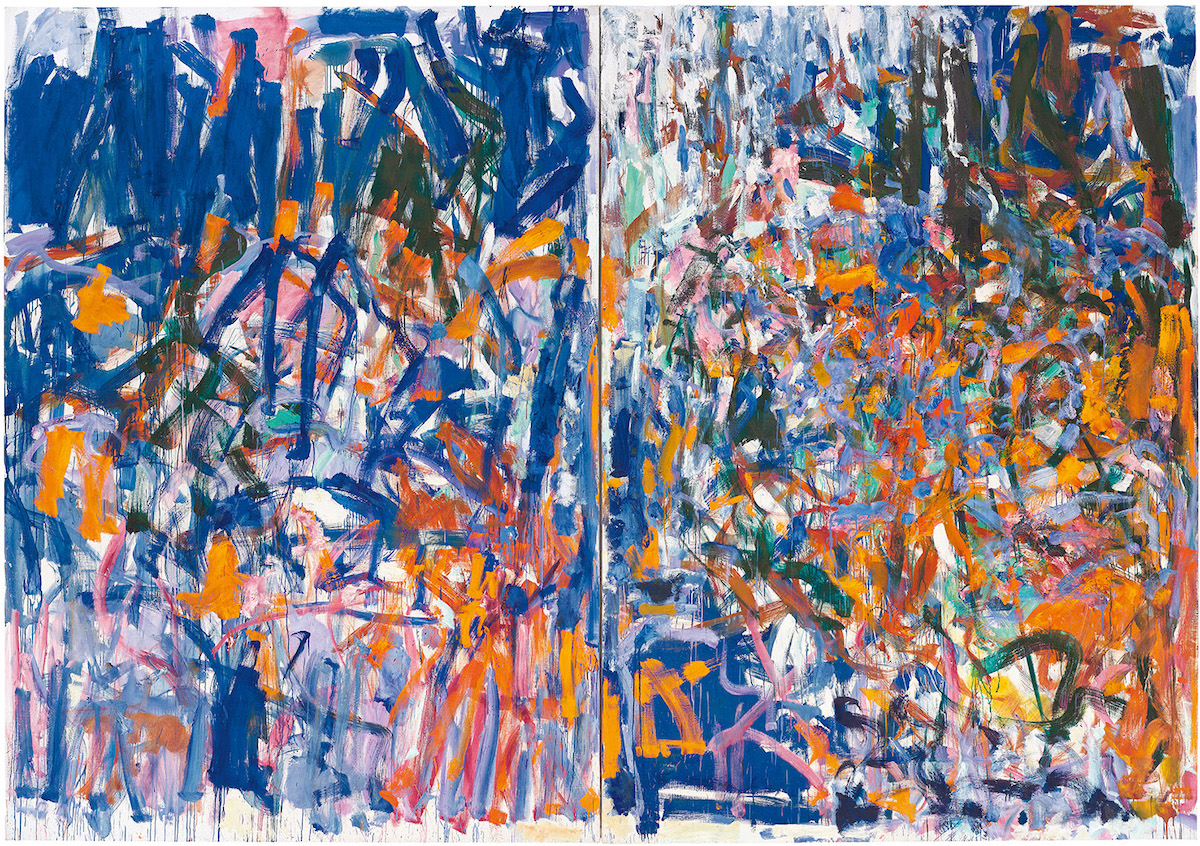 Much like her Abstract Expressionist colleagues Grace Hartigan, Helen Frankenthaler, Elaine de Kooning, and Lee Krasner, Mitchell was forced to confront her status as a woman among a group of men who often received greater acclaim—though she was certainly recognized during her lifetime. Before she turned 40, she had appeared in the Venice Biennale in Italy and Documenta in Kassel, Germany, as well as multiple solo shows at New York’s vaunted Stable Gallery that received positive notices. While in France during the ’50s and ’60s, she consorted with figures like Shirley Jaffe, Simon Hantaï, Alberto Giacometti, and others. Along with the artist Jean-Paul Riopelle, with whom she led a long and torrid romantic relationship, Mitchell even hosted some of them for dinner.

But all the while, Mitchell was often forced to contend with being labeled a “woman artist.” “Women couldn’t paint and women didn’t paint and all that sort of thing,” Mitchell told art historian Linda Nochlin of the art world in the postwar era. One time, when a man at a party labeled Mitchell and de Kooning “female artists,” Mitchell said, “Elaine, let’s get the hell out of here.” 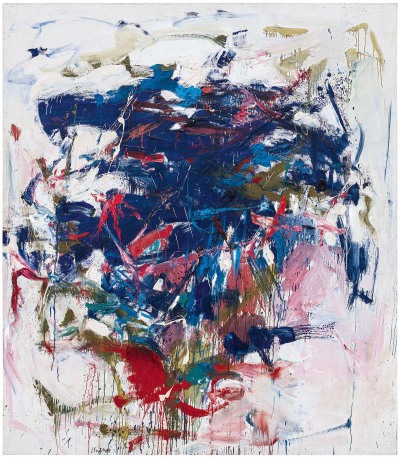 Although feminists during the 1970s sought to reimagine the ways Mitchell’s art had been discussed, the artist herself initially bristled at the notion that she should be considered apart from her male colleagues. When curator Marcia Tucker organized an exhibition of Mitchell’s art at the Whitney Museum in New York in 1972, Mitchell wrote, referring to herself, “Joan feels Miss Whitney is using her for Women’s Liberation.” A few years later, she had come around and made a point of supporting budding women artists. In 1976, she began subscribing to the Women Artists Newsletter.

These days, Mitchell’s reputation has continued to shift as critical attention and market interest around her work continues to rise. There have been books about her, including a biography by Patricia Albers in 2011 (Joan Mitchell, Lady Painter: A Life). Mary Gabriel’s recent Ninth Street Women, which chronicles Mitchell’s rise alongside other women in her cohort, is currently being developed into a television series. And earlier this year, Lévy Gorvy gallery sold a Mitchell painting at Art Basel Hong Kong for $20 million—a price that would have seemed unthinkable for a female Abstract Expressionist even a decade prior.

Mitchell’s sudden resurgence has been considered an example of the ways art history is changing. “There’s a reexploration of historical narratives that are important to our history and our culture that is happening right now,” Christina Blatchford, CEO of the Joan Mitchell Foundation, told Artnet News in 2018, “and that’s coming together with recognition of the quality of Mitchell’s work.”

A traveling retrospective opens at the San Francisco Museum of Modern Art this week.