New York’s Newest Gallery Spotlights Latinx Artists: ‘We See the Lack of Representation and the Need for It’

The new gallery Calderón Ruiz will open in September in Manhattan’s South Street Seaport district with a focus on supporting Latinx artists who have too often been underrepresented in the market.

Founded by market veterans Nicole Calderón and Mike Ruiz, the 1,800-square-foot gallery will open on September 7 at 106 South Street with a two-person exhibition of Southern California–based artists Jaime Muñoz and Esteban Ramón Pérez.

“As two Latinos working the art world for over a decade, we see the lack of representation and the need for it,” said Calderón. “Now that we have a space to facilitate that, we can help guide conversations that will make acquisitions of Latinx art possible, whether it’s with a patron or an institution.”

Calderón Ruiz will become one of the few galleries in New York with a focus of the sort. Some market observers—including Arlene Dávila, author of the 2020 book Latinx Art—have viewed the lack of support for Latinx artists as a form of erasure and have called for change. “We need to ensure that we expand collectors, so it becomes an ecosystem, where we as a Latinx community can be in charge of ourselves,” Dávila told ARTnews in an interview around the time of her book’s publication.

Calderón and Ruiz said their gallery aims to create such a support structure. “There’s not a space that does this—and that’s exactly why we’re doing it,” Ruiz said. “We want to iterate that there’s a lot to talk about and a lot of amazing artists who are underrepresented. We want to put our connections in the art world toward this group of artists and see what we can’t do.”

Calderón and Ruiz met around three years ago through a mutual friend. Calderón, who founded the art agency AVFTF and was previously a director at Timothy Taylor gallery, was at the time a director at Tina Kim Gallery, and Ruiz had been running the gallery he founded in Berlin, Future Gallery, for around a decade. After working together on transactions with shared clients, they began having conversations about their experiences of living in the United States as Latinx people. Calderón was born in Puerto Rico and is Puerto Rican, and Ruiz was born in Texas and is Mexican-American. Out of these talks grew the idea to start a gallery that would showcase the work of Latinx artists. 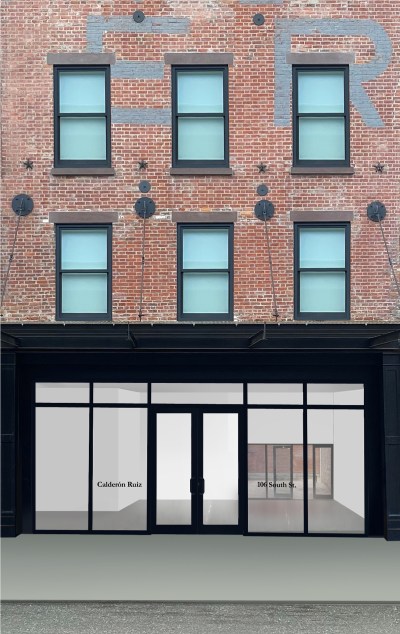 A rendering of the forthcoming New York gallery Calderón Ruiz.

During lockdown, they made the joint decision to open a gallery. “We both had this moment of ‘Oh my God, yes, we should do this,’” Ruiz said. “And so we decided to join forces to realize this passion project of ours.”

The gallery will not start out representing artists but plans to do so in the future—with a mix, Ruiz said, of emerging artists to “provide that support that young artists need” as well as more established  names “to contextualize the program.”

For their opening, the two dealers wanted to present the kind of show they felt might not be typically on view in New York. They approached Muñoz early on in their discussions about the gallery, and he suggested making the exhibition a two-person show with his childhood friend, Ramón Pérez. Muñoz will debut four-large scale paintings and two drawings in the show; Ramón Pérez will present six paintings, drawings, and sculptures.

After the first exhibition, Calderón Ruiz will present another two-person show in October, with work by New York–based artists Danielle De Jesus and Shellyne Rodriguez. The gallery’s November exhibition will be a group show, curated by Tiffany Alfonseca, to include work by Raeliz Vasquez, Kenny Rivero, Bony Ramirez, José Morbán, Diego Espaillat, and Devin Osorio. Other planned exhibitions include shows for Tiffany Alfonseca and Nora Maité Nieves.

Calderón Ruiz’s program is meant to showcase diversity within Latinx art, which the gallery’s founders view as multifaceted. “This demographic of artists is often bracketed into one thing, but actually it’s many different identities that get lumped into one category,” Ruiz said. “We want to dispel this myth and delve into the rich complexities of many identities.”

Calderón Ruiz will open in September in Manhattan’s Seaport District.