On October 4, Instagram, along with its owner, Facebook, broke. For the better part of the day, no one could access it, and my Twitter feed was filled with artists chronicling the sweet freedoms of life without the app which, since it launched in 2012, has become the art world’s platform of choice.

I immediately thought of Instagram’s upheaval as a kind of glitch—to use curator and writer Legacy Russell’s word—and hopefully, a productive one. “We change course,” writes Russell, in her book Glitch Feminism: A Manifesto, “when confronted with systems that refuse to perform.”

For Russell, a glitch can refer to a technological failure, such as a computer virus or blackout, and also to “glitched bodies,” those that do not fit into white supremacist, patriarchal, and heterosexist ideal norms for how a person ought to look, think, and behave. Her book highlights the work of gender binary–challenging artists of color, many of them trans and queer, who embrace the interconnectedness of the digital and the “real,” and also challenge their hegemonies. Russell adds, “Glitched bodies pose a threat to the social order. Range-full and vast, they cannot be programmed.”

I am a queer feminist artist who is active on Instagram, and weary of struggling with being censored there. Many of my peers depend on Instagram for their livelihood. Many use it for community-building, which can also be life-sustaining. Like many queer, feminist, trans, POC, fat, disabled, and sex worker artists, I use Instagram in constructive ways, but struggle with the platform’s constant censorship of my work. From the perspective of algorithms and content moderators, the bodies I depict in my paintings are legible only as “inappropriate”—read: pornographic. These bodies do not feed the capitalist machine of essentialized “female” bodies as consumable—as selling agents. They are queer, trans, old, fat, disabled, multiracial, and often female-identified. They have breasts that sag, nipples that tell stories, asymmetrical parts, arms that are wrinkled, scars from surgeries and body modification, synthetic hormones that make it all unreadable to the gender binary-entrenched system. 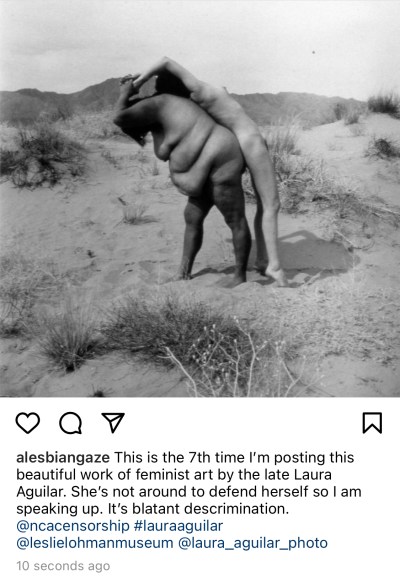 If all of that sounds vague, let me give you a concrete example: Recently, I posted on Instagram a photograph by the artist Laura Aguilar, who died in 2018, to mark the appearance of her long-overdue traveling retrospective at the Leslie-Lohman Museum in New York. The image shows Aguilar and another woman nude, from a distance, in a desert landscape as Aguilar lifts the other person up in the air. The post was taken down, so I reposted it. This went on eleven times.

The image only marginally violates Instagram’s “Community Guidelines,” which state “[F]or a variety of reasons, we don’t allow nudity on Instagram. This includes photos, videos, and some digitally-created content that show sexual intercourse, genitals, and close-ups of fully-nude buttocks. It also includes some photos of female nipples, but photos in the context of breastfeeding, birth giving and after-birth moments, health-related situations (for example, post-mastectomy, breast cancer awareness or gender confirmation surgery) or an act of protest are allowed.” The women’s genitals are not clearly visible in Aguilar’s photograph and their nipples meld with the landscape. There was nothing graphic or even overtly sexual here; there was simply Aguilar’s beautiful, fat, Latina lesbian body in a desert landscape.

Instagram’s policies, however, make an exception for nudity in painting and sculpture, in essence declaring that photography is not a true fine art form. After the 11th time I posted the work, my own account was threatened with removal.

This kind of censorship does not exist in a digital vacuum. It took Aguilar decades to get recognition for her work, which is still undervalued, arguably because of subtle and entrenched racism, homophobia, fatphobia and misogyny—biases that existed long before social media. 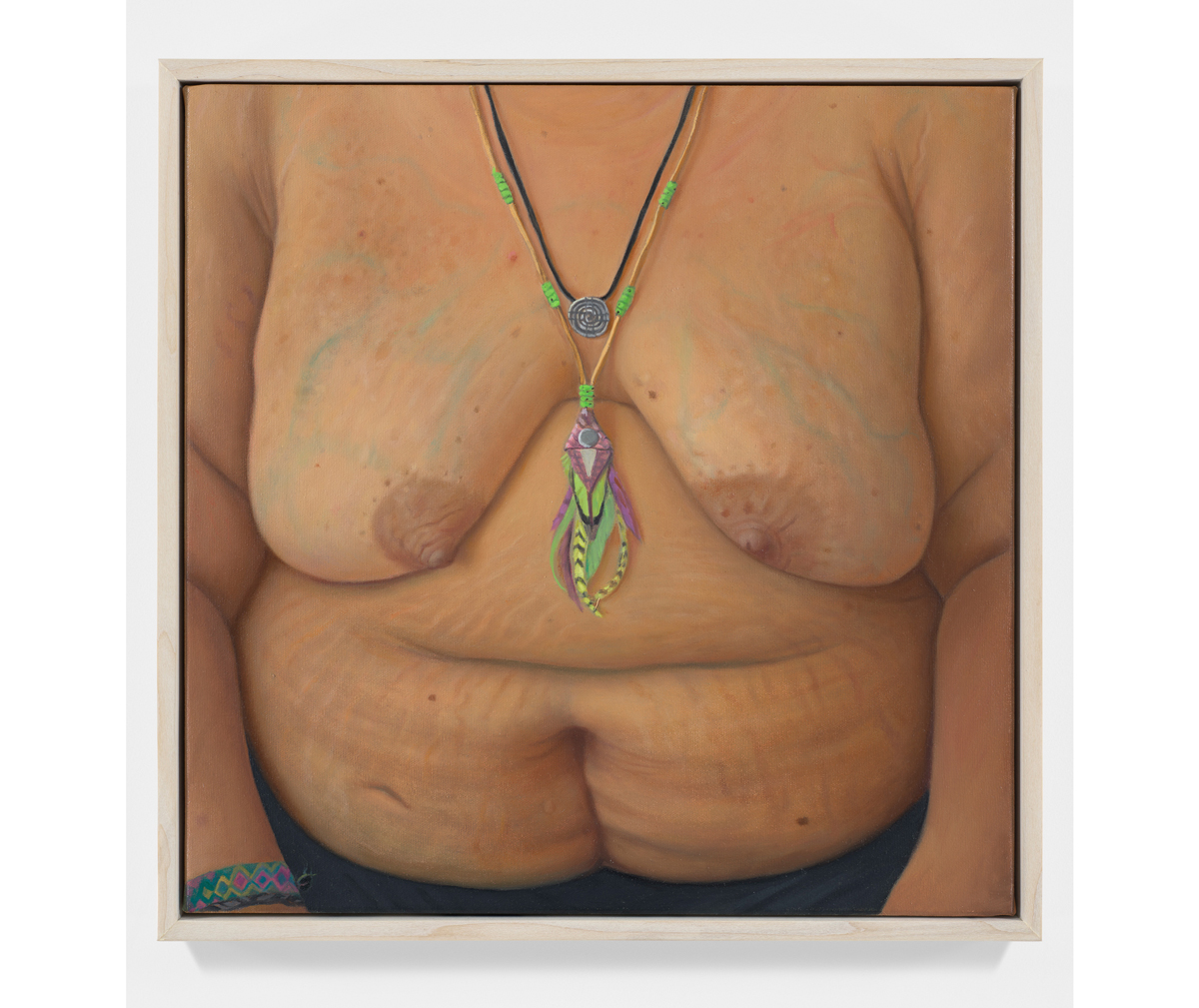 The digital world, Russell points out, is not separate from “real life.” It is one and the same, exhibiting the same white supremacist violence, the same heteronormative, patriarchal aesthetic standards, the same erasure of marginalized bodies and voices.

With uncanny timing, on the same day of the Facebook outage this week, Frances Haugen, a former Facebook employee and now whistleblower, unveiled her exposé of the ways Facebook encourages hate and misinformation on their platforms. Since then, social justice groups have taken steps to hold Facebook accountable. Kairos, a technology-focused racial justice group, is organizing a nationwide boycott of Facebook on November 10. Among the demands of the boycott are the removal of Mark Zuckerberg as CEO and an overhauling of content moderation policies. Free Press, a media and technology activism and advocacy group, is petitioning Congress to pass legislation that would regulate Facebook with the goal of minimizing hate speech, misinformation, and discriminatory algorithmic practices.

I believe that as art workers, we must participate in activist measures against Facebook, so that as new possibilities are envisioned, our concerns about art censorship aren’t swept under the rug. The platform’s erasure of certain kinds of work—not just Aguilar, but also the photographs of Robert Andy Coombs, the performances of Lena Chen, and the paintings of Alannah Farrell, to name just a few—has the net effect of discouraging the making and exhibiting of that work. It erases art that is confrontational, that expresses points of view outside of the mainstream, while promoting art that is decorative and/or unchallenging, that looks good when scrolled past but not engaged with at length. 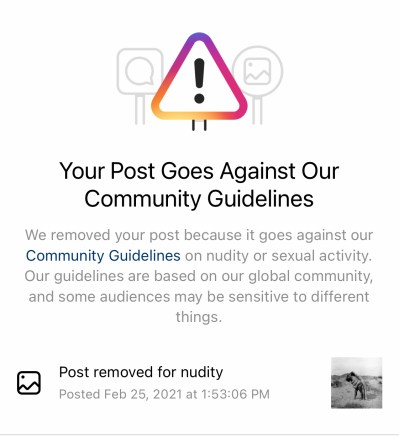 A screenshot of the notice of removal for the author’s posting of an artwork by Laura Aguilar.

We must wake up to the fact that, with the art world so reliant on it, Instagram has far more power than it should to dictate the present and future of art and culture. Many of us have said that if there were an alternative to Instagram for the art world, we would use it. But no other similar app exists, and with the way larger tech companies acquire would-be competitors, it feels almost unlikely that one is forthcoming.

Russell sees a glitch as a kind of “joyful failure,” and if this outage makes us more conscious of these problems, and prompts us to act, then it has been productive. As we topple monuments, and as museums acquire more works by women and people of color, we must also consider how to reformat the digital realm and the ways in which certain artists—mostly LGBTQIA+ ones—are marginalized there. Culture has become inextricably bound with the virtual, as has our cultural future. If we don’t care about digital freedom and equity on Instagram, then we won’t achieve it anywhere else.

Social media can be a place of refuge, creative community and self-definition. It can sustain artists’ livelihoods. It is worth fighting for. We must hold these enormous companies accountable for their abuses of power, and continue to find ways to carve out space for ourselves, for our honest and brave work. Spaces for celebration, and for survival.

Consider not what you see on Instagram, but what you don’t, says artist Clarity Haynes.