When Sandy Grotta began collecting American craft, there were no contemporary craft collectors. The year was 1957. She and her husband, Lou, stopped in to see “Furniture by Craftsmen” at the Museum of Contemporary Crafts in New York (today’s Museum of Arts and Design), then a non-collecting venue only in its second year of operation in a tidy townhouse next to the Museum of Modern Art. Among the 39 furniture-makers included in the exhibition were Joyce and Edgar Anderson, not long in business just outside Morristown, New Jersey. The Grottas, who were in the process of setting up house, were taken by the Andersons’ work; they got in touch and put in an order.

It was the beginning of a lifelong commitment to contemporary craft. For a long while, the Grottas would not have described themselves as collectors at all. They always had at least one piece on order with the Andersons (for whom quality was always at a higher premium than speed), and they also cultivated friendships with other craftspeople nearby, such as the ceramic artist Toshiko Takaezu. But everything they acquired, for decades, was acquired to use.

Sandy, meanwhile, was developing a career as an interior designer. Possessed of remarkable confidence in her own stylistic choices, she was the Marie Kondo of her time, advising her clients to pare away the clutter so that a few well-chosen things would sing out.  She often recommended craft makers of her acquaintance. In this organic way, the Grottas not only became pioneering collectors in their own right, but also influenced others to follow their lead—most importantly their son Tom, who, with his wife, Rhonda Brown, would go on to found browngrotta arts, the nation’s leading gallery for fiber art.

By the 1980s, with craft collecting now a widespread phenomenon, the Grottas were essentially living in a total work of art. They commissioned a house from the architect Richard Meier, a childhood friend of Lou’s. Completed shortly after Meier’s High Museum of Art in Atlanta and prior to his Getty Center in Los Angeles, the building’s Vitruvian gridded and curved forms made an ideal backdrop for warm, subdued ceramics and baskets. The couple’s dining table, by the Andersons, was invariably set with geometric precision—an exhibition in its own right, but entirely functional. Sandy dressed the part, too. Often garbed all in white, she was also among the first people to collect contemporary studio jewelry in an ambitious way. She thought nothing of sporting “wearable sculptures” on an everyday basis. 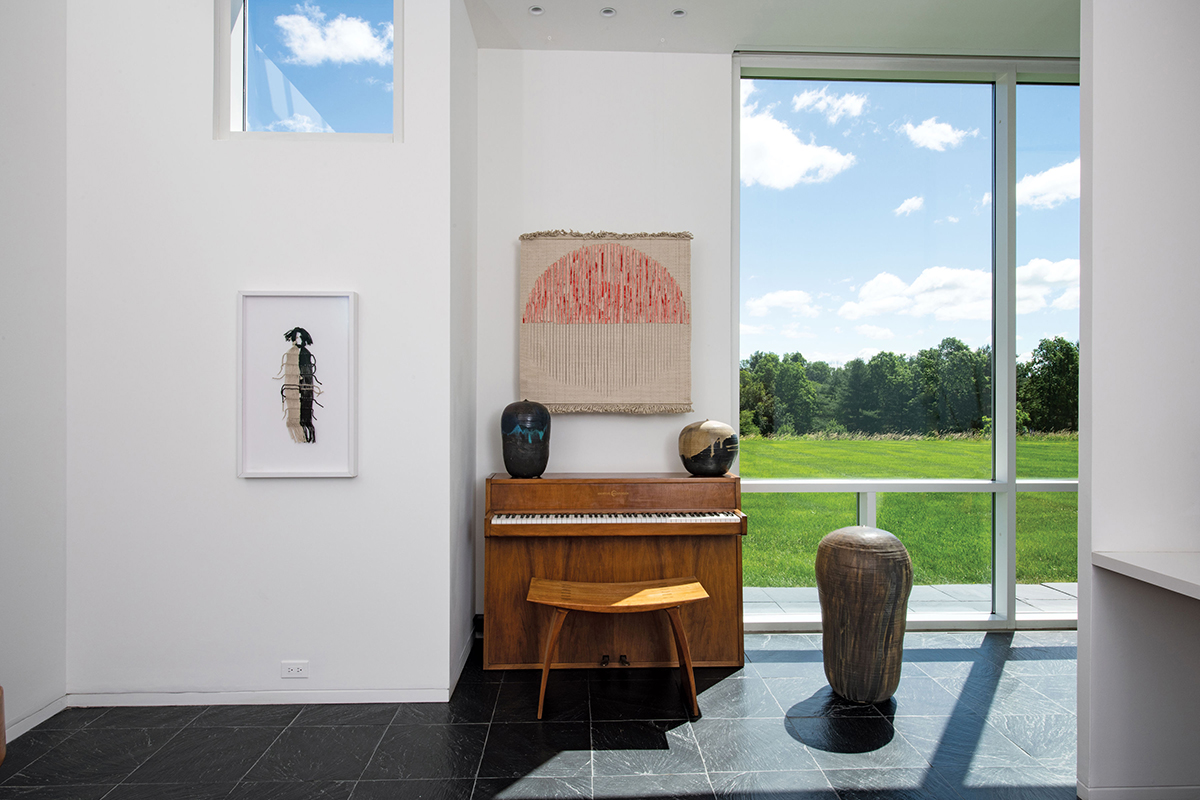 Interior view of the Grotta home, including ceramics by Lenore Tawney, a bench by Toshiko Takaezu, and a piano by Edgar and Joyce Anderson.

The Grottas maintained close relations with the museum that had started them out on this path; Sandy served on the board of trustees of the Museum of Arts and Design (MAD) from 2002 to 2015. “Her support for contemporary craft was legendary,” said Elissa Auther, the institution’s chief curator. “Sandy worked tirelessly to sustain MAD as the preeminent institution in the field.” These efforts included her leading role in organizing development events. One well-remembered fundraiser, dubbed “Eat at McDonald’s,” was held sometime around 1990 in the Rockefeller Center franchise of the fast food chain. Tom Grotta recalls the bemused patrons, many of whom had never eaten in a McDonald’s in their lives, nibbling french fries and poached salmon (served on silver platters by staff members in black tie), then ordering Quarter Pounders at the counter.

That occasion, gently humorous and democratic while serving a pragmatic purpose, reflected Sandy’s personality well. Even as she and Lou shaped themselves into leading patrons of the arts, living in what can only be called aesthetic splendor, they never became the least bit pretentious. They were, after all, “only” craft collectors—feet on the ground, buying things they loved, usually from people they knew well. Today, almost 75 years after they got started, their approach to collecting may seem a little old-fashioned. But if so, it’s time to bring it back: their personal, self-directed model of patronage is worth relearning in each new generation.

The interior designer and Museum of Arts and Design trustee treated craft objects as art to live with.
Facebook
Twitter
Google Plus
Yahoo Mail
Linkedin