Barbara Bloom’s art might be regarded as an archaeological study of recent civilization. Through sculpture, photography, and text, she explores unexpected visual and thematic connections among art, artifacts, literature, mass media, film, and other cultural forms. She presents her findings in elaborate museological displays framed in scholarly language—all of which suggest kinship with Conceptualists from Joseph Kosuth to Fred Wilson. Ultimately, however, the works, such as those in this recent exhibition at David Lewis, “Works on Paper, on Paper,” are more imaginative than pedagogical. They are also often humorous, poking fun at the cultural institutions whose practices and presentations they mimic.

For this show, the Los Angeles–born, New York–based artist presented seven large-scale installations from the series “Stand-Ins” (1986–2021), plus six smaller works from the series “Objects of Desire” (2020). All pay homage to iconic cultural figures: Joan Didion, Jean-Luc Godard, Marilyn Monroe, Susan Sontag, and Andy Warhol are subjects of the first body of work, while Jane Austen, Roland Barthes, James Joyce, Jacqueline Kennedy Onassis, and others feature in the second. In an interview connected to the exhibition, Bloom refers to these pieces as “portraits,” but they do not all render likenesses. Instead, the subjects are largely implied through objects.

The Problem with Joan Didion (2021), for instance, consists of a life-size re-creation of Didion’s mantelpiece (rendered in white-painted wood), based on a photo of the writer in front of the fireplace in her Park Avenue apartment (a small color print of which is included in the tableau). Bloom faithfully arranged on the mantel the same paperweights, gas lamps, figurines, and other knickknacks, here remade in white translucent blown and cast glass. In her elliptical, rather whimsical way, Bloom invokes the ghost of Didion’s living room, as well as the spirit of the author herself. For the artist, the bric-a-brac also alludes to the criticism Didion received throughout her career, her “problem” of being unapologetically bourgeois. On an adjacent wall, a Victorian glass lachrymatory, a vessel used to collect tears, refers to the tragedies that fill Didion’s life and stories. While Bloom has written of Didion as an “alter ego” and admires the “forensic attention to detail” in her writing, this last element of the installation in particular suggests that her portraits are at once sympathetic and sardonic. An example of Bloom’s sense of humor, it also demonstrates her own forensic attention to detail in these homages. In each work, she conveys a degree of reverence for her subjects, but tempers it with a dash of sarcasm. 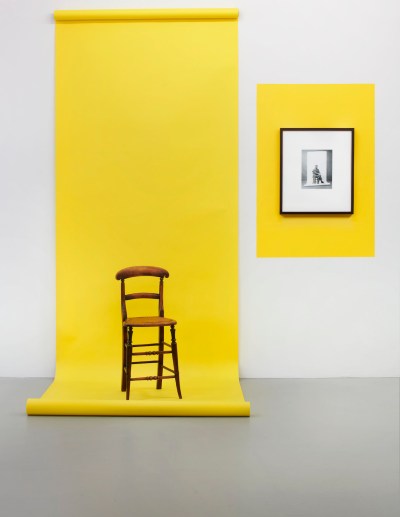 Most of the “Stand-Ins” suggest a mise-en-scène, with objects arranged in front of a paper backdrop (hence the show’s title) of the kind used for professional photo shoots. In the gallery, the paper unrolled from high on the wall down to the floor and several feet into the room. One of the most striking works that was on view, Homage to Jean-Luc Godard (Corrected), 1986-2021, features such a backdrop in bright­ yellow that runs under a wooden chair. The installation references a 1961 portrait of Godard by German photographer and gallerist F.C. Gundlach (a framed reproduction of it hung on the wall against a painted background of the same hue) in which a similar length of paper, whose edges are fully visible in the frame, unrolls from the wall, dwarfing the pioneer of French New Wave cinema. Godard sits bolt upright in a rather childlike posture with legs crossed and hands folded. In the 1986 version of this work, Bloom mistakenly used a Thonet brand chair. In subsequent research, she discovered that Godard was seated on a nineteenth-century posture correction chair for children; one such Victorian seat now appears in the “corrected” 2021 version. Bloom was attracted to the found portrait partly because of Gundlach’s “pseudo set,” which “lets the viewer in on the fiction of the photo shoot.” That gesture points to the devices behind Godard’s filmic techniques for establishing the fiction of seamless movement: for Breathless (1960), for example, the film director pushed his cinematographer around in a wheelchair to create the tracking shots.

A particularly wonderful example of the crosscurrents of literature and art in one of Bloom’s “Objects of Desire,” Barthes’ Exercises (2020), consists of a drawing table of the artist’s design with a small attached vitrine. On the Plexiglas-covered table is a facsimile of one of the writer-theorist’s calligraphic gouaches featuring asemic script. The vitrine contains a photo of Barthes, who referred to himself as an amateur artist, seated alongside his art supplies. That this elaborate work evolved from a little-known aspect of Barthes’s life is characteristic of Bloom’s unexpected treatment of her subjects. Her seemingly arcane allusions mimic the intellectual rigor of scholarly museum presentations, but in these ersatz portraits, Bloom offers an intentionally unsettling blend of fact and fiction.

In her wry “Stand-Ins,” Barbara Bloom homes in on details of possessions and found images to capture the lives of artists, writers, and cultural luminaries.