Sotheby’s “Ape In!” sale achieved $26.2 million, setting a record for an NFT auction at the house. The sale, which took place this morning, had been initially estimated to bring in between $12 million and $19 million. It surpassed the result from Sotheby’s “Natively Digital” sale in June, which realized $17 million. (NFT sales are denominated in dollars, but payments are usually made in Ethereum cryptocurrency. When asked to confirm what currency the buyer used, a Sotheby’s representative responded: “At this time we can’t comment if the buyer will pay in fiat or crypto.”) 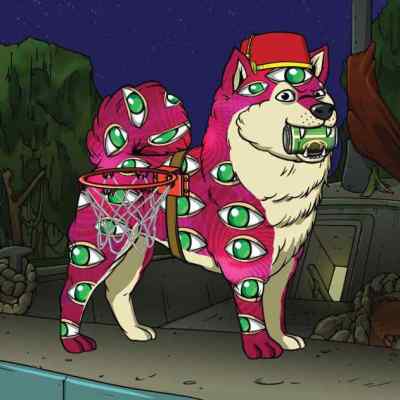 The sale only had two lots on offer. One was a bundle of 101 Bored Ape Yacht Club NFTs. That lot realized $24.4 million. Bored Ape Yacht Club (BAYC) is a profile-pic project (à la the popular Crypto Punk series) with 10,000 unique Apes, each has traits of varying rarity. The Apes exploded in popularity and price since they were released in April. Just last week, Bored Ape #3749, sporting a sailor’s cap, gold fur, and lasers coming from its eyes, sold for $2.6 million on the NFT trading platform OpenSea.

Part of the draw of owning an Ape is that by holding this NFT, one gains access into exclusive messaging platforms like Discord and Telegram for BAYC collectors, and the community that has been generated there is extremely active. The winning bidder received an additional perk: six “mutant serums,” which can be used to generate mutant varieties of an Ape within the lot.

The second lot was a collection of 101 Dogs from the Bored Ape Kennel Club. The Dogs are also a set of 10,000 generated NFTs with unique combinations of traits and regarded as pets of the Apes. They somewhat resemble Shiba Inus, a breed which has considerable significance to the crypto community because it associated with the famed Doge meme and a related cryptocurrency. This lot realized $1.84 million.

There were bidders from eight different countries, and as has been the case for auction houses offering NFTs, many of the bidders were new to Sotheby’s. Michael Bouhanna, Sotheby’s co-head of digital art, observed that legacy art collectors were also heavily involved in the bidding. “We’re seeing a growing number of traditional art buyers getting interested in NFTs,” Bouhanna said in an interview with ARTnews. For collectors new to the NFT game, BAYC represents an investment in a community and participation in what is becoming an iconic crypto collection.

Sotheby’s isn’t the only auction house offering profile-pic NFTs. Christie’s will sell a selection from BAYC, Meebits, and CryptoPunks at its “No Time Like Present” auction next week.

The sale set a record for an NFT sale at the auction house.
Facebook
Twitter
Google Plus
Yahoo Mail
Linkedin