The Anxiety of Imitation: “Dürer and After” at the Clark Art Institute

Printmaking was the “new media” of Albrecht Dürer’s day, and—as with internet memes—authorship was not just obscure but often irrelevant. There was no copyright, only “grants” of exclusivity handed down by popes and monarchs. Dürer wrote in the introduction to one bound-volume edition of his woodcut series The Life of the Virgin (1511) that anyone bootlegging his work would have to answer to Holy Roman Emperor Maximilian. Like an FBI warning on a VHS tape, the threat was futile. Dürer’s images persist in the art historical lexicon not only because of their delicate intensity, but because they were widely copied.

To the contemporary eye, “Dürer and After” is a show of flagrant plagiaries. Next to exquisite woodcuts, etchings, and engravings struck from the master’s own plates, most during his lifetime, hang exacting copies, examples of the flood of reproductions that both attested to and assured Dürer’s status as the preeminent Renaissance printmaker. There are tributes, like an Adam and Eve executed by Jan Wierix as a sixteen-year-old apprentice, and near cons, like the mature Wierix’s version of Melencolia I (the only print Dürer titled), where the copyist’s mark in the bottom margin can easily be trimmed or covered. Part of the show’s pleasure is glancing back and forth, studying the minute differences—flaws, even—in those after-images of Dürer’s unsurpassed intaglio. Many reproductions skimp on forking branches and flying birds; the faces in Israhel van Meckenem the Younger’s engraving Four Nude Women look subtly diseased. Indeed, as Steichen et al. did for photography, it was Dürer, in his overwhelming virtuosity, who pushed printmaking from a sort of rude souvenir status to an art form in its own right.

Dürer’s prints were so famous that subsequent artists could make political statements by pointedly departing from their sources. In a ca. 1580 version of Dürer’s Saint Jerome in His Study (1514), the Protestant printmaker Wolfgang Stuber gives the scholar-saint Martin Luther’s features and adds an anti-papal inscription. Modern riffs on Dürer’s compositions go further: a watery impression of Melencolia I rears up in the background of James McBey’s 1932 portrait of the gloomy Victorian poet James Thomson; a satirical 1915 lithograph by Maurice Louis Henri Neumont replaces the central trio in Knight, Death, and the Devil with imperial Germans—the knight in a general’s garb, the devil with spiked helmet and gas mask—trampling over a trench full of soldiers. 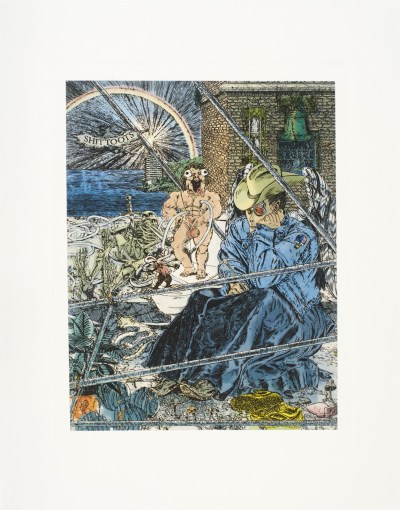 Then there is Parker Ito—the only living artist, by far the most irreverent “after,” and the savviest inclusion in this smart but grisaille show. A vitrine in the last gallery displays two pages from a 2016 portfolio in which Ito reconstituted three of Dürer’s masterworks using contemporary tropes from cartoons, anime, and pop culture. Melencolia 2 has the phrase shit toots on the blade of a pike; Dürer’s avenging angel is a battle-weary cyberpunk, and the cherub wracks and twists its cherry-red genitals. They reside on a wharf scattered with historical debris and barbed wire, lanced through with stark, thin pipes. Ito’s homage is as detailed as it is crude. Me, Death, and the Devil situates the artist (self-portraits being another Dürer flex) in medieval armor and red cap turned backward, riding a robot steed betwixt a druggy, melting Death and a bong-ripping, Pan-like Devil. A sharp-toothed horse lurks to one side, a slinking Pluto to the other, as if hungry for the carrion of culture.

Ito’s edition—three photo etchings shown in five states of production, black linework followed by successive color passes—is an illustration of contemporary virtuosity. It’s also a limited edition: where Dürer’s prints ran rampant, Ito’s tributes circulate in a postmodern art system well constrained by ideas like intellectual property and appropriation. In light of Dürer’s many imitators over the centuries, this contemporary scarcity seems artificial. This, too, is part of Ito’s gesture: he came up in the net art scene, and has long explored how ubiquitous, anonymous digital images might coexist with his own rarefied authorship. Ito’s Dürer prints are rich and rewarding in themselves. But Ito clearly believes that it’s not technical skill that matters so much as semiotic alacrity, a mastery of references, codes, and cultures—for which Dürer provides the linework.

Dürer’s images persist in the art historical lexicon not only because of their delicate intensity, but because they were widely copied.