The Kunsthalle Where No One Can Hear 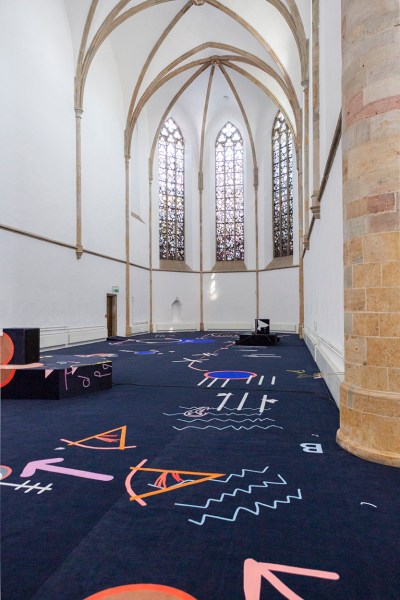 Alison O’Daniel, What we feel when we hear, 2021, carpet, wood, subwoofer.

The building now occupied by Kunsthalle Osnabrück used to be the chapel of a German monastery, so its acoustics—with a nave meant to amplify the voices of a priest and choir—are sometimes at odds with its present-day function. The pulpit and choir loft, once ideal locations for projecting voices, have been removed. Try and speak to the person sitting next to you where art installations now replace pews, and the sound practically evaporates into the air, leaving audible only a distant reverberation. So when the institution’s directors decided to make the theme of this year’s exhibition program “Accessibility”—which in German, is, tellingly, Barreirfreiheit, or “barrier-free-ness”—the hard of hearing artist and filmmaker Alison O’Daniel immediately came to mind. In a sense, all visitors to the space are rendered hard of hearing, too.

O’Daniel, who is based in Los Angeles, has long made work considering the unique perspectives that Deaf people bring to sound. She decided to create a site-specific installation, designed remotely due to Covid travel restrictions. For “I Felt People Dancing,” on view through February 27, she asked two Deaf residents of the town to visit the Kunsthalle and draw maps recording their experience of the space’s sounds. The maneuver was based on the artist’s conviction that hearing people don’t have to “think about sound in as profound and imaginative ways as Deaf and Hard of Hearing people must.” O’Daniel then merged the drawings into one map and reproduced it to scale in the form of a colorful carpet. Arrows, for instance, evoke the path that a clap or stomp might travel before returning in the form of an echo. The symbols aren’t all decipherable, and it’s not clear which collaborator drew what symbol. Instead, the carpet captures the absurd chaos of the building’s acoustics—and moreover, the feeling of being hard of hearing in a world chock full of incomprehensible sounds. When the artist finally got to travel to Germany to install the work in June, she was stunned upon noticing that the space gave others “the most accurate experience of how I hear.” 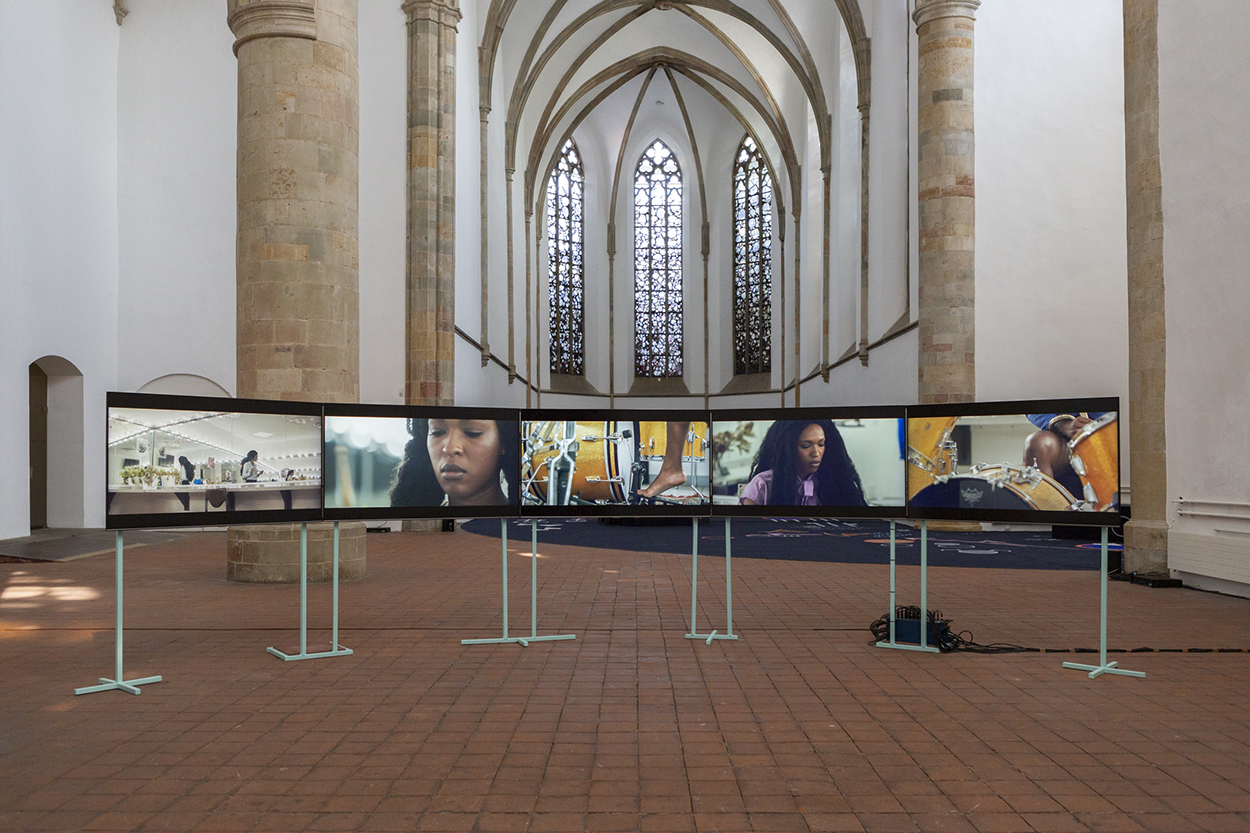 Also part of the exhibition is a 5-channel version of O’Daniel’s forthcoming feature film The Tuba Thieves, a true-crime film of sorts that was inspired by a thief who, in 2012, targeted the marching bands of several Los Angeles high schools, stealing only the tubas. The artist came to see bands without tubas as a fitting metaphor for her experience of missing certain sounds and trying to fill in the gaps. The film-in-progress narrates attempts by those marching band students to rethink their music without that key instrument. Starring a Deaf drummer named Nyke Prince, the film pays homage to John Cage’s silent work 4’33” (1952) and tells the story of the last punk show at the Deaf Club in San Francisco in 1979. The film includes a score by Christine Sun Kim, a Deaf artist, who, like O’Daniel, has reclaimed sound as one of her mediums. Its captions don’t merely transcribe and describe the film’s sounds, but also help the narrative unfold. They contain crucial information not found anywhere else in the film, like advice for watching its nonlinear structure (watch it “simply” and “as one watches the stars and sea”). When an excerpt from the film plays as part of the installation in Germany, the speakers are covered in carpet and turned into seats that vibrate. They are also positioned far away from the visuals or even pointed straight at walls, a maneuver that divorces the image and sound and exacerbates the space’s acoustic oddities.

Meanwhile, as the number of Covid long haulers who’ve lost their sense of taste and/or smell continues to grow, O’Daniel seeks to create solidarity among those experiencing sensory loss in her latest curatorial endeavor. A video program titled “Hearing Aids,” on view at San Francisco’s McEvoy Foundation for the Arts through December 4, features works by Jill Magiad, Sky Hopinka, Jenny Brady, and others in which sounds are amplified by devices that often render them indecipherable—much like O’Daniel’s hearing aids. In Nancy Holt and Richard Serra’s 10-minute Boomerang (1974), for example, Holt’s voice is echoed back to her on a delay, and she becomes unable to concentrate. Here as in Osnabrück, illegibility yields frustration and humor at the same time; O’Daniel posits absurdity as a productive sort of friction.

In a new installation, hard of hearing artist Alison O’Daniel responds to the bizarre architectural acoustics of a former church in Germany.