The World on a Single Plane: Joseph E. Yoakum at the Art Institute of Chicago

Joseph E. Yoakum’s origin story has long been inseparable from the reception of his artwork. In 1962, when he was a 71-year-old retiree living in a storefront apartment on Chicago’s South Side, Yoakum had a dream in which he was urged to make art. He drew nearly every day for the remaining ten years of his life, using inexpensive paper, ballpoint pens, pastels, colored pencils, and sometimes watercolors to create more than two thousand pieces that constitute an atlas of his psychic geography. Among his best-known works are undulant landscapes that are almost psychedelic in their vertiginous perspectives. “What I Saw,” on view at the Art Institute of Chicago, gathers nearly one hundred of these works, plus portraits, sketchbooks, and ephemera—a small but revelatory fraction of Yoakum’s singular output.

Jim Nutt, a fellow Chicago artist, and one of many influenced by his predecessor’s enigmatic oeuvre, once categorized Yoakum’s work as “exciting to ponder [but] difficult to describe.” That difficulty is two-pronged. The first issue is Yoakum’s disorienting style. His landscapes (named after real places, sometimes misspelled) typically occupy one visual plane, in which mountains, a ribbon of empty highway, and stands of conifers might coexist in woozy harmony. Cliffs drift and sway, more flamelike than earthlike, even as their striations draw attention to geologic time. In the undated Mt Colbart of Nome Alaska, for example, the mountains resemble veiny ziggurats with apertures in which improbable layers of alpine forests jostle. In Weeping Pebble of Sirrea Range in Virginia Park Nevada (1967), a prairie dog or other desert creature is almost as tall as a nearby cactus; a flower is as big as a tree. In Yoakum’s world, scale is more poetic than spatial.

The second difficulty is the mismatch between a work’s title and what it represents. As a runaway teen, Yoakum worked for traveling circuses, and he said he’d set foot on every continent except Antarctica. His landscapes are a fabulist’s enjambments in which memory meets invention. Arabian Desert Near Sudi Arabia (1964) includes verdant pockets of trees and weeds not native to that region. Ground Floor of Grand Canyon Colorado River Near Arizona State Line, from the same year, features two houses and a derrick nestled inside a womb-like cavity in the canyon’s rock wall, an unreal scene that merges domesticity with craggy wilderness. Yoakum’s unpeopled geography isn’t severe, though. Its dynamism is the result of his fluid line, the hashmarks and shadings that deepen the animated quality of his compositions, and the subtle vibrancy of his palette, which, from afar, can lead the drawings to be mistaken for watercolors. 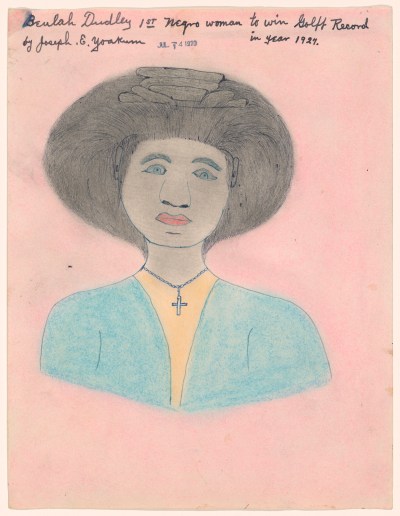 Yet, for all their wonders, Yoakum’s landscapes are best appreciated in moderation. A roomful can start to feel repetitive, dulling the idiosyncrasies of individual works. “What I Saw” offers relief in the form of Yoakum’s portraits and figurative drawings. These pieces, mostly busts, also complicate Yoakum’s fraught relationship with race. His father claimed Cherokee blood while his mother was a Black woman born into slavery. Yoakum often portrayed himself as Navajo (or “Nava-joe,” his portmanteau), largely because he feared being exploited as a Black artist, even as he drew admiring portraits of Black luminaries such as Nat King Cole. In Ella Fitzgerald Moovie Star (1966), Yoakum based his depiction of the jazz singer on a white model from an illustrated Breck shampoo ad. Maybe the source material was easier for Yoakum to trace than a photograph of Fitzgerald. Or maybe he was offering his own subliminal commentary on race, as could be the case in his 1969 drawing of the Black boxer Jack Johnson, whose figure is dwarfed by the totemic profile of the white challenger Jess Willard, who beat Johnson to become the world heavyweight champion in 1915.

“What I Saw” is an invigorating exhibition of an American original. Yoakum’s art, which he called a “spiritual unfoldment,” has exemplified the visionary tradition; this show recenters his formal and stylistic ingenuity. While some artists share aspects of his style—Georgia O’Keeffe could finesse landscape into supple abstraction, Marguerite Zorach aspired to a single visual plane, and a number of folk or “outsider” artists toy with relative scale—few so energetically mediate imagination and place, and with such conviction. A Chicago professor once told Yoakum that he’d never seen mountains in Iowa that looked like those the artist drew. Yoakum replied, “Well, that was because you never looked.”

An exhibition of more than one hundred works by Joseph Yoakum illuminates the pleasures and difficulties of the visionary artist’s immense oeuvre.