Twisted and Cute: Wong Ping at the New Museum

In “Wong Ping: Your Silent Neighbor,” catharsis was an exorcism gone awry. The Hong Kong–based artist’s titillating animations, six of which were recently on view at the New Museum, are set in a technicolor dreamworld on the fringes of a dystopian city where a cast of oddball characters attempts to peel back the layers of their desire and navigate taboos. The protagonist in the artist’s latest short, Sorry for the Late Reply (2021), develops an erotic obsession with varicose veins, in spite of conventional beauty standards that deem them unseemly. He tricks an elderly department store saleswoman into allowing him to suck one such vein out of her calf, but as he draws close to a climax, he finds himself trapped inside the vein itself. In Wong’s twisted version of the 2001 film Osmosis Jones, other characters attempt to manage delinquent desires; one of them is a woman who buys a pet chameleon on which to unload racist slurs and insults, guided by the belief that the chameleon’s ever-changing skin color will absolve her of any actual discrimination. Delivered with deadpan humor, Wong’s stories skirt vindication, instead conveying the unnamed feeling of being caught between dark human impulses and social acceptability.

Wong’s themes of social isolation and societal failure are drawn partly from his life in Hong Kong, where, amid tumultuous sociopolitical transformation, residents have faced outsize legal ramifications for past activities like protest, union participation, and political speech on social media. Last year’s sweeping national security law enabled a state-mandated shift in the taboo, giving rise to new fears far more pressing than those of the carnal—the latter being a primary theme in Wong’s work. In the claustrophobic Jungle of Desire (2015), an impotent man is forced to watch from the closet as his prostituting wife is taken advantage of by a corrupt policeman. Rather than take action, the voyeuristic husband daydreams about exacting revenge in a narrative arc that could have been torn from the back pages of a schoolboy’s notebook—complete with sex, farts, and an explosion on Sunset Peak. Interpreted partly as a response to Hong Kong’s evolving, restrictive cultural climate, Wong’s perverse visual language, with its fixation on genitalia and breasts, feels less revolutionary than juvenile, even gratuitous. Yet his work remains relevant in its shifting depictions of power and the powerless. While Wong centers the protagonist’s struggle with his supposed inability to act, the husband’s internal deliberations play out against the more dire predicament of his wife, who is the most powerless of the three characters as she is violated and loses her agency as a sex worker. The cop’s abuse of authority, the woman’s plight, and the man’s ensuing childlike revenge fantasy evoke a sense of paralysis not unfamiliar to Hong Kongers, who are coming to terms with a loss of control, or perhaps of the illusion of control, over their political future as they face increased surveillance and political censorship, and as the past years of protest are slowly erased from official history. 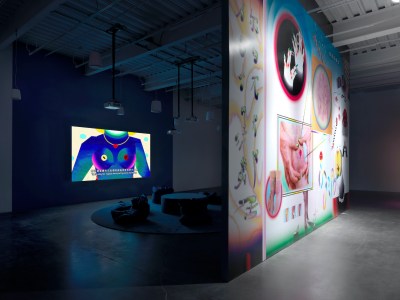 It’s no surprise, then, that Wong’s digital fairy tales, which were also on view in the exhibition, present tongue-in-cheek moral truisms that are dictated not by the common good but by the drive for individual survival. The first episode in Wong Ping’s Fables 2 (2019) follows a billionaire cow who, upon being released from jail for goring police officers at a protest, makes a new fortune selling replicas of the ripped jeans he wore at the demonstration—an empty symbol of resistance. The on-screen adage that concludes this tale, HAPPINESS IS ONLY REAL WHEN SHARED, is refuted by that of the second installment, which concerns rabbit triplets who betray one another: STRIVING FOR YOUR OWN HAPPINESS BY ALL MEANS IS ALREADY BETTER THAN SUFFERING TOGETHER WITH YOUR FAMILY. Wong’s depiction of the dissolution of the collective, while pertaining to familial rather than societal relations, strikes a chord as civil servants, academics, and students continue to be penalized for taking part in previous years’ public demonstrations.

Brimming with brutality and disappointment, gore and excrement, Wong’s disarming yarns are more potent because they are cute. Stylized title sequences evoke children’s cartoons, and the flat, rounded animation style and color gradients evoke the early internet, video games, and television of the ’80s and ’90s. The exhibition benefitted from an atmosphere of nostalgic familiarity, including an arrangement of beanbags for comfort while viewing. Wong uses cuteness not as a distraction, but as a warped mirror. Taking advantage of the mimesis that tender, playful, childish aesthetics tend to elicit, Wong creates environments in which viewers are lulled into accepting realities that are otherwise difficult to swallow.