Dread Scott, the self-described revolutionary artist and professional troublemaker, is selling his first NFT at Christie’s in New York on October 1st. White Man for Sale is a looping video of a white man standing on an auction block in the middle of a Brooklyn sidewalk.

Scott was inspired to make the piece when he first heard about the concept of a non-fungible token. “The term fungible resonated differently for me due to its use by scholars of the history of slavery,” Scott said in a press release. “People are inherently non-fungible. But as slavery became an integral part of developing capitalism, enslavers sought to make people fungible.”

When slavery was legal in the United States, the standard for a so-called tier one slave was a 25-year-old male, who was perhaps best for labor. Those of lesser value—unskilled women, children, and the elderly—according to slaveholders, were deemed second or third tier and so on. By categorizing people in this way they could be more easily converted into commodified goods. In auctioning White Man for Sale as an NFT, Scott is looking to connect the histories of capitalism and slavery to the present moment. 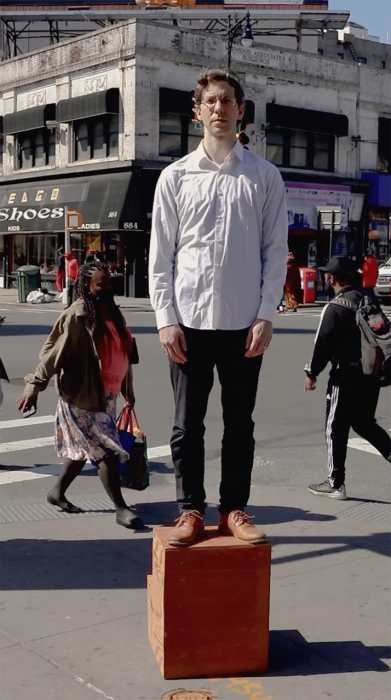 “This concept of having non-fungible tokens, taking art and talking about suddenly being non-fungible…,” Scott explained in his artist’s statement, “was something that I thought was interesting in a way that would be important to talk about the history of slavery and the history of capitalism.…”

This work comes on the heels of a lifetime of provocative work. Scott’s first major work What Is the Proper Way to Display a U.S. Flag (1989) sparked national discourse on what constituted the desecration of the American flag. Scott would end up acting as a defendant in a Supreme Court case on the subject. The Court would come to rule that federal laws banning flag desecration was unconstitutional. Since then, Scott has burned and disfigured everything from American dollars to copies of the Bill of Rights.

The auction of White Man for Sale follows the opening of Scott’s first solo exhibition at a gallery in more than 20 years. The exhibition “We’re Going to End Slavery. Join Us!,” which draws on his 2019 staged performance Slave Rebellion Reenactment in and around New Orleans, will open at Cristin Tierney Gallery in New York on September 17.

The NFT will be offered at Christie’s in New York on October 1st.